Home News What Is The Local Journalism Sustainability Act? 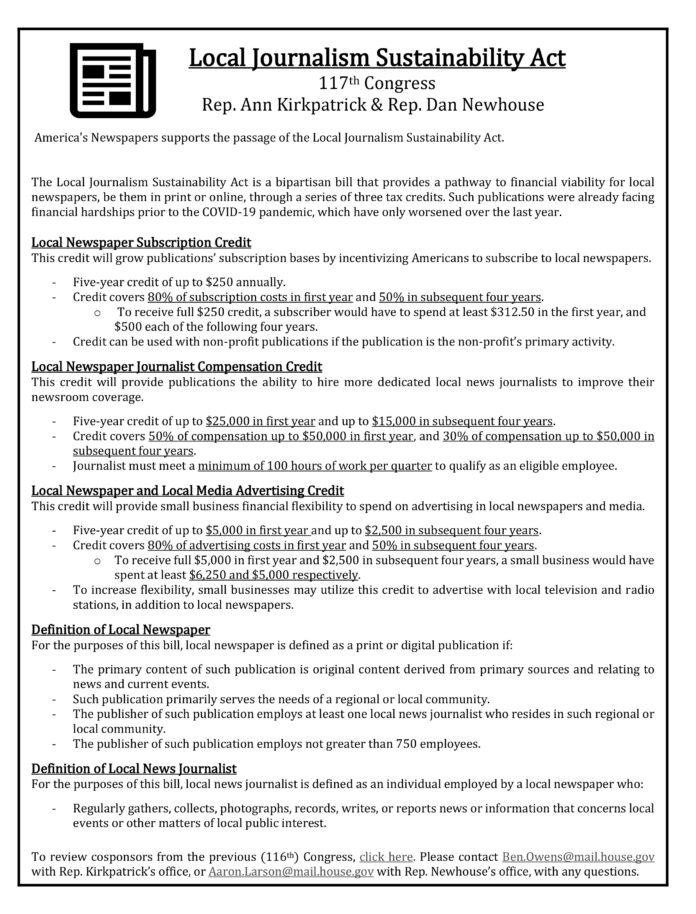 America’s Newspapers supports the passage of this legislation.

“Local journalism is a bedrock pillar of communities across the United States,” said Rep. Kirkpatrick. “Unfortunately, journalistic endeavors throughout the country face major economic struggles that put the future of many publications in serious jeopardy. These struggles existed before COVID, but the pandemic only made them more severe. We need to make sure these publications can sustain themselves through this crisis and beyond, and I believe the credits in this bill make significant progress in providing a pathway to that sustainability.”

“For many rural communities like ours in Central Washington, local news is the only way to receive important information and updates. Unfortunately, many of our locally-owned newspapers have been struggling to make ends meet,” said Rep. Newhouse. “By providing tax credits for readers and small businesses and by empowering our local journalists, we can begin to help our small newspapers remain resilient and continue to provide in-depth perspectives that inform their readership regarding local current events.”

The Local Journalism Sustainability Act offers a series of three tax credits aimed at sustaining and providing a pathway to viability for the local journalism industry in the years to come. The first credit works to incentivize annual subscriptions to local papers that primarily produce content related to local news and current events and can also be used for non-profit publications. The second credit is a five-year credit for local newspapers to employ and adequately compensate journalists. The last of the three credits is a five-year tax credit that incentivizes small businesses to advertise with local newspapers, as well as local radio and television stations.

The proposed credits in the Local Journalism Sustainability Act will encourage Americans to subscribe to local publications, help those publications retain and compensate journalists, and provide businesses and publications alike with much-needed advertising dollars.

“The ongoing challenges at local newspapers were made worse by the pandemic,” said Dean Ridings, CEO of America’s Newspapers. “The result is even more pressure to maintain newsroom positions and the critical local news gathering that is at the heart of our democracy. As local newspapers continue their progression to a sustainable digital future, the Local Journalism Sustainability Act will provide meaningful assistance as newspapers seek to provide information in new ways to meet the needs of their audience. This act will also help the local advertisers that are critical to local communities, and we are grateful to Reps. Kirkpatrick and Newhouse for their work in filing this important legislation.”

National Support for The Bill

“Local news is collapsing, threatening the health of communities and democracy,” said Steven Waldman, president of Report for America and leader of the Rebuild Local News coalition, which represents more than 4,000 locally owned and nonprofit newsrooms. “Reps. Kirkpatrick and Newhouse’s bottom-up approach is terrific — bringing serious help to local news organizations without allowing political favoritism or harm to the First Amendment.”

The Local Journalism Sustainability Act is a bipartisan bill that provides a pathway to financial viability for local newspapers, in print or online, through a series of three tax credits. Such publications were already facing financial hardships prior to the COVID-19 pandemic, which have only worsened over the last year.

This credit will grow publications’ subscription bases by incentivizing Americans to subscribe to local newspapers.

This credit will provide publications the ability to hire more dedicated local news journalists to improve their newsroom coverage.

This credit will provide small business financial flexibility to spend on advertising in local newspapers and media.

For the purposes of this bill, local newspaper is defined as a print or digital publication if:

For the purposes of this bill, local news journalist is defined as an individual employed by a local newspaper who: