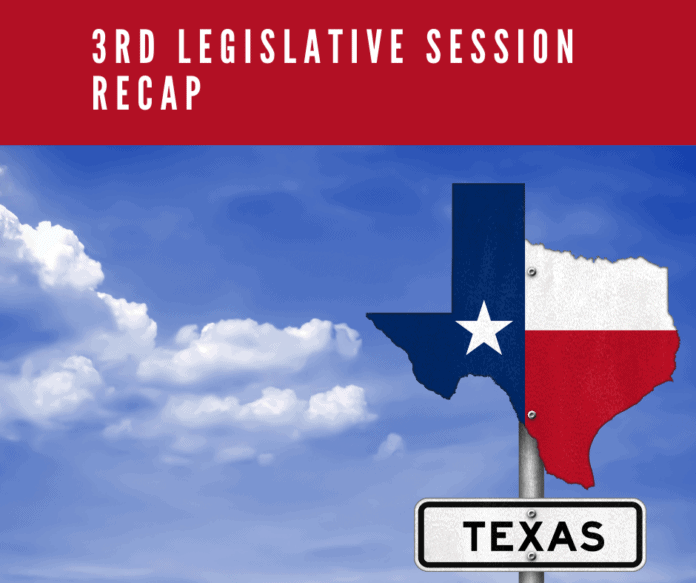 The third special session ended Monday, with lawmakers granting final approval to new maps for statehouse and congressional districts, completing a process that began almost a year ago when the Legislature opened redistricting hearings in January. Delays in census data pushed the process back months, but the Legislature reached a consensus on a map that creates two new congressional districts, one in Travis county and another in northwest Harris county, increasing the size of the state delegation in Washington to 38 seats.

Also passed Monday was a bill to allocate more than $13.3 billion in federal COVID aid sent to the state through the American Rescue Plan Act. “These dollars will help us continue to fight COVID-19, address a wide range of needs that have emerged over the past two years, and provide a major boost to our ongoing economic recovery,” said bill author and Finance Committee Chair Senator Jane Nelson of Flower Mound.

Funds Available Through End Of Next Year

The largest item in the bill is $7.2 billion to pay off debt in the unemployment insurance fund accrued during waves of COVID-related layoffs, protecting employers, said Nelson, from a potential hike in unemployment tax rates. It also includes $2 billion to cover salary costs for increased staff at hospitals and $400 million to pay for staffing needs at nursing facilities. “This money will continue to be available through the end of next year, as we brace for a potential COVID-flu double whammy,” Nelson told members.

“We are grateful to legislative budget chairs, Senator Jane Nelson and Representative Greg Bonnen, and Lt. Governor Patrick and Speaker Phelan for their leadership in passing a lifeline to businesses,” said Texas Association of Business CEO Glenn Hamer. “We also thank Governor Abbott for placing this vital issue on the special session call and working alongside the private sector throughout the pandemic. Employers were on the brink of footing the bill for pandemic related layoffs. Using ARPA funds to replenish the unemployment compensation fund protects businesses from facing increases in unemployment taxes.”

Senate Bill 8 (the ARPA Funds bill) was passed by both chambers unanimously. SB 8 includes funding for the long-term care profession in Texas to address staffing shortages as nursing facilities continue to battle COVID-19.

“This is such an important outcome for long-term care in Texas, and we are thankful to the Legislature for their support,” said Kevin Warren, President and CEO of THCA. “With all of the priorities the Legislature had to consider regarding how to spend these funds, we’re very appreciative they recognized caring for the elderly of Texas as a priority for inclusion.”

“The bill will require HHSC to develop rules for distribution of these grant programs,” continued Warren. “While there is still more work to be done, this much needed investment will help the profession’s staffing efforts and for that we are very grateful.”

This was likely Nelson’s last time to take the microphone on the Senate floor, as the seven-term senator will not be seeking re-election to the seat she’s held since 1993. Lt. Governor Dan Patrick appointed Nelson as the first woman to lead a legislative appropriations committee when he came into office in 2015. After leading the Senate’s appropriations process for four sessions, Patrick announced from the rostrum Monday that the expansive committee room in which Nelson presided over hundreds and hundreds of hours of Finance committee hearings will be named in her honor. “It’s a part of history,” he said.

Legislators also approved a measure that would permanently raise the untaxed portion of a home’s value. Subject to voter approval, SJR 2 by Houston Senator Paul Bettencourt would raise the homestead exemption from $25,000 to $40,000, which translates into around $175 in annual tax savings for the average homeowner. “This is real property tax relief for 5.7 million Texas homes,” he said.

With completion of the new district maps and federal aid appropriated, it is likely that the third special session will cap legislative activity for the year, and possibly until the Legislature meets again in regular session in January of 2023. Only slated for 140 days every odd year, in 2021 the Legislature spent almost twice that in session as Governor Greg Abbott called lawmakers back to Austin three times to deal with a number of highly contentious issues including a divisive elections bill that sparked a walkout in the House and garnered national attention.

All three sessions also saw a bill that would prohibit transgender students from participating in school sports divisions that don’t match the biological sex listed on their original birth certificate – a measure that was sent to the governor’s desk Monday. One issue that wasn’t addressed was the subject of employer vaccine mandates. Abbott issued an executive order forbidding such mandates last week and asked lawmakers to send him a bill to place that order into state law. The Senate considered such a bill in committee but with much of the business community opposed to the proposal, it failed to garner enough support to reach the floor.