Dallas Museum of Art (DMA) presents The Power of Gold: Asante Royal Regalia from Ghana, an exhibition dedicated to the royal regalia of the Asante kingdom. The exhibition runs through August 12, and brings together over 250 objects, including crowns, sword ornaments, ceremonial furniture, textiles, pectoral disks, weapons, a state umbrella, musical instruments and jewelry made of wood, silk, brass, iron and gold.

Attending a press reception April 11 was Daasebre Osei Bonsu II, Mamponghene, the second in command in the Asante traditional hierarchy, designated representative for His Majesty Otumfuo Osei Tutu II, Asantehene (King of the Asante people). The Mamponghene and his entourage traveled from Ghana to Dallas to participate in Dallas Museum of Art’s ceremonial events.

Organized by the DMA and inspired by the museum’s collection, The Power of Gold is the first American museum exhibition dedicated to Asante regalia in over 30 years. It explores the unique role and impact of gold on the development of Asante society, the economy and the arts. The exhibition is co-presented by Texas Instruments and PNC Bank.

“The DMA’s African art collection has grown tremendously in the past decade, and we are thrilled to shed new light on these exquisite objects, and on the history and culture of the Asante people, some of whom reside in our local community,” said the DMA’s Eugene McDermott Director Agustín Arteaga. “We look forward to welcoming audiences to experience this fascinating culture through the range of skill, symbolism and tradition infused in this incredible array of royal regalia.”

The exhibition is curated by Dr. Roslyn A. Walker, the DMA’s Senior Curator of the Arts of Africa, the Americas, and the Pacific, and The Margaret McDermott Curator of African Art. The Power of Gold provides insight on the Asante (also spelled Ashanti), the largest and most prominent group of related Akan (Twi-speaking) peoples in southern Ghana, and the capital at Kumasi, which is adjacent to the Ivory Coast.

Founded around 1701, with wealth derived primarily from the gold trade with North Africa and Europe, the Asante kingdom expanded through military conquest to become a powerful and dazzling polity in West Africa. The DMA’s collection of Asante regalia, which inspired the exhibition, includes a cast gold state sword ornament in the form of a standing lion, an iron state sword with an elaborate handle, a gold-leafed linguist’s (spokesman’s) staff, an intricately cast gold T-shaped bead, and a large cast gold spider. The bead and the spider ornament were owned by Asantehene (King) Kwaku Dua II (who reigned briefly in 1884) and were acquired from a Texas private collection. The odyssey of these castings will be revealed in the exhibition.

Another section uses gold weights, scales, and containers for gold dust to trace the Asante’s lucrative participation in the gold trade with North Africa and Europe. In addition to the exchange of goods, cultural exchange was an important part of the trade. The exhibition includes 14th-century Egyptian brass vessels inscribed with Arabic calligraphy, which Asante artists incorporated into the surface designs on kuduo, special storage containers for gold and other valuables. It also includes the oldest extant gold jewelry that sank with the Whydah pirate ship off the coast of Cape Cod in 1717.

A State Regalia section includes insignia and symbols of royalty and personal items of adornment worn or carried by the Asantehene (king) and his attendants and officials. This section includes gold-decorated headwear and elaborate gold sword ornaments that distinguish the king’s sword bearers; carved wood staffs with gold-leafed finials that visualize Asante proverbs and were carried by the king’s spokesmen and advisors, and cast gold pectoral disks made by lost-wax casting, hammering or gilding that were worn by other officials. This section also includes ceremonial stools and chairs carved from wood and decorated with metals and designs expressive of Asante values, and a state umbrella with a finial representing a piece of bamboo, a symbol of strength and resilience, like the king.

Royal Dress and Personal Adornment is a part of this section and includes crowns from the 19th and 20th centuries, a variety of necklaces composed of gold and other beads, elbow and wrist ornaments, amazing cast gold finger rings, and tooled leather sandals adorned with gold-leafed ornaments. There is a selection of colorful and intricately woven kente cloths, which have recently influenced Western contemporary fashion and home furnishings.

Woman: Her Role in Asante Society, where inheritance is through the female line, features sculpted wood figures and a recently commissioned double-pectoral ornament as well as a woman’s kente cloth on display.

Ghanaian Royals and African American Honorary Royals in Dallas–Fort Worth. Asante live all over the world, including in the Dallas–Fort Worth area, where they have created local societies. The photographs show them in regalia that, while honoring the past, is very much of the present. This section will also feature artifacts and portraits of a group of African Americans who were “enstooled” in 1991 in appreciation for extraordinary hospitality rendered to a visiting Ghanaian king during his visit to Dallas.

“While gold was a key driver of the Asante economy, it also became an incredibly important part of Asante culture,” said Walker. “Using sophisticated techniques, the Asante incorporated gold across many different areas of their lives, but most significantly in royal regalia and ceremonial objects. Through this exhibition, we hope to bring renewed attention to the Asante and deepen public appreciation and understanding of their history, culture and aesthetics.” 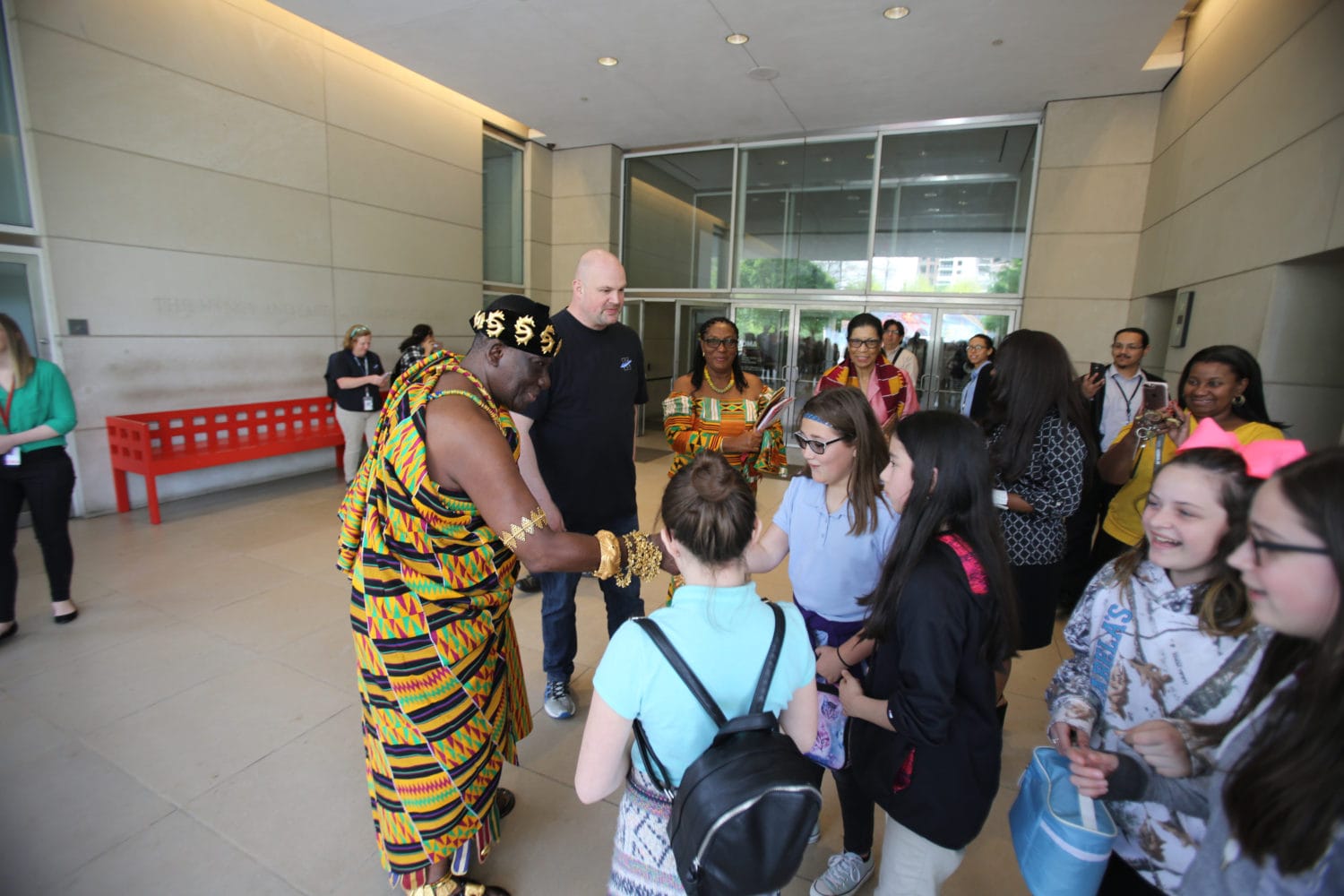