Home Commentary The Day the Christmas Lights Went On in Dallas 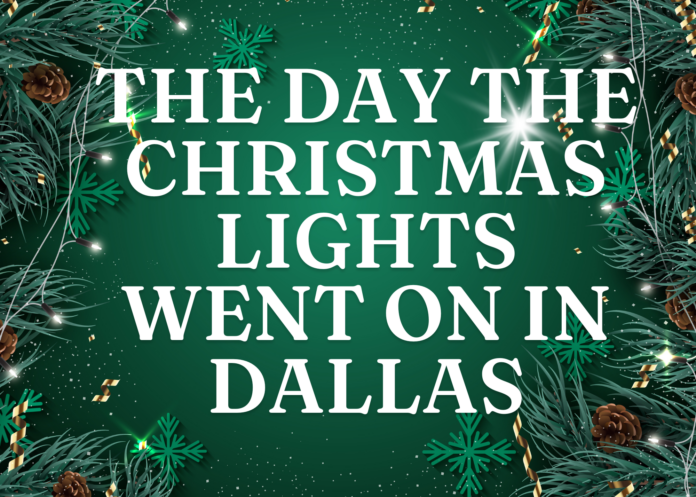 The Mountain Creek area is a beautiful part of the Oak Cliff neighborhood in Dallas, Texas. Homes are modern and well-maintained, and streets are lined with stately trees. There are large areas of green space allowing for wildlife indigenous in North Texas to flourish.

The weekend after Thanksgiving, my neighborhood in Mountain Creek was alive with families decorating their homes and foliage with beautifully colored lights. Some folks even placed Nativity or Christmas characters in their front yards.

A couple of weeks later, only my house remained undecorated. It needed to be brought to neighborhood standards.

Having only marginal carpentry skills and questionable common sense, I nevertheless attempted to decorate my own house.

Past memories of a roof destroyed by nail holes, the development of frostbite because I had duct taped myself to the chimney, and crushed shrubbery when I fell off the house, had to be erased before I could start my new decorating experience.

Because of my reputation at putting up Christmas lights in those days, I was only allowed to use duct tape. My house went from a brownish-red brick color to a sticky gray in a shade that looked like city smog.

But this year was going to be different. I purchased enough lights to rival La Guardia Airport in the night sky. My toolbox was loaded with all the equipment every light decorator needs to have a successful Christmas light presentation.

The morning of my adventure started out beautiful. Crimson and golden leaves played “May I” as they journeyed from winter branches to soft-carpeted grass. The song of a lark, carried on faint winds, comforted my heart and restored spirit to my frail ego.

Because the toolbox was too heavy, I took the crowbar, file, hedge clippers and claw hammer, and duct taped them to my waist. The tape made for a creative utility belt. Everything else went in the toolbox except about half the nails, which I placed in my mouth because of the convenience. With the extension cord wrapped around my neck, and Christmas lights in my hands, I ascended the slightly tilted ladder.

In order to find tools when I needed them, I had handcuffed the toolbox to my wrist. Pulling the toolbox up the steps was terribly stressful. About 15 feet off the ground, I became a little unbalanced, causing the ladder to slide down the side of the house.

Fortunately, the car hood was there to help break my fall. Bouncing off the hood caused the utility belt to shift positions, placing the crowbar just about at knee length under my belt buckle. I must have been unconscious for about 30 minutes, when I was awakened by the beautiful voice of the lark.

Taking heart from his song of inspiration, I readjusted my utility belt, (leaving the crowbar on the ground), removed the glass from the broken bulbs from out of my ears, spit out what nails I hadn’t swallowed, reset the ladder, and again ascended towards the heavens.

I decided just to put lights on the chimney, since the edge of the house appeared to be a little too dangerous. From my roof-top vantage point, I noticed that a small crowd of neighbors had gathered across the street. This gave me confidence to do my best on the light assembly.

About 30 minutes passed and I was making good progress. I had begun to place lights on the crown of the roof, running the length of the garage. I nailed each light down, and then used duct tape to stick the wiring to the roof. This seemed to cause less damage to my roof and I tended to use the chain saw less. By now the crowd had grown large, and I could tell they were admiring my work, because they kept pointing at the house.

I was just about to finish, needing to nail only a few lights down, when my foot slipped. Losing my balance, I began to slide down toward the edge of the roof.

About halfway down the roof, the toolbox sped past me, accelerating my descent. The toolbox went over the edge, and my wrist followed suit. In one desperate ploy to postpone my demise, I took my claw hammer and hooked the rain gutter, stopping my fall.

There I hung, holding onto the hammer, with my toolbox still attached by the handcuffs.

Hanging there like that gave me the opportunity to replay the day’s activities and review any possible mistakes. Joining me in my deliberations was the sweet sound of the meadowlark.

After about an hour of dangling, I was becoming very uncomfortable. Suddenly, my duct tape utility belt began to slip, taking hide from my stomach, while pulling my trousers down to my knees. I tried reaching the belt in an attempt to dislodge some of the equipment, but by then the belt and my pants had slipped to my ankles. The only thing holding that belt on was the fact that the hoe file had become embedded in my foot.

I must have hung there for several hours, passing in and out of consciousness, the taste of bent nails in my mouth. The only thing good about being unconscious was that I didn’t have to listen to that #*#*#* lark any more.

Durhl Caussey is a columnist who writes for papers across America. He can be reached at this paper or durhlcaussey@gmail.com

We Should All Learn To Fight Like Coach White