CEDAR HILL, TX – Seth Dannheim was selected to the 2020 Longhorn Legacy Athletic Hall of Honor last month.Even though the induction ceremony has been postponed indefinitely due to COVID-19, Dannheim’s excitement has not waned.

“Former CHISD Athletic Director Gina Farmer left a voicemail with the news, and when Seth listened it he was pretty emotional,” said Karen Dannheim, Seth’s mother. “He kept saying he was so honored. Then, he got really excited and said he had to go buy a suit and get his speech ready. This means that all of his hard work paid off, and that CHISD recognizes that everyone is valuable and has something to offer.”

Dannheim’s selection to the Longhorn Legacy Athletic Hall of Honor is historic because he is the first inductee who has Down Syndrome. A 2008 Cedar Hill High School Graduate, Dannheim has volunteered at Plummer Elementary School for the past few years.He was nominated by longtime Plummer Physical Education Teacher Shelly Williamson.

“I met Seth when he was 5 years old, and I coached his Kindergarten basketball team,” Williamson said. “I have coached his Special Olympics teams since 2002. He is a great volunteer at Plummer. He really enjoys working with the scholars in the gym, and he also helps our during lunches with the custodian. Seth is energetic, and he gives me life. The entire staff at Plummer absolutely loves Seth. I couldn’t imagine the Plummer Gym without him.”

During his time at CHHS, Dannheim competed on the Cross Country Team and served as the Girls Varsity Soccer Manager and the Junior Varsity Girls Basketball Manager. He competed in Track & Field, Basketball and Bowling in the Special Olympics and also became a certified Special Olympics coach.

“It was fun cheering on the teams from the sidelines and going on the bus to away games,” said Dannheim, who began his time with CHISD at Waterford Oaks Elementary, before attending Highlands Elementary, Beltline Intermediate and Permenter Middle School before CHHS.

Karen Dannheim said Seth’s opportunity to work with scholar-athletes at CHHS was a great opportunity for him.

“It gave him time with role models he might not otherwise have known,” Karen said. “It allowed him to be involved with after school activities and programs. Most importantly, he was recognized as part of the time. He was so excited when his name and manager title were on the team t-shirts, along with the players names.”

If being inducted into the Hall of Honor itself wasn’t exceptional on its own, Dannheim’s older sister, Callye Dannheim Emmons, will be inducted as well. She was a First Team All-District Member of the 2003 CHHS Girls Soccer Team that started with a 16-0 record. She went on to play NCAA Division I Soccer for Rice University in Houston.

“It’s pretty awesome,” Dannheim said. “Hearing that my sister and her soccer team are getting recognized too, that just makes me feel happy.”

Said Emmons, “My brother has worked incredibly hard his entire life, and to be included with such distinguished company that may not have had near as many personal obstacles is a celebration beyond words. Seth is a uniquely capable person and I could not be more honored to be his sister each and every day – the Hall of Fame induction is simply another remarkable success on an already exhaustive list of achievements.

Karen and Mike Dannheim said it will be outstanding to see both of their children inducted into the Hall of Fame – when the induction ceremony takes place.

“Seth and his sister have always been close, so for both to be inducted at the same time is just perfect,” Karen and Mike said. “Callye has always been his No. 1 supporter.”

After high school, Dannheim attended Eastern New Mexico University-Roswell, which has a program for students with special needs. He interned at several jobs during that time, including Walgreens and Ace Hardware.

Upon returning to Texas, he worked at a distribution center in Ellis County for several years.

Being at Plummer with Williamson has been a great experience, said Dannheim.

“I help the students and teachers, and I try to be there for them,” Dannheim said. “I try to do the right thing and be a role model for the scholars.”

Although he misses the teachers and scholars at Plummer, Dannheim has been making the most of the quarantine.

“Being with my family and exercising makes everything great,” Dannheim said. “We also rescued a dog from the shelter at the beginning of Spring Break, so I like playing with the dog.” 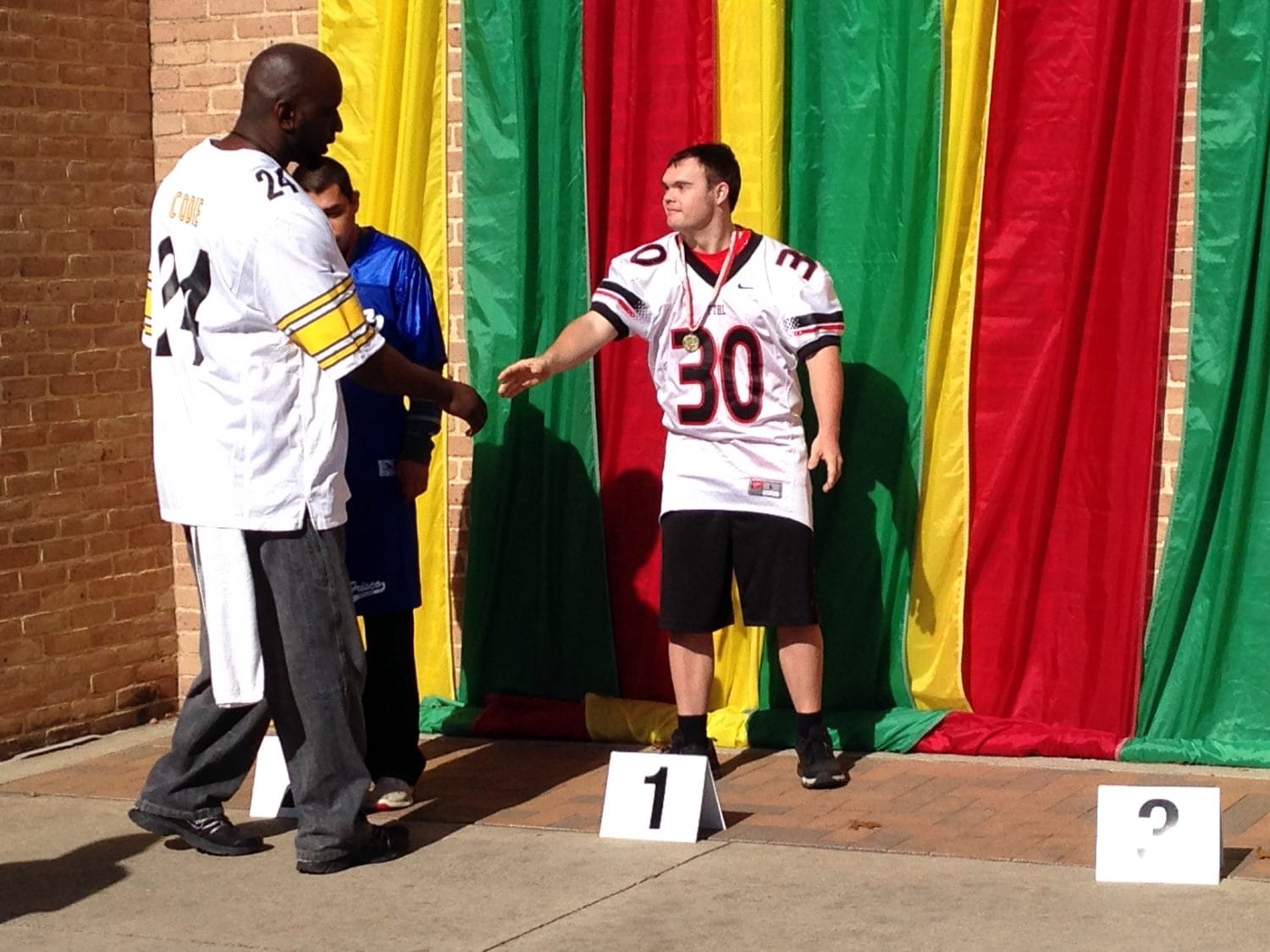