Sirens Blared & Reports of Tornado On I-35 E Near Forreston

UPDATE: The National Weather Service determined that an EF-2 tornado with winds up to 120 MPH occurred between Forreston and Waxahachie last night from 8:44 pm to 8:57 pm. It tracked 5.2 miles through the area between Waxahachie and Forreston where it crossed I-35E. 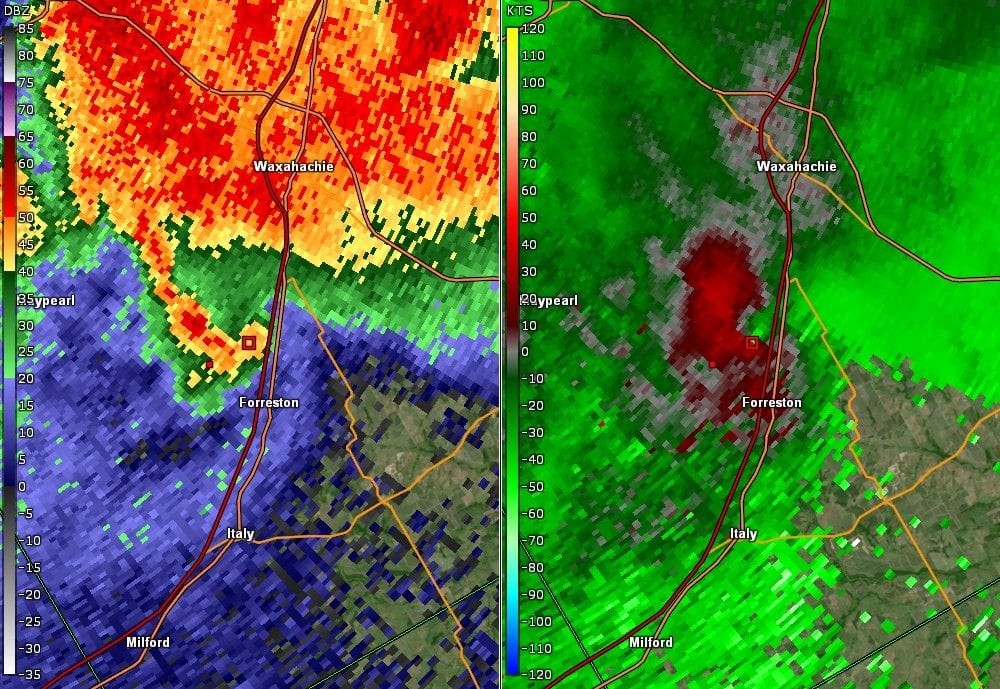 ELLIS COUNTY – As severe thunderstorm and tornado watches and warnings moved through Ellis County Monday evening, officials said it was likely a tornado that passed over I-35 in Waxahachie and caused motorist injuries.

Ellis County Public Information Officer Corey Rogan said around 11:45 p.m. Monday night “A multi-vehicle incident has occurred on I-35E near Forreston.” On the scanner calls for additional resources went out to respond to multiple overturned 18 wheelers with entrapment.

Rogan said it was believed a tornado had touched down on the highway, leading to the accident, which closed that section of I-35 down for hours.

Southbound traffic on I-35 was being re-routed onto 77 as of about midnight Monday night and emergency services were transporting individuals from the scene. Motorists reported being stuck in traffic for hours while first responders arrived and worked to clear the scene.

Power was also down in the area just after the storm. Rogan said Encore Electric was in route to the area to restore power. Mobile homes and businesses sustained severe damage. According to Judge Little, about fourteen people sustained non-life threatening injuries.

Officers also remained on the scene until the morning hours searching the Forreston area for those who needed assistance. DPS, AMR, and the Red Cross were aiding a search and rescue effort near the incident site where cars were damaged.

Videos showed three 18-wheelers, common on I-35 in Waxahachie, tossed around like match cars. The Texas Department of Public Safety reported at least three drivers were taken to nearby Baylor Scott & White Medical Center in Waxahachie. According to DPS one of the drivers was in serious condition, the other two are reportedly alright.

All lanes have been reopened this morning

Rogan said “The National Weather Service will survey damage in the morning.” Moments ago the NWS Ft. Worth tweeted teams are on the way to the area to survey the damage.