Roadster anyone? The all new 2016 Mazda MX-5 Miata cannot be topped. Standout features this year include upgraded safety features, more technology, a lighter body-weight and spunky performance putting this reasonably priced soft top on the road to success.

Even though it is small inside and out, you still get all the goodies that you need, like an infotainment system with a seven-inch touchscreen. Indeed, the Miata has a lot of class.

The competition, if you want to look at other options, will be hard to find. There simply are no other two-seaters in the price range of the Miata that are fun to drive. From inception to the current day, there is only one vehicle in the same class as the Miata.

The 2016 Mazda MX-5 Miata has three trim levels to choose from: the Sport, the Club and the Grand Touring. The Sport will give you 16-inch alloy wheels, manually retractable soft top with a glass rear window, a push button ignition, LED headlights and taillights, leather-wrapped steering wheel and shift knob, cruise control, all power and techno goodies like Bluetooth and audio connect with six speakers and a USB port and auxiliary audio jack.

Moving up to the Club level there are choices that vary depending on the transmission. If you opt for the manual, you will get the best roadster ride with a sport-tuned suspension, shock-tower brace and limited-slip differential. There are also 17-inch wheels, sport front fascia, rear lip spoiler, roll hoops, red interior stitching and a bit nicer interior trim with nine speakers and dual USB ports. You also get the seven-inch touchscreen with a control knob located on the center console.

The top of the line Grand Touring model comes with an automatic transmission, adaptive headlights that have automatic high beams, auto-dimming and heated mirrors and seats, automatic wipers, cloth-lined top with leather upholstery, a navigation system and a safety package with blind-spot monitoring, rear cross-traffic alert and lane departure warning.

Under the hood, the 2016 Mazda MX-5 Miata is rear-wheel-drive with a 2.0-liter four-cylinder engine that has 155 horsepower and 148 pound-feet of torque. The six-speed manual comes standard, but an automatic can be had with a steering-wheel-mounted shift paddle on all the trim level choices.

Safety on the 2016 Miata includes anti-lock disc brakes, side airbags and stability and traction control. The high end Grand Touring trim adds the blind-spot monitor and lane departure warning as well as the rear cross-traffic alert.

Since the 2016 Mazda MX-5 Miata is a convertible in the coolest sense of the word, the manual convertible top is easy to pop up and down just as it should be. In fact, once you get the hang of it you will be able flip the top up and back while sitting in the car. It certainly doesn’t get much easier than that.

Don’t plan on taking anything with you when you are out driving this Mazda though because the trunk space is a mere 4.6 cubic feet. Inside the Miata it is equally small so the head and legs will be a little cramped until you can get that top down.

In such a tiny space it’s also good to know that the knobs and dials are all placed easily for use and even in the base trim you get phone and audio connectivity.

As for driving the 2016 Mazda MX-5 Miata its fun and you can feel the spunk as it takes the road and handles the curves. The sporty little Miata looks good too – count it as a part of your weekend warrior package and get ready to take the open road by storm discovering new heights while also enjoying the breeze.

Should You Need to Know:  The redesigned 2016 Mazda MX-5 Miata surprisingly weighs 200 pounds less than the earlier version. 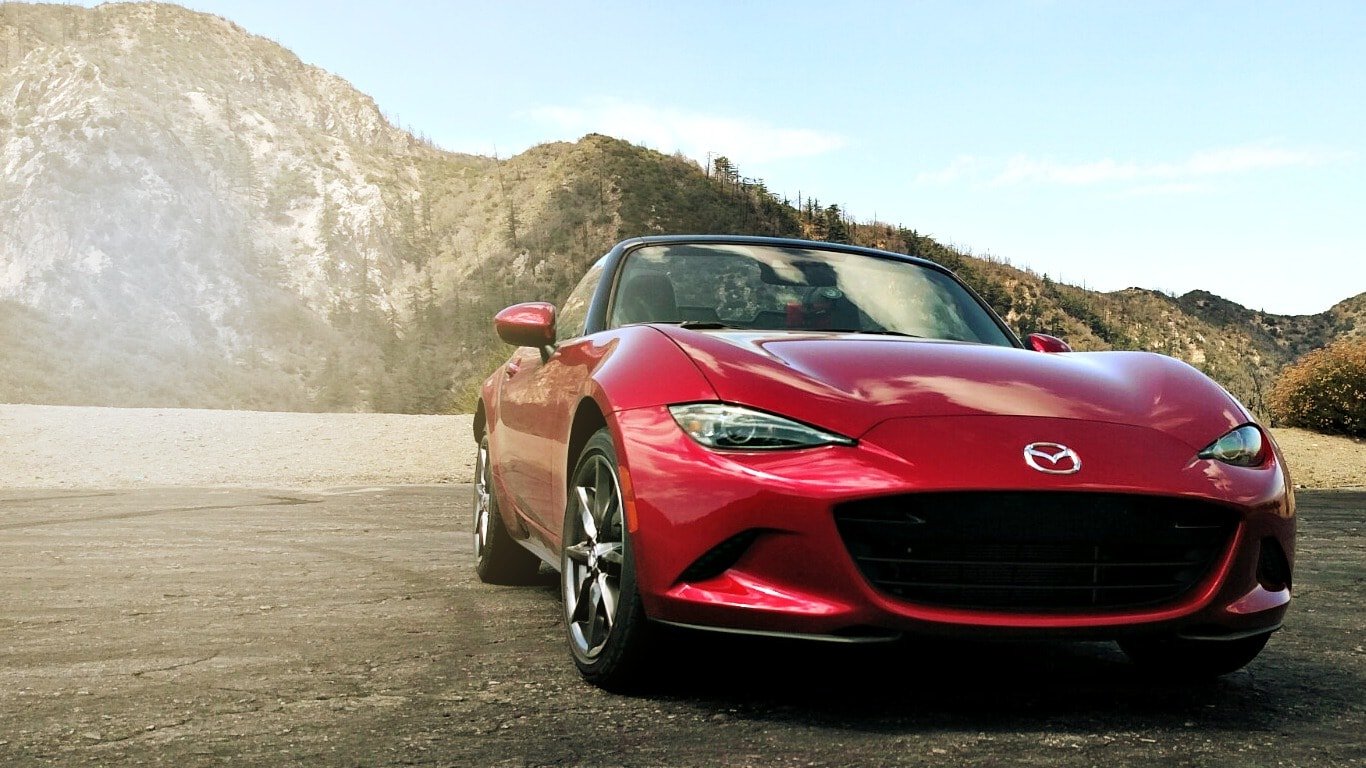