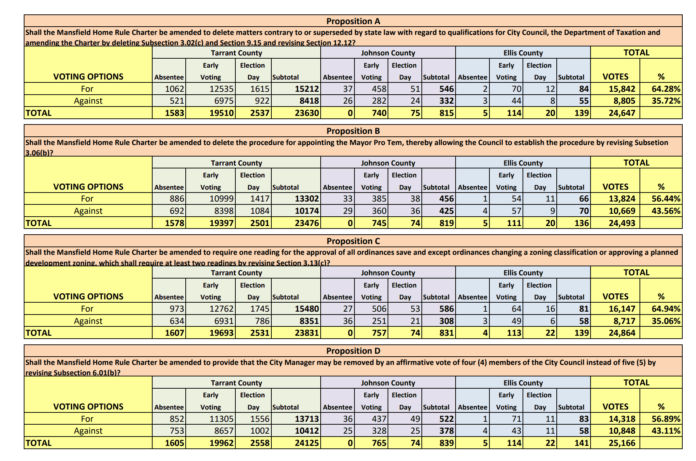 Runoff For Mansfield Mayor On December 8, 2020

In the November election Mansfield voters had seven propositions to vote on, creating a lengthy ballot. All seven of the propositions were amendments to the Mansfield Home Rule Charter, needed to update the charter. There will be a runoff election on December 8 for Mayor of Mansfield between Michael Evans and Brent Newsom.

Mr. Evans released a video on his campaign Facebook page saying “zero negativity” will be tolerated as they continue to campaign for Mayor. At the time of publication, Mr. Newsom had not released or published a statement on his campaign page.

Mr. Bowman posted this on his campaign Facebook page, “You’ve probably heard, there was no clear winner for Mansfield City Council Place 2 in Tuesday’s election. The top two finishers, myself and Tamera Bounds, will be heading to the December 8th runoff election. Early voting opens the Monday before Thanksgiving (11/23). Specifics on dates, times and locations will be available later. I hope those that supported me in the November 3 election will continue their support and come vote for me again in this runoff election. I appreciate each and everyone of you who have come out to show your support. If you would like to help in this runoff election please send me a message.”

Ms. Bounds shared the following on Facebook, “First, I want to take a moment to thank all that ran a great Campaign! We all worked very hard and often together to make sure the voters were informed and had what they needed to vote. This is part of our wonderful democracy process that gives us a voice to choose! I feel like in some way, it was participating in historical moments that blazed a path no one has gone through before! And it was a journey I will not forget!

I want to thank all of you that came out to vote in the heat, cold and rain to show your support for me! I especially loved talking to everyone of you that I met! My volunteers were phenomenal and their dedication was unwavering, even when the weather was intolerable! Last night’s numbers for City Council Place 2 blew me away and is very encouraging. I came in with a total of 10,108 votes or 42.96% of total votes, y’all!!! I feel Blessed!! Thank You! Thank You!

However, the citizens of Mansfield are not yet done. Now, I go to a run off with my opponent, Scot Bowman, who came in with 31.71% of total votes.
I will need everyone of you that support and believe in me to be the right choice for Mansfield City Council Place 2 to come back to the polls and vote for me again! I need that same enthusiasm and support to continue to be the fuel to drive my race!” 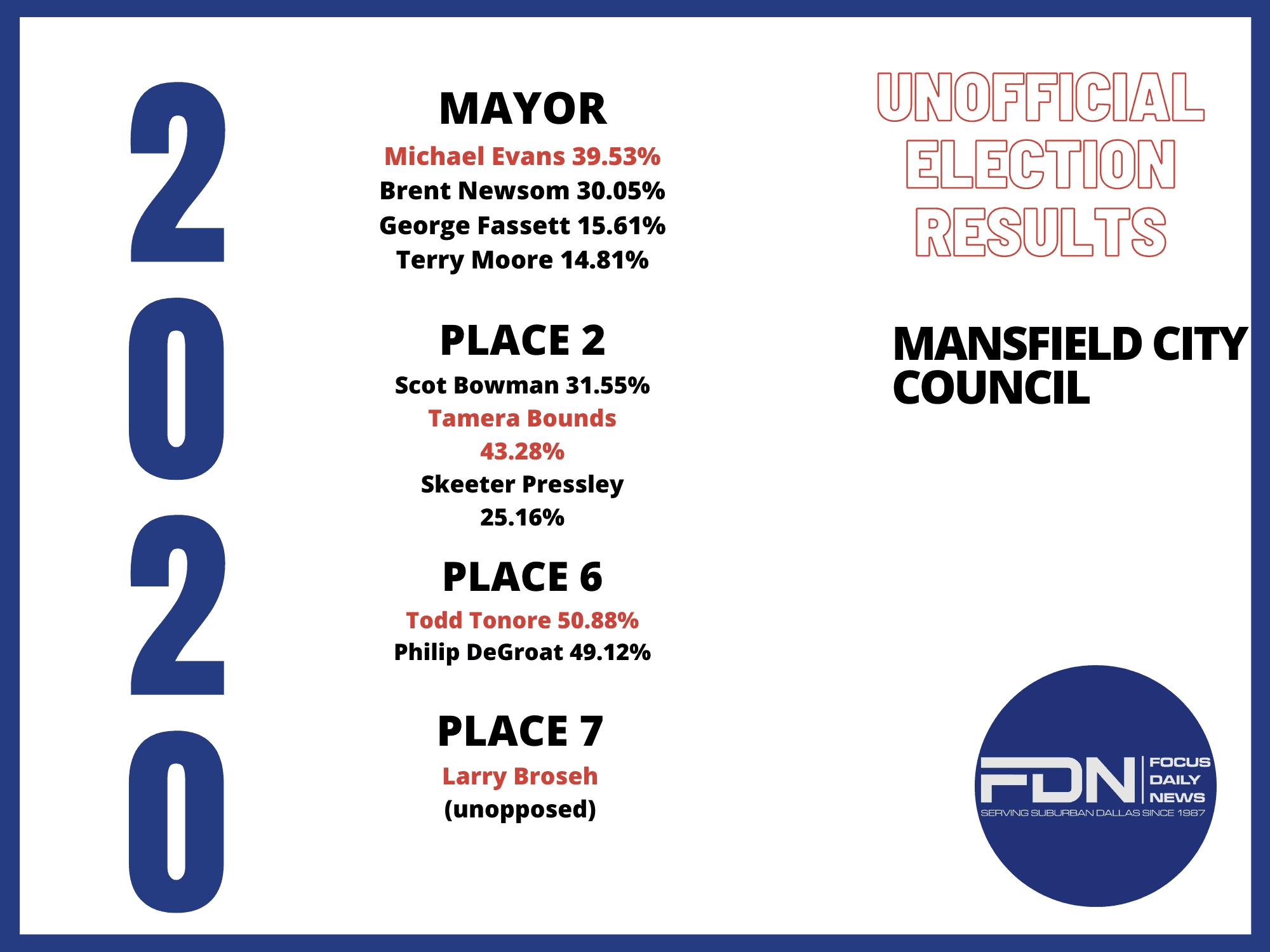 Shall the Mansfield Home Rule Charter be amended to delete matters contrary to or superseded by state law with regard to qualifications for candidates for City Council, the Department of Taxation and amending the Charter by deleting Subsection 3.02(c) and Section 9.15 and revising Section 12.12?

The City of Mansfield Charter has sections that are contrary to what has been approved by the state legislature. Since these sections are superseded by state law, this proposition would remove them from the city charter. Those sections and changes include:

Shall the Mansfield Home Rule Charter be amended to delete the procedure for appointing the Mayor Pro Tem, thereby allowing the Council to establish the procedure by revising Subsection 3.06(b)?

Shall the Mansfield Home Rule Charter be amended to require one reading for the approval of all ordinances save and except ordinances changing a zoning classification or approving a planned development zoning, which shall require at least two readings by revising Section 3.13(c)?

Currently Section 3.13(c) of the charter requires three readings of an ordinance to be considered and approved before the City Council. The proposition would require one reading on ordinances except zoning changes which would require at least two readings, with a possible third and final reading should the City Council vote to approve a third reading.

Shall the Mansfield Home Rule Charter be amended to provide that the City Manager may be removed by an affirmative vote of four (4) members of the City Council instead of five (5) by revising Subsection 6.01(b)?

Section 6.01(b) of the charter currently requires at least five members of City Council vote to suspend or remove the City Manager from their duties. This proposition would require at least four members of Council.

Shall the Mansfield Home Rule Charter be amended to require members of the Planning and Zoning Commission be residents, but need not own property in Mansfield and to delete the requirement that a member resign their position before running for City Council by revising Section 10.01?

Currently Section 10.01 requires that members of the Planning and Zoning Commission not only be residents but also own real property in the city. This proposition would amend the charter to require that residents who do not own real property in the city may serve on the commission. It would also delete the requirement that any P&Z commissioner seeking to run for City Council must resign their position before running.

Shall the Mansfield Home Rule Charter be amended to provide that a quorum of the City Council shall be four (4) Council Members, that three (3) members shall be required to call a special meeting or to approve an emergency ordinance by revising Sections 3.09 and 3.14?

*These are unofficial results as posted by the City of Mansfield*