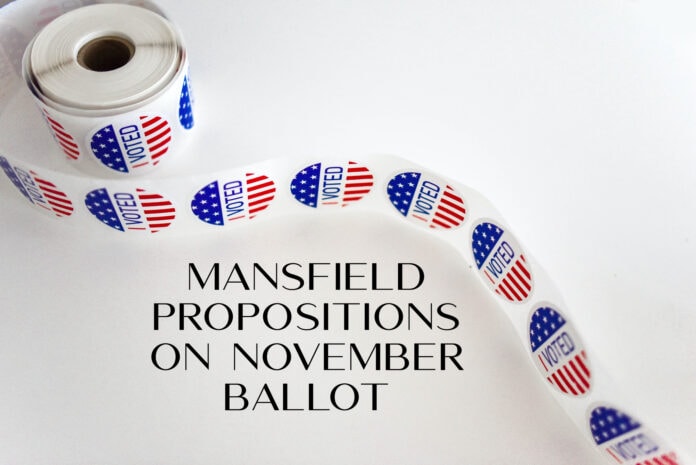 According to Councilmember Casey Lewis, Mansfield City Council met and identified seven areas that needed to be addressed due to a conflict with either state or federal law or the processes or procedures are outdated.

Councilmember Casey Lewis said he personally supports all seven of the propositions on the ballot. We’ve compiled explanations below based on information Mr. Lewis provided in a video on Facebook.

Shall the Mansfield Home Rule Charter be amended to delete
matters contrary to or superseded by state law with regard to qualifications
for candidates for City Council, the Department of Taxation and amending the
Charter by deleting Subsection 3.02(c) and Section 9.15 and revising Section
12.12?

Explanation of Subsection 3.02 (c): City attorney has advised the Council that they can not require that a candidate “not be indebted to the city”.

Explanation of Section 9.15: This is handled by the Tarrant County tax assessor, so this isn’t necessary.

Explanation of Section 12.12: Due to updates, they are changing the section number.

Shall the Mansfield Home Rule
Charter be amended to delete the procedure for appointing the Mayor Pro Tem,
thereby allowing the Council to establish the procedure by revising Subsection
3.06(b)?

Explanation: Mayor Pro Tem is an elected position that’s voted on by the Council. The seven members of the City Council vote on this position. Basically the Mayor Pro Tem is the “substitute” for meetings when they Mayor is absent. So if the Mayor is unable to attend an event or a meeting, the Mayor Pro Tem would fulfill his duties. With the delay of the May election due to COVID they could not elect a Mayor Pro Tem, thus they want to remove this from the charter. Councilmember Lewis says most cities do not have this as part of their charter.

Shall the Mansfield Home Rule
Charter be amended to require one reading for the approval of all ordinances
save and except ordinances changing a zoning classification or approving a
planned development zoning, which shall require at least two readings by
revising Section 3.13(c)?

Explanation: This is a procedural rule for ordinance changes for the City Council. It currently requires two public hearings, and three public readings of the ordinance. Because of the process and requirements it takes 6-8 weeks from the time the ordinance is on the agenda. Proposition C merely changes the timeline for the process while still allowing the same number of hearings, but eliminates the third reading of zoning ordinances. Casey Lewis has a great explanation of how the proposition effects planning & zoning in his video.

Shall the Mansfield Home Rule
Charter be amended to provide that the City Manager may be removed by an
affirmative vote of four (4) members of the City Council instead of five (5) by
revising Subsection 6.01(b)?

Explanation: City Council Members are elected positions, they are voted on and chosen by Mansfield voters. However, the City Manager position is hired and that job is to implement the policies enacted by the City Council. Requiring five councilmembers to agree on anything is difficult with new council members coming in during a new term. (3 year terms) This amendment just reduces the votes required from a “super majority” to a “simple majority.” Mr. Lewis explained that the current City Manager, Joe Smolinksi, supports this amendment.

Shall the Mansfield Home Rule
Charter be amended to require members of the Planning and Zoning Commission be
residents, but need not own property in Mansfield and to delete the requirement
that a member resign their position before running for City Council by revising
Section 10.01?

Explanation: City attorney says you can’t require someone to own property. A Planning & Zoning Commissioner could also run for City Council and if elected they would be required to resign their position.

Shall the Mansfield Home Rule Charter be amended to provide
that a quorum of the City Council shall be four (4) Council Members, that three
(3) members shall be required to call a special meeting or to approve an
emergency ordinance by revising Sections 3.09 and 3.14?

Explanation: This amendment is to address/prepare in case there was a catastrophic event where council members couldn’t physically come together. For example a mass casualty event that prevented council members from physically meeting, this allows three members of council to call a special meeting, and allow four members to act on emergency ordinances.

We encourage you to watch the video from Casey Lewis or email him with any questions campaign@caseylewis.com.