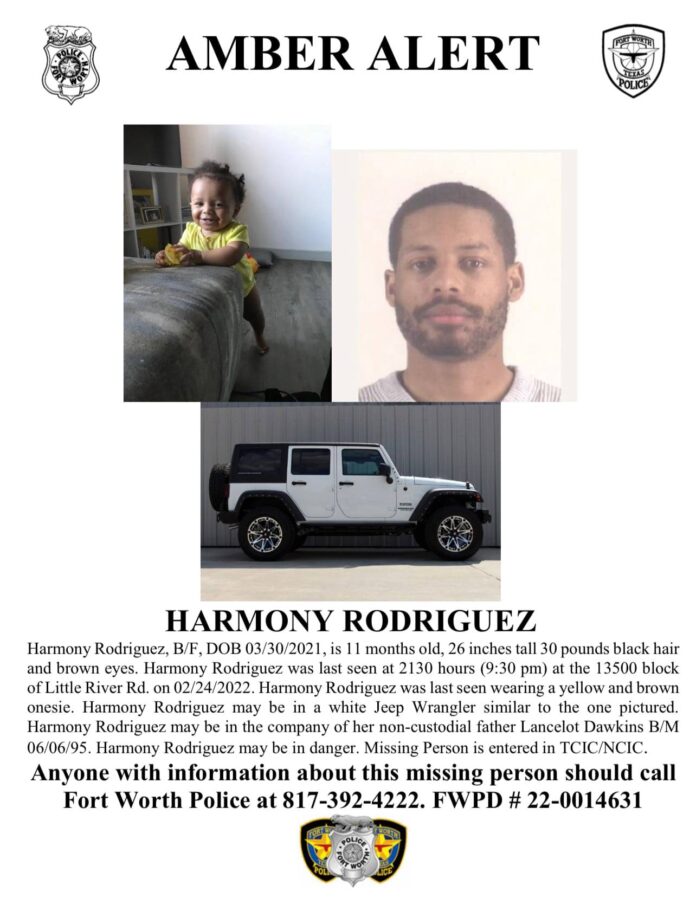 Suspect has been taken into custody.

(Fort Worth, TX) – An Amber Alert Friday morning regarding a child abduction in Fort Worth
involved a man who had just been released by a judge on bond from jail in Tarrant County.
Lancelot Dawkins, who is believed to have taken his 11-month-old daughter after choking her mother, was released from Tarrant County Jail Thursday, February 24, after posting a $3,500 bond.

This came after Dawkins, 26, bonded out from jail in January, on a charge of assaulting a
family member by impeding breath or circulation. Tarrant County Magistrate Brooke Panuthos set that bond at $3,500.

After he was released from jail in January, Dawkins apparently fled Texas, believed to be
headed to Nevada. His bondsman filed paperwork January 28 saying Dawkins could not be
contacted and asked that his bond be held insufficient. An arrest warrant was issued January 31, 2022.

Dawkins was booked into the Tarrant County Jail on Wednesday and a judge released him
again from jail within 24 hours. District Court Judge Chris Wolfe set his bond at the same
amount it was in January before the warrant, at $3,500.

“Judges set bonds,” Tarrant County Criminal District Attorney Sharen Wilson said. “That is why judges have assessments and criminal histories available to them.”

Police are still looking for the baby, Harmony Rodriguez, who is Black and has black hair and brown eyes. She weighs about 30 pounds and was last seen wearing a brown and yellow onesie.

Police believe Harmony may be in danger. Dawkins was last seen driving a white Jeep
Wrangler.

Anyone with information about Lancelot Dawkins should contact the Fort Worth Police
Department at 817-392-4222.