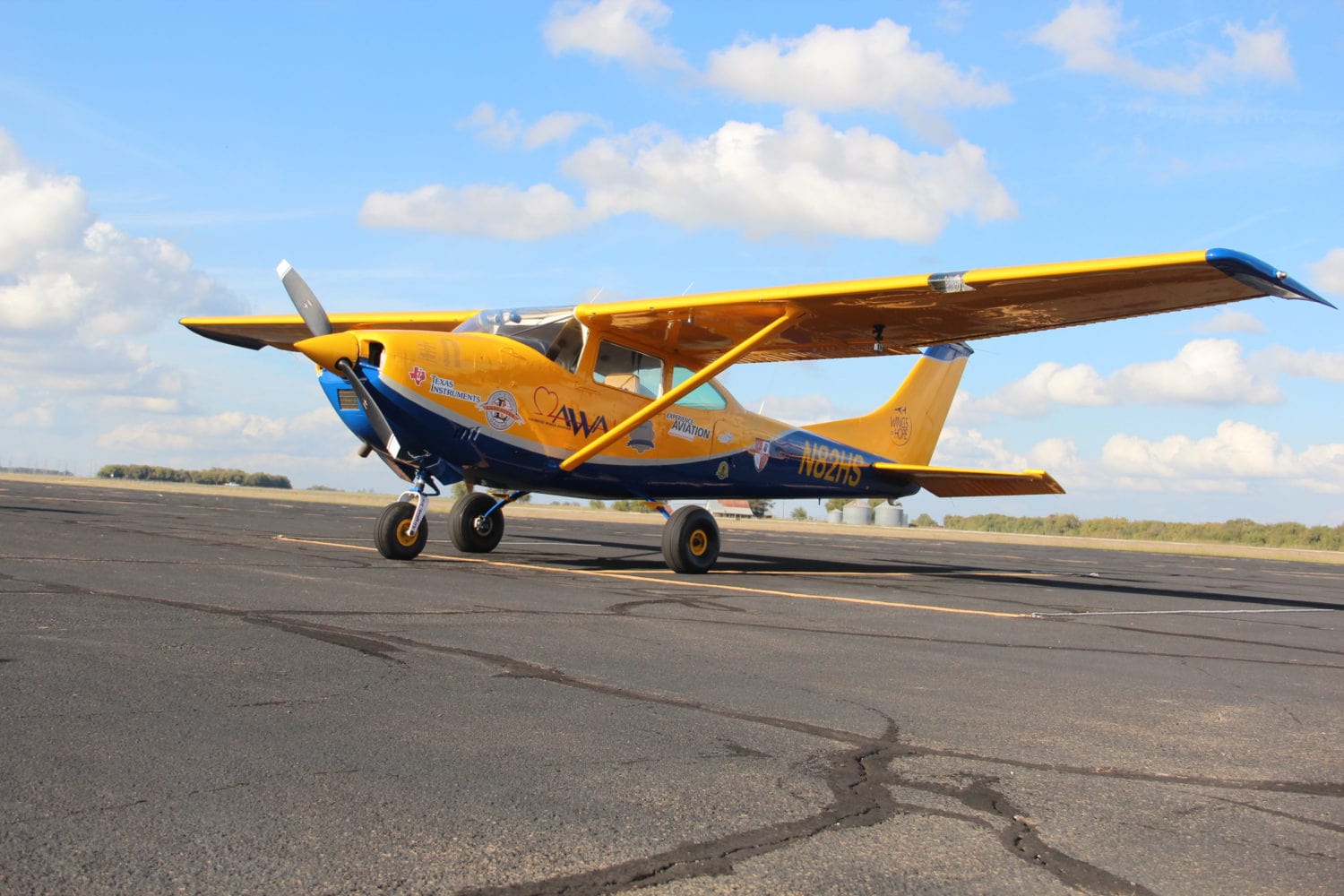 A group of Lancaster ISD students recently completed an unusually challenging STEM project. The 39 engineering students, grades 6-11, built an airplane. One that flies!

Josh Hoffman, owner and lead engineer of Cross Country Aviation, was the students’ instructor during the project. The student-built plane will be used by Wings of Hope, a nonprofit helping those in need all over the world.

The 4-seater Cessna 182 single-engine airplane was unveiled on a windy Friday afternoon at Lancaster Regional Airport October 20. The Wings of Hope pilot flew the plane over the city of Lancaster with Executive Director of Academics and Innovation Kyndra Johnson in the co-pilot seat for the flyover.

Wings of Hope has been involved in worldwide humanitarian missions since sending its first plane to Kenya in 1965, assisting a nun in providing medical care to their famine-stricken people. The Cessna will be used by Wings of Hope’s partner, Adventist World Aviation, to provide emergency medical air transport to people living in remote communities in Nicaragua.

“We think the benefits of the program are twofold for the students,” said Wings of Hope President and CEO Bret Heinrich. “Number one is obviously the hands-on STEM learning they experience as they work on the plane. Number two is the service learning aspect. Wings of Hope is a mission-based organization, so these students have an opportunity to see the impact of their work in the real world as the plane they worked on is dispatched around the globe for humanitarian relief.”

Steve Long, Wings of Hope’s director of hangar operations, said the organization specifically donated a plane that could be used for humanitarian relief.

“It was chosen so that the students would work on an airplane that had a future of helping others,” Long said. “So what they did to that airplane wouldn’t stop with that particular plane, but it would go on. The work they did isn’t going to sit in a garage or in a hangar. It’s going to go and help others.”

Lancaster High School Pitsco STEM Lab Facilitator Charles Richardson, who has worked with these programs since their start in the district, was especially thrilled to watch the students’ plane fly. He said, “When students get to the high school, STEM is no longer just science, technology, engineering and math. It is Striving To Empower Minds because when you empower a child, though they have never seen a plane, they can help build one. I thank God that I get to come to work every day and work with these students and to have days like this that you will always remember.”

Parents of the STEM students shared their excitement at seeing the plane fly. Kim Wesley, mother of Jaqkolbi Wesley, said, “I love the fact that my son was able to participate in such a notable project, my family and I were completely over-joyed. This meant a lot to my son, we were just happy and thankful that he had this opportunity. Not many high school students can say that they helped build an airplane!!! We were happy and excited for this opportunity, we believe this will help our son in his future engineering endeavors.”

“I hope that my son and other students realize from this project/learning challenge that they are capable of doing anything, this learning challenge was just the beginning for several of these students as well as my son. I hope they realize that the sky’s the limit for them, through hard-work and dedication they can accomplish any goal that they set for themselves,” she added.

Tenth grader Elizabeth Millard said she participated in the project because “I thought it would be a good experience for me since I am going into Mechanical Engineering. I thought it would help me out and it seemed fun and it was. We did a little bit of everything. We took down engine, wired the wings, painted some of the parts on the planes and sandpapered the whole plane.”

“I chose to focus on a career in mechanical engineering because it is the thing for me. It really does not matter if you are a girl or a guy, you are still a person. If you want to be a mechanical engineer, building planes or working on cars, you can do it. As a mechanical engineer, I want to work on cars and things like that,” she said. “Planes and cars are similar, they both have an engine attached to it moving. The experience for me was that you get to learn more about the engine and where the parts go and how to wire things, and what hooks up or connects to what.”

Elizabeth said, “When I saw the plane in the sky it was so exciting! It made me very happy to know that we did not mess up! We built this thing–a plane that could help hundreds and thousands of people! It was a nice experience. I would tell people to do it even if you do not like engineering. You should just experience it because the end product is amazing!”

In 2014 the LISD STEM students built a Factory 5 Subaru 818S Car in partnership with Experience Aviation: Operation Build & Soar, Captain Irving, and Lancaster ISD. Over a three month period, students built, refined, painted and put finishing touches on a car that could be driven on city streets.