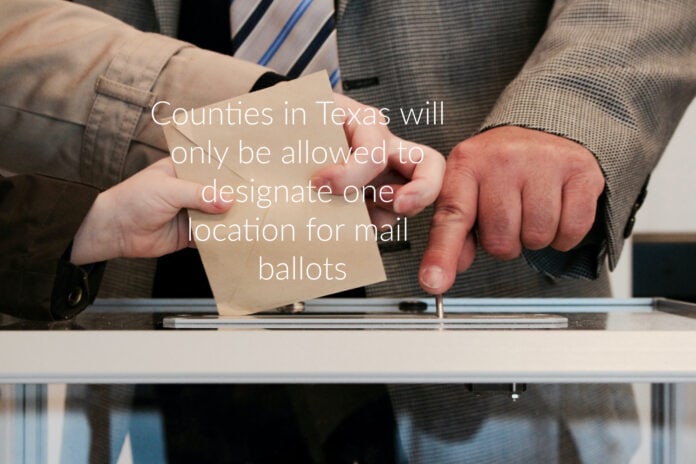 “”The State of Texas has a duty to voters to maintain the integrity of our elections,” said Governor Abbott. “”As we work to preserve Texans’ ability to vote during the COVID-19 pandemic, we must take extra care to strengthen ballot security protocols throughout the state. These enhanced security protocols will ensure greater transparency and will help stop attempts at illegal voting.”

Earlier today, Governor Abbott used his executive authority to unilaterally close down dozens of satellite voting locations across the state established to assist Texas voters during this pandemic. While Dallas County’s one designated drop-off site is safe, the requirement that early voting clerks must allow up to two poll watchers from every candidate to observe ballot delivery puts our older, most dedicated workers at more risk with this forced exposure.

“This has President Trump written all over it with the Governor changing the rules with 33 days until the most important election of our lifetime to make it harder to vote, Dallas County will do what we can to protect the right to vote as well as protect the voters and workers involved in that process,” said Dallas County Judge Clay Jenkins. “It is imperative that everyone today make a plan to vote. Decide where, when, and how you will cast your ballot.”

Voters in Dallas County wishing to return their mail-in ballot in person may bring the completed ballot along with their state approved identification to the Elections Department at 1520 ROUND TABLE DRIVE, DALLAS, TX 75247. For questions or to confirm the hours that ballots can be accepted each day, call (469) 627-VOTE (8683).

Voters can find their polling location at www.dallascountyvotes.org and other important voting notices

Counties in Texas will only be allowed to designate one location for mail ballots.

Sarah Labowitz, policy & advocacy director for the ACLU of Texas, had the following reaction:

“We are dismayed that the governor of Texas decided to curtail the ability of Texans to cast their ballots safely in the middle of a pandemic by limiting the number of drop-off sites per county. While the governor asserts that he is attempting to ‘strengthen ballot security,’ we see this as yet another thinly disguised attempt to stymie the vote. As is well documented, Texas has a voter suppression problem, not a ballot security problem. The governor should work with counties to ensure that all timely mailed ballots are received and counted, and that all voters appearing at polling places to submit ballots or vote are free from harassment.”