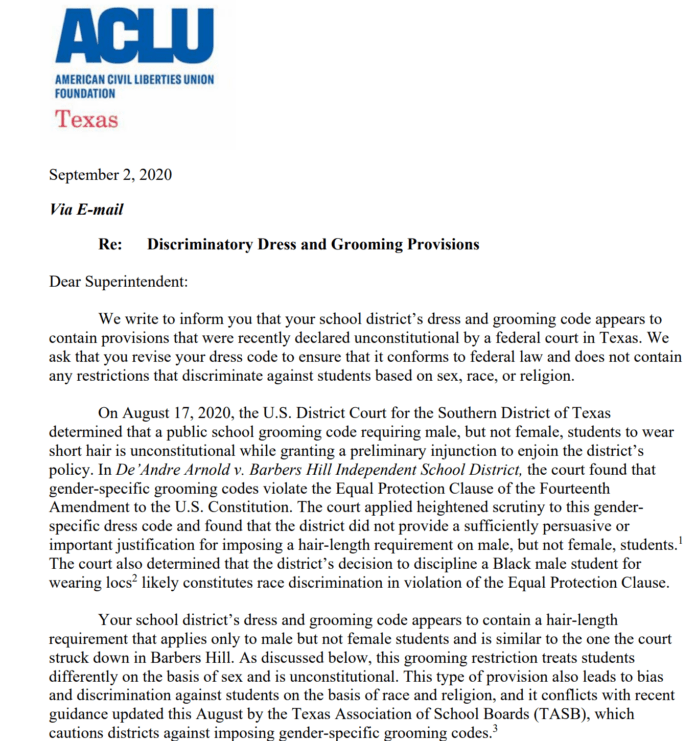 HOUSTON – The ACLU of Texas today sent a letter to hundreds of school districts throughout Texas demanding that they reexamine dress and grooming code policies that are unconstitutional and discriminatory.

“While school districts throughout the county have removed policies that were based on antiquated sex stereotypes, many school districts in Texas still have policies that treat students differently on the basis of their gender, such as requiring different hair and dress standards for male and female students,” said Brian Klosterboer, attorney for the ACLU of Texas. “Recent court decisions, including from the U.S. Supreme Court, have found that this type of gender-based discrimination is unconstitutional. School districts need to conform to federal law and fix outdated policies that cause serious harm to students in Texas.”

This July, the ACLU of Texas represented Kaden Bradford in a grievance challenge to an east Texas school district’s gender-specific grooming policy, which prevented Kaden and his cousin, De’Andre Arnold, from wearing locs. Two weeks ago, a Texas federal court struck down this policy, which required male, but not female, students to wear short hair, and found the school district’s practices to be unconstitutional discrimination based on race and sex.

In the letters sent to 477 school districts, the ACLU of Texas warns that such policies are outdated, harmful, and could leave them open to civil rights litigation. The ACLU of Texas is asking school districts to revise their dress and grooming policies to ensure that all students are treated fairly and equally, and that they do not face discrimination.

A copy of the letter is available here: https://www.aclutx.org/sites/default/files/aclu_of_texas_letter_on_dress_and_grooming_codes_.pdf

A list of school districts that have been identified as likely having discriminatory grooming provisions is available here: https://www.aclutx.org/en/list-school-districts-receiving-dress-code-letters-september-2020

In July, Midlothian ISD adopted a new, more inclusive dress code policy. The new dress code does not limit the length or style of hair by gender. It does not prohibit dreadlocks and also now allows students to dye their hair pink, purple, orange, etc.