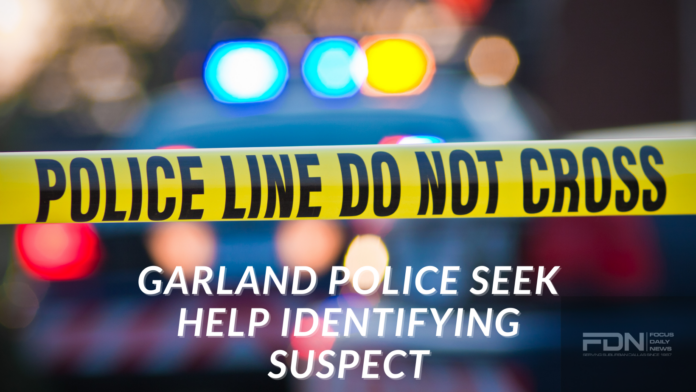 Garland Police held a press conference earlier today to discuss last night’s shooting at a convenience store which led to three deceased males and one wounded. Police stated they do have video from the store and shared a portion during the press conference. While they have made an arrest of a 14 year old male they believe to be the shooter, the investigation is still active and ongoing. The suspect has not yet been charged with the shooting, he was arrested on an outstanding warrant.

Garland Police are looking for a second suspect, and released a photo of him. The individual they are looking to identify and speak with is believed to be the driver of the pickup truck. They are also looking to locate a white Ram 1500 with damage on the passenger side. At least 20 rounds from  40-caliber pistol were fired by the suspect. The Chief of Police Jeff Bryan said they don’t know why the shooting occurred and it’s a difficult investigation because it involves kids.

“We want to know why. We don’t have an answer to why. We are trying to comprehend this,” Bryan said. “When it’s kids, when it’s 14 and 16-year-old kids committing acts, and victims of acts, it’s even harder for us to comprehend that.”

The individual that is recovering in the hospital was an employee of the convenience store, Police described him as a “cook”. It is unknown if the shooting was targeted, Police know two individuals entered the store together. At this time they aren’t sure if all four of the shooting victims knew each other.

On the evening of December 26, just after 7:30 pm, Garland Police responded to the report of a gunshot wound in a convenience store in the 700 block of West Walnut Street. When officers arrived, they observed four (4) males inside the store who had been shot. Three (3) of the males were pronounced deceased (two 16 year old’s and one 14 year old) at the scene and the fourth victim was transported to a local hospital in critical condition.

Detectives retrieved video surveillance showing all the victims inside the store. The video also showed a light skinned male exit a white Dodge 4-door pickup truck, open the front doors of the convenience store, and begin firing a gun striking the victims. The male suspect is then seen getting back in the white truck on the passenger side and the truck fleeing at a high rate of speed.

The male shooter is described as a light skinned male, wearing a baseball hat, blue surgical mask, and dark colored athletic shorts. He was not wearing a shirt.

The victims are all males and their identities are not being released at this time.

The investigation remains active and detectives are still trying to determine what led to the shooting. Anyone with information is encouraged to call the Garland Police Department at 972-485-4840. Callers may remain anonymous by calling Garland Crime Stoppers at 972-272-8477 (TIPS). A reward of up-to $5,000 is being offered for information that leads to the identity and arrest of the suspect.