Home Entertainment Ft. Worth Will Be New Home To PBR World Finals in 2022 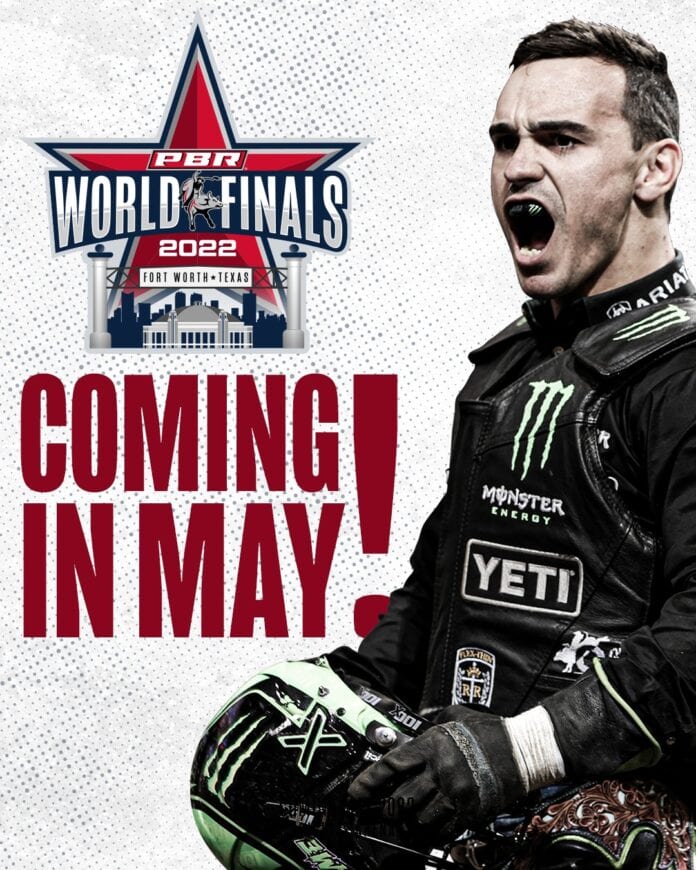 FORT WORTH, Tex. (August 31, 2021) – PBR (Professional Bull Riders) today announced that bull riding’s most prestigious event, the PBR World Finals, will move to Fort Worth, Texas, and Dickies Arena starting in 2022 as part of a comprehensive schedule restructure for its premier series. The new PBR Unleash The Beast regular season will span from January-May, culminating with a seven-day championship festival, spanning two weekends of bull riding and fan activities, in Fort Worth.

The changes will go into effect immediately after the 2021 PBR World Finals which will conclude the current season in Las Vegas, Nevada, at T-Mobile Arena Nov. 3-7.

“We were excited to host the 2020 PBR World Finals in Texas, and we are proud to now welcome the most intense bull riding competition with the most engaged fans back to the Lone Star State in the 2022 season,” said Governor Greg Abbott. “Fort Worth is the Modern West, and there is no better place for the PBR World Finals to call their new long-term home. I congratulate the PBR, the City of Fort Worth, and Mayor Mattie Parker on this world champion partnership that will showcase Texas as the premier sports-entertainment destination, spur continuing tourism and travel, and bring new jobs to Fort Worth and beyond.”

A Historic Win For Ft. Worth

“This has been an incredible team effort with PBR, Governor Abbott, our Fort Worth Sports Commission and so many others,” Mayor Mattie Parker said. “Fort Worth is the gold standard for public-private partnerships and we are marshaling all our resources to roll out the red carpet for the PBR World Finals.”

“This is a historic win for Fort Worth. Powered by Dickies Arena and a community committed to hospitality, we are excited to announce this latest, significant sports event for our city. Welcoming the PBR World Finals beginning in 2022 shows how Fort Worth is attracting the most exciting and important events in professional sports,” said Jason Sands, director of the Fort Worth Sports Commission, a division of Visit Fort Worth. This year the Sports Commission welcomed more than 40 events worth more than $100 million in economic impact.

PBR Finals Will Spend Two Weeks In Ft. Worth

“These landmark changes give the PBR season greater continuity and allow the league to hold our crown jewel, the World Finals, in the heart of cowboy country surrounded by exciting fan entertainment activities,” said Sean Gleason, PBR CEO and Commissioner. “PBR World Finals will now have a two-week presence throughout Fort Worth, making the Metroplex the must-visit, sports-entertainment destination, every May. We are ecstatic to work with our incredible partners in Fort Worth, as we usher in a new era adding to the rich history of our World Finals and continue to bring new programming to Fort Worth. We look forward to the many opportunities to grow the PBR World Finals and sport as a whole here in Texas.”

The inaugural PBR World Finals in Fort Worth will be held from May 13-22, 2022 at Dickies Arena, headlining an action-packed two weeks of activities across Fort Worth.

Harkening back to a past format of the World Finals, reminiscent of when the year-end event was split between Mandalay Bay and Thomas & Mack Center in Las Vegas, the first three rounds of the 2022 PBR World Finals will be held May 13-15, with the final five rounds held from May 19-22.

“Dickies Arena is proud to welcome the World Finals to Texas and celebrate 30 years of PBR in our new state-of-the-art facility. We are excited to host PBR in another national capacity and look forward to showcasing the city of Fort Worth to PBR fans from across North America,” said Matt Homan, president and general manager of Dickies Arena.

In addition to Dickies Arena, the league will also bring World Finals-related events and programming to Cowtown Coliseum, Fort Worth Convention Center and the Will Rogers Complex in Fort Worth, and the flagship PBR Bar at Texas Live!, boasting a 7,000 square-foot balcony overlooking Arlington Backyard, one of the region’s top concert venues, in nearby Arlington.

Las Vegas Will Continue To Host Other PBR Events

PBR has held its annual championship in Las Vegas since the sport was founded, with the exception of 2020 when the World Finals were held in Arlington, Texas due to the ongoing COVID-19 (coronavirus) pandemic. The PBR will continue to visit Las Vegas with significant events.

“We would like to thank the City of Las Vegas for being such an incredible host to the PBR World Finals for nearly three decades,” said Gleason. “While we are excited about the move to Texas, Las Vegas will continue to hold marquee PBR events, which will be announced in the coming months.”

The 2022 PBR season will now span January-May, with subsequent seasons starting in 2023 lasting from November-May.

The 2022 campaign will include a minimum of 20 elite Unleash The Beast events, stopping in stalwart venues in cities such as Madison Square Garden in New York City, STAPLES Center in Los Angeles, Chesapeake Energy Arena in Oklahoma City and MetraPark in Billings, Montana.

Ticketing information for the 2022 PBR World Finals in Fort Worth and regular season Unleash The Beast events, in addition to a complete season schedule, will be announced soon.

PBR will hold events in the months following the 2022 PBR World Finals in May until the next Unleash The Beast regular season begins in January 2023. The league will provide updates on those plans in the near future.

Tickets are still available for the 2021 PBR World Finals.

Marking the year-end event’s final time in Las Vegas at T-Mobile Arena, tickets for the five-day event range in price from $27 to $351. Fans can purchase tickets at the T-Mobile Arena Box Office, pbr.com, at AXS.com, or by phone through the PBR Customer Service Department at 800-732-1727.

PBR is the world’s premier bull riding organization. More than 500 bull riders compete in more than 200 events annually across the televised PBR Unleash The Beast tour (UTB), which features the top 35 bull riders in the world; the PBR Pendleton Whisky Velocity Tour (PWVT); the PBR Touring Pro Division (TPD); and the PBR’s international circuits in Australia, Brazil, Canada and Mexico. PBR’s digital assets include PBR RidePass on Pluto TV, which is home to Western sports. PBR is a subsidiary of IMG, a global leader in sports, fashion, events and media. For more information, visit PBR.com, or follow on Facebook at Facebook.com/PBR, Twitter at Twitter.com/PBR, and YouTube at YouTube.com/PBR.