Duncanville Is A National Powerhouse

After weeks of anticipating the opening of football season in the fall, it has now arrived for the Duncanville Panthers. With one game under their belts, due to the late start of the season because of the COVID-19 pandemic, the Panthers will take on the nation’s top-ranked high school football team in several polls, including USA Today and MaxPreps.

The Panthers (1-0) will face IMG Academy (4-0) from Bradenton, Florida, Saturday, Oct. 10 at Globe Life Park, the new home of the Texas Rangers baseball team. Kickoff is set for noon.

The Panthers are a national power themselves. They are ranked No. 2 by USA Today and No. 6 by MaxPreps.

This appears to be the first meeting between the two teams. The last time IMG came through the area was in 2015, when they defeated DeSoto 47-29.

Both teams are known for explosive offenses and stingy defenses. The Panthers flexed their strength in their season opener, defeating Dallas South Oak Cliff 41-3. The Ascenders are averaging almost 50 points per game (48.5) and surrendering just 10.5.

The Panthers are coming off back-to-back runner-up finishes in Class 6A Division I of Texas’ University Interscholastic League, losing both times to Houston North Shore. In going 15-1 last season – the most wins ever in a season for the Panthers – Duncanville fell 31-17 in the title game. In 2018 the Panthers finished 14-1, losing 41-36 on a Hail Mary pass on the final play of the game in the state final. 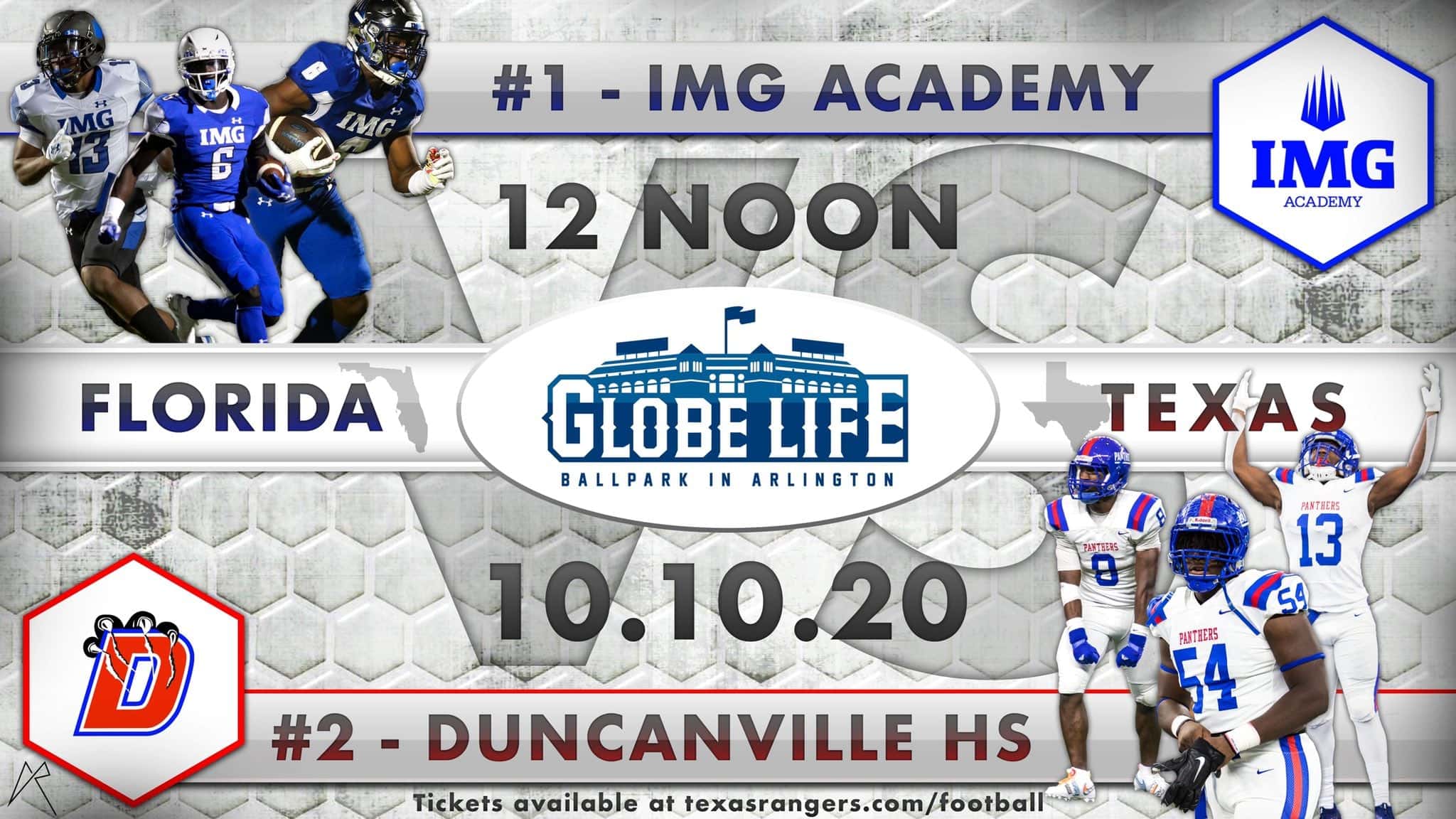 Coach Samples Leads The Panthers With A Record Of Success

The 2018 state finals appearance was the Panthers’ first since winning state in 1998.
Reginald Samples took over as head coach of the Panthers in 2015. After going 3-7 in his initial campaign, the Panthers are 52-6 since, including this year’s season opener. They are 14-4 in the postseason in that span, advancing to two state finals, a quarterfinals, and the second round.

Duncanville has also won 33 consecutive regular-season games dating to the latter part of the 2016 season.

Samples was named the USA Today National High School Coach of the Year in 2019.

“We are very excited about starting the season against a very talented and highly ranked team such as IMG Academy,” Samples said. “This game will require us to play at a very high level and give us the opportunity to evaluate where we are as a team at this time.”

The Ascenders have posted a 63-5 record since the 2013 season – which is also the last time they lost more than one game in a season, finishing 8-2. They play an independent schedule, traveling all over their own state and the nation to face opponents.

Tickets are still available, as a reminder Globe Life Park has a NO BAG POLICY. However, any bags carried for medical reasons, as well as manufactured diaper bags that accompany infants and young children, are permitted.

Look for photos from Saturday’s game in next week’s Focus Daily News.