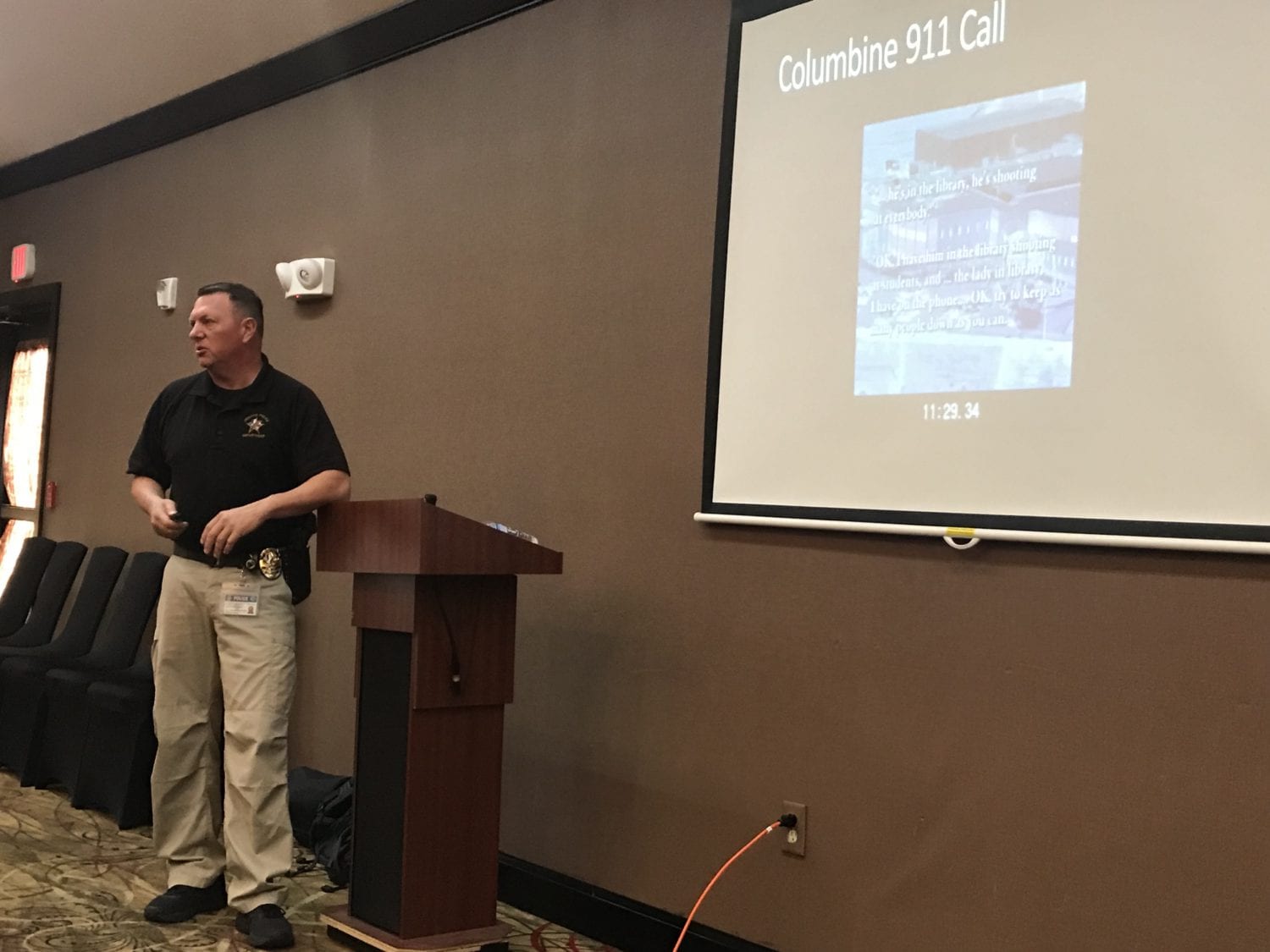 DESOTO—Every generation in America has their own memories of bloody mass shootings. In 1921, as many as 300 people were killed during a Memorial Day Riot in Tulsa, Oklahoma. In 1966, Charles Whitman sought notoriety as he killed 16 and wounded 31 atop the University of Texas at Austin clock tower.

Most recently a church shooting in Sutherland Springs, Texas, left 30 dead in its wake. It continues to make headlines and has sparked a national discussion on what to do during an active shooter event.

This week the DeSoto Chamber of Commerce hosted a seminar on Active Shooter Response, led by Sergeant R. Heath Penwarden. The seminar was a part of the Chamber’s “Lunch and Learn” Series held at the Town Suites Marriott.

During the afternoon session Penwarden gave an emotional and thought provoking clinic on how victims of a mass shooting event can increase their probability of survival during the police response time.

The period of minutes between the beginning of an shooting incident and the time police reach the scene are critical, says Penwarden.

While the acts brave individuals who charge terrorists on planes or those who chase down mass shooters can be inspiring. Penwarden says that they are also dangerous. Your chief job in these dire situations is to stay alive.

“The goal is to better protect yourself,” he said. “You are not helpless. You have a say over your life.”

During an active shooter incident the normal response time nationwide is 3 minutes. In that amount of time a lot can happen. Attendees of Tuesday’s class learned the A.D.D. method. AVOID. DENY and DEFEND.

Avoid: Beaware of situations and surroundings at all times. Know your exits and act fast. Now isn’t the time to capture video or live update to social media sites. Leave the premises if possible.

Deny: Lock doors. Turn off lights. Stay out of sight of the shooter.

Defend: If you can’t run and you can’t hide then you have to band together and attempt and overpower the assailant-using anything around you as a weapon. “Hoping and Hiding doesn’t always work.”

Sgt. Penwarden has held numerous positions within the Police Department from Detective, School Resource Officer, Patrol Sergeant and Bike Officer. Currently Sgt. Penwarden is assigned to Internal Affairs and Training. He is also the Team Commander for the Southern Regional Response Group- Special Response Team (SRRG-SRT), which is a multi-agency SWAT team.

Lunch & Learns take place monthly and dates are subject to change. Sponsors present on an array of topics that can pertain to Social Media, Financial Wellness, Active Shooter Response, etc. Sponsors sometimes bring in lunch, however you can bring your own lunch. Locals, members, and other business owners, etc. are invited to attend. There is a non-member fee of $7 per person to attend.

For more information about the next Active Shooter Clinic contact the DeSoto Chamber of Commerce at 972.224.3565 or desotochamber.org.