After conducting a thorough national search to find a permanent Parks & Recreation Managing Director, the City of DeSoto concluded that Chris Glover, who has been serving as interim director, is to be their permanent choice.

Glover, a 20-year veteran of DeSoto’s Parks System, has served twice in the interim role during his career in DeSoto. Mr. Glover has been serving as Interim Parks & Rec Director since May of 2020 when previous Director M. Reneé Johnson left DeSoto to become an Assistant Director for the Dallas Parks Department.

“I am honored to be named to the post of Managing Director of DeSoto Parks & Recreation and would like to thank the City Manager, Mayor, and City Council for the confidence that they have shown in me,” said Chris Glover. “I have been proud to be a part of this great community and look forward to continuing to provide DeSoto’s residents with the very best recreational opportunities possible.”

Glover’s hiring was praised by DeSoto City Manager Brandon Wright who observed, “I have seen Chris take on some daunting challenges and each time he has thoroughly impressed me with his leadership, his innovative solutions, and the poise that he has shown while handling some very tough assignments. Chris was truly the best person for the job!”

DeSoto Mayor Curtistene S. McCowan echoed Wright’s sentiments adding, “Those of us who have known Chris over the years have always been impressed by his positive attitude, strong work ethic, and dedication to the well-being of the people of DeSoto. His selection to lead DeSoto’s parks system into the future is excellent news for our great city!”

Chris Glover joined DeSoto Parks & Recreation in January of 2000 as a Recreation Manager but quickly took on responsibilities far beyond the scope of that position. Chris exercised oversight for several major construction projects including the Grimes Baseball Complex, Moseley Aquatics Park, Meadow Creek Football Complex, Zeiger Softball Complex, and DeSoto’s Recreation and Senior centers. Under his leadership, the Parks & Recreation Department significantly contributed to the economic development of DeSoto through hosting youth tournaments which generated an estimated five million dollars annually to the city’s economy. Chris was also instrumental in assisting the department’s efforts to secure a coveted CAPRA accreditation through the National Recreation and Parks Society. DeSoto Parks & Recreation is one of only 171 parks and recreation agencies in the United States to possess this designation.

Chris received his Bachelor of Arts Degree for the University of North Texas and is a resident of DeSoto. 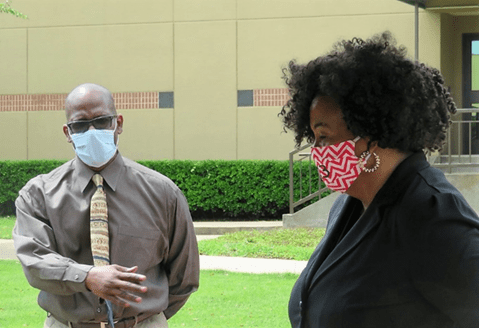