DESOTO – It is a strong show of support when cities take the time to pay homage to our nation’s veterans. The City of DeSoto will be holding a Veteran’s Day event as in year’s past, but this year with a special element. On November 11, DeSoto will celebrate the dedication of a Veteran’s Memorial.

“It is altogether fitting that the City of DeSoto chose Nance Farm as the site to erect and dedicate a Veterans Memorial,” said DeSoto Mayor Curtistene McCowan. “I truly believe the DeSoto Veterans Memorial at historic Nance Farm will be an iconic civic landmark in our City and will stand as a place of hope and inspiration for local residents and visitors to come together as one.”

McCowan said too, first and foremost the Veterans Memorial is a symbol of the appreciation, love and shared pride that DeSoto has in its veterans.

Moving into its fifth year, the City’s Vet Fest got started when former Mayor, Carl Sherman, met with US Congresswoman Eddie Bernice Johnson regarding veteran’s issues.

“Mayor Sherman came up with the idea to host Vet Fest as a way to appreciate our veterans and also to connect them with services in the community that they may not be aware exited,” said DeSoto’s Community Relations and Public Information Manager Kathy Jones.

The Veteran’s Memorial to be unveiled at next month’s event was actually erected in July 2016 at Nance Farm. Since that time, they have installed fencing, sidewalks and landscaping. While the memorial has been available for viewing, it was never formally unveiled to the public.

The monument was a project the DeSoto Historical Foundation spearheaded. Lora Stallings, Staff Liaison to the DeSoto Historical Foundation, explained it was in 2016 the granite obelisk was placed on the southeast corner of the Nance Farm property. It is decorated with USA, POW, Texas and DeSoto flags. The obelisk is seven-feet tall and made of Georgia granite. Each of the four sides of the monument bears commemorative words of appreciation for military service.

The Saturday, November 11 event will include transportation for attendees on buses from DeSoto Town Center to Nance Farm. Festivities include vendor booths and there will be many local officials taking part including McCowan, former DeSoto Mayor Bobby Waddle, COL RET USAF, Sherman and Congresswoman Johnson.

Planning for about 150 to attend, there will also be booths for veterans who want to learn more about local job opportunities. These booths will include the University of Texas at Dallas military and veteran center, the JK team (a team of realtors that specialize in helping veterans use their benefits to help purchase homes), Al Boenker (owner of the largest NS insurance carrier in the nation), Boots to Heels to helps address some of the issues female veterans face with the transition to civilian life, Npower and four tables confirmed from the Dallas VA providing blood pressure checks, flu shots, cholesterol checks and help with VA benefits.

Veterans and their families and the general public are invited to take part in the Nance Farm event from 9 a.m. to noon. The special ceremony to unveil the memorial will take place at 9 a.m. Nance Farm will also be open to the public for tours of the home and viewing of the DeSoto Firsts Exhibit of historical photos and documents that commemorate “first” events in the City. There is also a Military Veterans Exhibit made up of memorabilia on loan from area veterans and past appreciation events, and an excerpt from the Pathway to Freedom Exhibit including educational items regarding the Civil Rights Era, the Underground Railroad and Juneteenth.

“The transformation of Nance Farm into a historical museum will demonstrate DeSoto’s commitment to capturing the city’s rich history from its humble beginnings to the present, thus providing both educational and cultural experiences for all ages,” McCowan concluded. 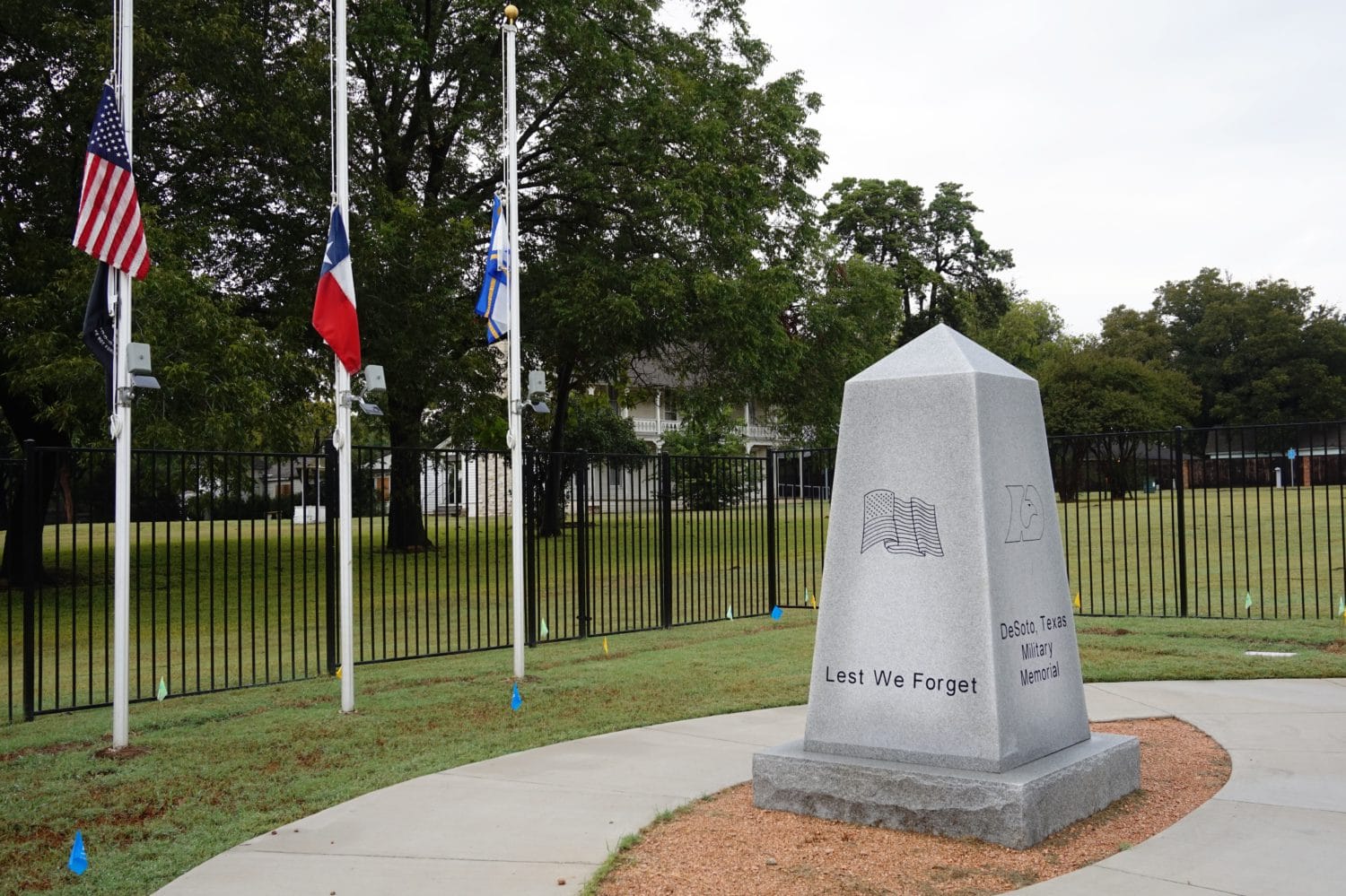