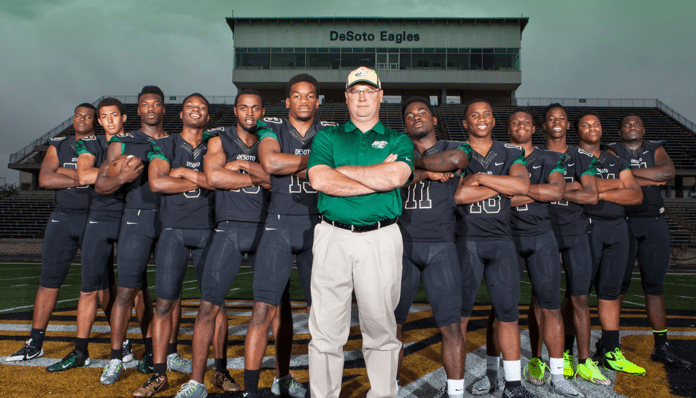 DESOTO—Eagle Football has always been a powerhouse with results in reaching the playoffs, top collegiate signees and development of boys into men. Is this the year?

After topping Dave Campbell’s local list of seniors going D1 and ranking preseason #8, the Eagles are on everyone’s radar again. Head Coach Todd Peterman feels good in his second year at the helm.

Here’s how the DeSoto Eagles are shaping up for 2016.

DeSoto has added TCU pledge Shawn Robinson, a transfer from Denton Guyer. Robinson is a four-star recruit and the top-rated quarterback in the area. Four-star recruit K.D. Nixon is ranked the 37th-best wide receiver in the nation by 247Sports.com. He missed four games last year with a hamstring injury but was still DeSoto’s second-leading receiver.

Head coach Todd Peterman and his staff do an excellent job of posturing their athletes for success both in the classroom and on the field.

“One of the reasons that we have a lot of kids offered scholarships is they all have excellent grades and already have their SAT scores,” Peterman said. “So we start when these kids are freshmen and hammer them with grades, parent calls and all the things needed to be successful. Working behind the scenes with them as SAT and ACT tutors goes a long way toward getting these early offers.”

“You’re not going to get early offers if you don’t have good grades. That’s why we have so many success stories in life besides just being great athletes,” Coach Peterman said in regards to why DeSoto has so many FBS commits.