Tony Irvin, Assistant Director – City Engineer, was introduced by City Manager Brandon Wright, to review the city’s (CIP) Capital Improvement Plan. The CIP is a planning tool including a five year plan which prioritize projects and is updated annually. Projects are typically based on council feedback, citizen feedback, the Master Plan and staff knowledge of infrastructure issues. The implementation of the plan will typically continue over many years and will be funded by such sources as bonds, the general fund, storm drain fees, the water and sewer fund and grants from the CDBG, the county, TxDOT and NCTCOG.

2019 Alley Reconstruction Project – This consists of two alley segments along Misty Glenn Drive/Dennis Drive and Ray Andrea Drive/Vince Lane. It is estimated to cost $160 per foot and design is 80% complete. The cost is expected to be financed through bond sales and Irvin hopes construction can be completed by this fall.

2019 Street Reconstruction Project – This is comprised of various street segments with bidding to commence late this month and construction to start later this summer. The 6000 feet to be reconstructed will be along Parkerville Road, Marble Canyon Drive, Peggs Street and Silver Creek Drive.

2020 Renovation and Replacement Project – Phase 1 of this was awarded this May for $1.2 million. It consists of 7,600 feet of water and sewer line replacement. It will begin over the next month, continuing through the remainder of the year.

Chattey Road Reconstruction – This is being done from Belt Line to Pleasant Run. Its cost is $6.5 million and will be done in three phases. It will take one year to complete.

Danieldale Road Widening – This is being done in conjunction with Dallas County. Design on this project is underway and 20% complete. It begins at the west city limits and continues to Westmoreland Road. 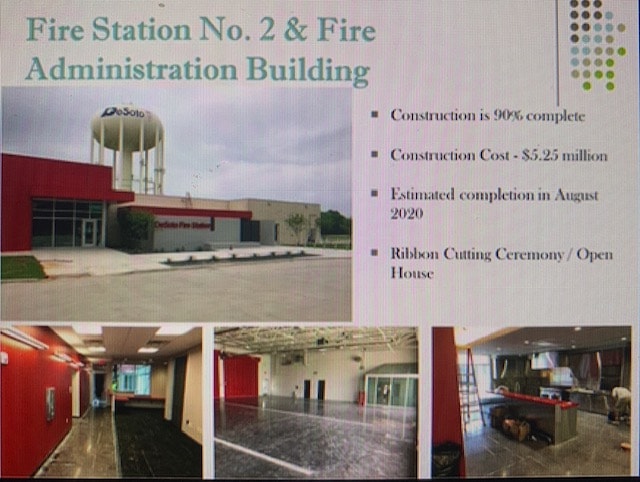 Fire Station No 2 and Fire Administration Building – Construction is 90% complete with a cost of $5,250,000. It should be complete by sometime this August.

Pleasant Run Widening from Cockrell Hill to Westmoreland – this is a more complicated project because it will involve purchasing land from 12 different property owners to continue. It will be for a proposed four-lane divided concrete roadway with underground storm drainage, sidewalks, lighting and landscaping. The design is 95% complete. Best case, this could be a nine-month project, but more likely 12-18 months based on real estate acquisition and utility work, then in totality it would be in the area of 36 months for completion.

Westmoreland Road Widening – this is another proposed four-lane divided concrete roadway project with design also 95% complete. The target time to begin construction is the summer to fall of 2021. A good thing about this project is that much of the right of way already exists with only one property still needing to be acquired. 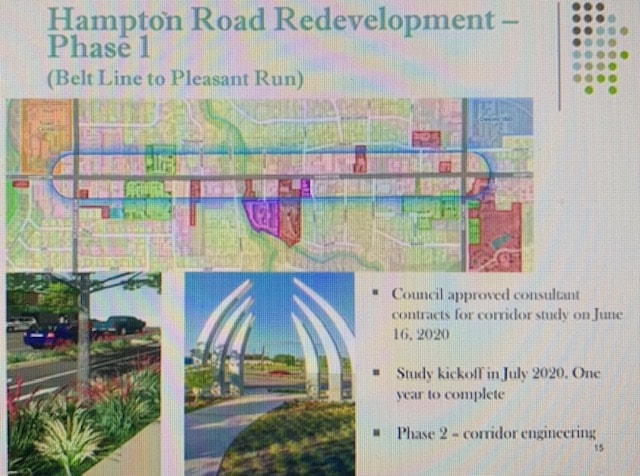 Hampton Road Redevelopment, Phase 1, Belt Line to Pleasant Run – The council approved contracts for study at the last meeting (June 16) and the study is scheduled to kickoff in July. The second phase will be the actual engineering.

Parkerville Road from Polk to Hampton – This was approved in a 2013 bond election with design projected to start in 2023. It was delayed in order to expedite the Hampton Road project. It is also proposed to be a four-lane divided roadway.

Wintergreen Road Realignment Phase 1 – This is a joint project with Dallas county, Cedar Hill, Duncanville and Dallas Water Utilities. It would involve removing the dangerous dog-leg curve over a bridge between Thorntree Country Club and Cockrell Hill Road. Although Dallas County is managing the project, DeSoto is monitoring the progress. 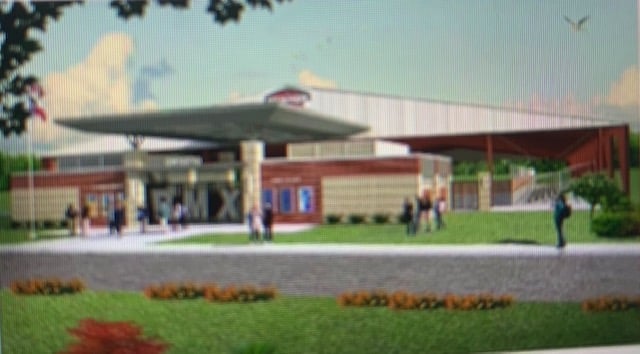 Chris Glover then spoke about the Grimes Park BMX Restroom and Concession Stands project. He said Phase II plans and documents were complete and construction should begin this fall with completion around February of 2021.

Crystal Owens then discussed facility improvements that have been made and others that are being proposed. She said that everything in green on her chart is complete, everything in purple is planned but brakes have been put on until what is being affected by Covid-19 is seen, and what is in black is working. The Library restrooms have been bid but no final selection has been made. Fire Administration renovations cannot be done until the station is complete. “The Senior Center water heater will also be taken care of later this year,” Ms. Owens said.

Council discussed whether to keep the building the Chamber now occupies (304 N Hampton Road) or to sell it or dispose of it by some other means. The building cost the city $400,000 but it would now be faced with $1,200,000 in renovations to bring it up to ADA codes. Mayor McCowan said “It really is a nice looking building, but there is a lot of work that needs to be done. There needs to be an elevator…”

“There are a lot of issues with the building,” Ms. Owens responded. “There are split levels when you walk in the door … All the restrooms would have to be completely renovated … there is an entire ‘laundry list’ of items that would have to be addressed to get this building up to compliance.”

“It’s very unlikely that this building will be in conformance with our vision for Hampton Road,” CM Wright added. “It is probably better as a teardown.” He added that he would have a talk with the Chamber. “We want to be a good partner with the Chamber.”

Councilwoman Raphiel said she believes the city should move on the subject as soon as possible because “I would hate for something to happen … either they move, we tear it down or something, but it should not be occupied if it’s not in compliance.” 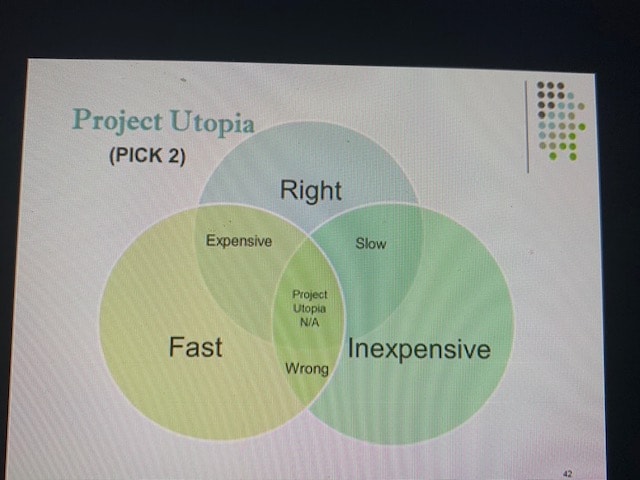 Fire Chief Jerry Duffield addressed Council on the need for a new system to encrypt radio signals which would communicate with other Best Southwest area cities as well as those throughout Texas and the entire country. He said this would be essential within the next two years. The system would be used by all first responders, who could then respond to emergencies much more efficiently.

Ms. Owens then discussed when bonds would actually need to be sold to satisfy the capital improvement needs. She said the schedule is preliminary and will need to be discussed with the city’s bond consul to come to any final recommendation. Mayor Pro-Tem Moore confirmed with Ms. Owens that $16.5 million would be what it would take to satisfy the needs for 2021. CM Wright added “As far as we know right now, this should not affect our tax rate. We will continue to analyze that.”

Mayor McCowan concluded with “This has been very informative – Very, very helpful. With Covid, it makes everything much more difficult.” She then adjourned the meeting.

Help us continue to bring you local news without a paywall and support independent journalism by subscribing to our e-edition. Currently we are offering a 1 year subscription for only $10.