Should Criminal History Be Included On Employment Applications?

DESOTO – The DeSoto City Council held a special meeting this week determining next steps for the city to consider when adopting an ordinance eliminating a question about criminal history on job applications.

After the presentation, the consensus seemed to be that more consideration was needed before mandating such an ordinance.

DeSoto Mayor Rachel Proctor and Mayor Pro Tem Nicole Raphiel had legitimate concerns about the fast-track timeframe of the ordinance since the town hall meeting was poorly attended.

Raphiel said she could understand mandating this type of policy for staff, but she said she is struggling with the mandate for the community at large, particularly for smaller businesses.

There was also the consideration of the punitive part of such an ordinance with a lot of process on the staff side to implement.

Mayor Proctor voiced her trepidation with moving forward now saying, “I would be very much be okay starting at the city level as a mandate for City Hall and then looking further and getting some intel from the community and actually working to be more intentional about truly hearing from our businesses before we make this a mandate for our businesses.”

She added she had a little bit of angst about moving forward too because the meetings do not give a true picture of what DeSoto businesses feel about an ordinance like this. 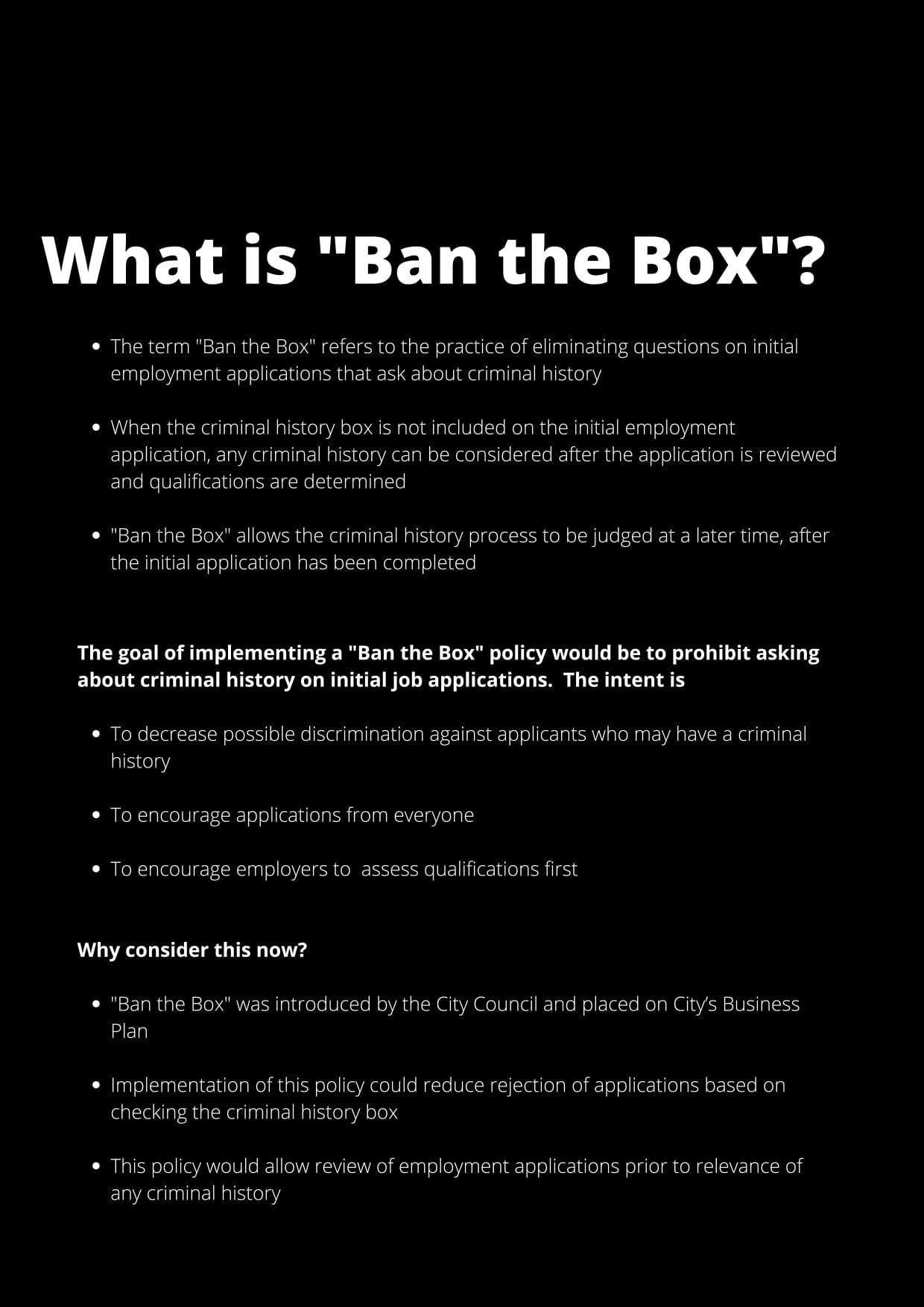 The Ban the Box conversation was presented at a DeSoto Town Hall on March 11 and refers to fair choice hiring practices. It does not ignore the criminal history process or disallow the exploration of any criminal history after the initial application. The true purpose is to decrease possible discrimination against applicants who may have criminal history, encourage applications from everyone and to encourage employers to assess qualifications first.

Who Has Banned The Box?

In the city’s presentation they discussed who has banned the box, that includes 36 states, the City of Austin (public & private businesses), City of San Antonio (public), Dallas County (public), City of Houston (public) as well as major corporations like Starbucks, Facebook, Walmart, etc.

There were also comments on a response from the DeSoto ISD with its concerns. The ISD requested the city ordinance be the same as the City of Austin and the political subdivisions be excluded. Otherwise, the ISD felt they could not comply with the ordinance because of their state requirements.

Councilmember Andre Byrd asked a question about churches and wondered about an exemption regarding persons hired to watch children during worship.

Other questions that arose were how to get the word out to residents and businesses.

Staff recommended following the City of Austin’s lead with the exception being the political subdivisions and anyone else with a federal or state requirement that would conflict with the ordinance.

“That should take care of those who need to be excluded,” DeSoto City Manager Brandon Wright said.

The soonest staff felt this ordinance could go into effect would be 60 days for the City of DeSoto and a possible October 1 date to consider for businesses in the city.

No action was taken, and the consensus was more time and reaching out for more intel before making a final decision adopting the ordinance.

And, in terms of mandating, a reminder that all the voices of the businesses in the city should be heard just like the resident’s voices as well.