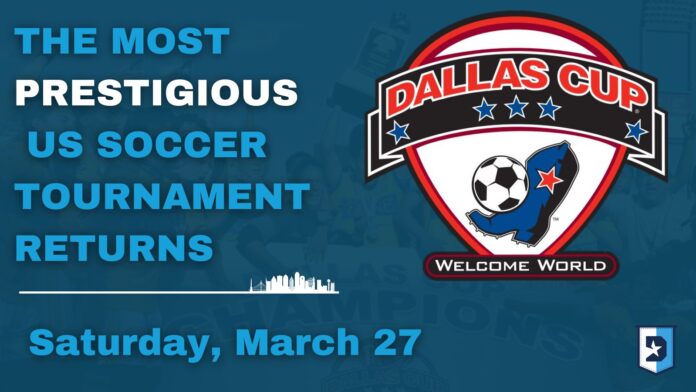 DALLAS, Texas (Thursday, March 18) – Dallas Cup, the oldest and most prestigious youth soccer tournament in the United States, is set for an exciting return to the pitch later this month. Following the cancellation of the tournament for the first time in its four-decade history in 2020, Dallas Cup XLII will once again be played from Saturday, March 27 through Sunday, April 4 this spring.

The Boys component of the Dallas Cup will kick off March 28 and run through April 4. More than 230 boys teams from around the nation will vie for the prestigious “Boot and Ball” championship trophies in the U12-U19 age groups.

In addition to the boys tournament, the 2021 Dallas Cup marks the long-awaited return of girls divisions, with the inaugural Dallas Cup Girls Invitational presented by Mary Kay kicking off this year. Dallas Cup is thrilled to have Mark Kay as the Pioneer Partner for this exciting endeavor as it welcomes elite girls teams in the U16-U19 age brackets. Running concurrently with the boys tournament, the Dallas Cup Girls Invitational will be played March 27 through April 1.

While the action on the pitch will showcase soccer’s future stars, safety both on and off the field will be paramount. With health and safety protocols in place employing guidance from various health authorities and youth soccer governing bodies, Dallas Cup is devoted to not only being the best youth soccer tournament in the nation, but also to hosting the safest possible event.

Stay up to date with more news by visiting www.dallascup.com and following us on Twitter @dallascup.

About Dallas Cup: The Dallas Cup is the oldest and most prestigious international youth soccer tournament in the United States. Consisting of age groups from U12 to U19 in the Boys category and U16 to U19 in the Girls category, Dallas Cup averages more than 100,000 spectators during tournament week. Since its inception in 1980, Dallas Cup has hosted teams and referees from 47 states, six continents and more than 100 countries. Follow Dallas Cup on Twitter, Facebook and on Instagram.