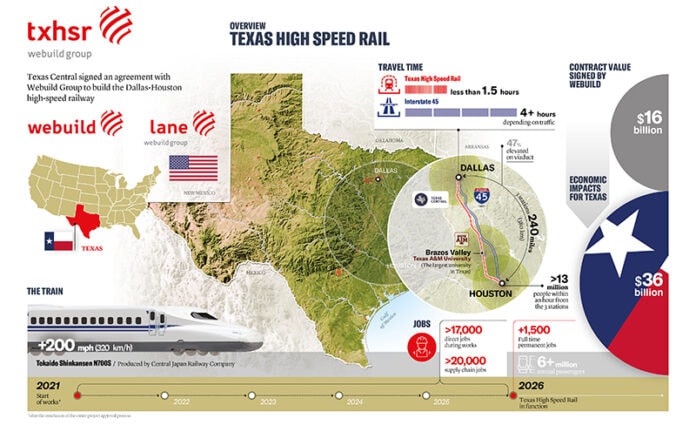 CHESHIRE, CT – The Lane Construction Corporation and its parent company and joint-venture partner Webuild Group have signed a final agreement worth $16 billion with Texas Central that marks the latest milestone ahead of the start of construction of a high-speed railway between Dallas and Houston. The ambitious project promises fast, safe, and environmentally friendly travel as well as thousands of jobs and a major boost to the economy. It is one of the single biggest infrastructure investments of its kind in the United States by value and will be the first true high-speed rail service in the country, having it join the ranks of countries that have high-speed rail service, including Japan, China, France, and Italy.

This agreement consolidates the results of the planning and advanced design stages of the project, as well as actualizing its value.

“We are excited to be part of this historical project that will bring high-speed rail to the United States,” said Mark Schiller, President and CEO of The Lane Construction Corporation. “It’s a true milestone for our country’s sustainable transportation infrastructure, and we are enthusiastic to bring 130 years of experience and expertise to the table as the contractor of choice to build it.”

“We are truly honored to have been chosen by Texas Central, that relies on our worldwide expertise to bring sustainable mobility to the country with the first true ‘end-to-end’ high-speed railway,” said Pietro Salini, CEO of the Webuild Group. “Being part of such a challenging project as leader of the design and construction of the railway is a unique experience that we are extremely proud of. This is a wonderful opportunity to further focus our presence in the U.S., our biggest single market, together with Lane, the company building first class transport infrastructure for the country for the past 130 years”.

According to the final contract, Lane and Webuild will execute all the heavy construction for the project, designing and building all 236 miles of the alignment, the entire track system, nearly half of it on viaduct, and the buildings and services for maintenance and other equipment, including industrial buildings, train depots, and facilities. Much of the alignment is elevated and will benefit from Lane’s expertise in constructing bridges and viaducts to reduce impacts as much as possible on landowners and residents of the counties the project will traverse.

The Dallas-Houston high-speed railway will transform mobility between the two cities. Based on Central Japan Railway’s Tokaido Shinkansen system, it will carry travelers at speeds of up to 200 miles per hour, bringing them to either destination in less than 90 minutes, with a single stop at Brazos Valley near Texas A&M University. Departures will be every 30 minutes during peak hours and every hour during off-peak hours. This technology will reliably transport more than 400,000 passengers every day and help reduce greenhouse gas emissions by an estimated 101,000 tons per year – emissions that would otherwise be produced by car and air travel between the two cities. By 2050, approximately 13 million people are forecast to use the train.

The train offers a safer alternative to today’s commuter options. Millions of passengers safely and securely ride high-speed trains every day across Europe and Asia. They have proved to be the safest and most reliable mass transportation option in the world today. Japan’s Shinkansen High-Speed Train System has a 50+ year history in Japan of no crashes, fatalities, or injuries due to train accidents. In 2016 alone, there were 3,773 fatalities on Texas roads, many of which occurred on the stretch of I-45 between North Texas and Houston, which consistently ranks as one of the most dangerous in the United States.

Creates 17,000 Jobs During 6 years of Construction

The project is expected to provide the economic impact of 84 Super Bowls totaling about $36 billion over the next 25 years and create 17,000 direct jobs during the six years of construction and more than 1,500 permanent jobs when the train service becomes fully operational. An estimated $7.3 billion worth of materials from U.S. suppliers across 37 states are planned to be used.

Lane and Webuild bring to the project over a century of experience in building large, complex civil engineering projects throughout the world. Its track record stands at more than 8,500 miles of rail and metro lines, which includes in the United States the Central Subway tunnel in San Francisco, California and the LYNX Blue Line Extension in Charlotte, North Carolina.

The Lane Construction Corporation is one of America’s leading construction companies, specializing in large, complex civil infrastructure. For over 130 years, it has contributed to the development of the country’s transportation systems including the Interstate Highway and a vast network of roads, bridges, airports, metros, and railways. Lane specializes in mobility, tunneling, and water resources to address sustainable development and climate change adaptation challenges. It is also a pioneer in project delivery methods and the use of design-build and public-private partnerships. Lane projects include the C-43 West Basin Storage Reservoir in Florida, an Everglades restoration effort; I-10 Corridor Express Lanes in California; the LYNX Blue Line Extension in North Carolina; the Anacostia River Tunnel in Washington, D.C.; the I-395 Express Lanes Extension in Virginia; and the Unionport Bridge Replacement in Bronx, New York. Based in Cheshire, Connecticut, it is wholly owned by Webuild, a global infrastructure group. For more information, visit www.laneconstruct.com. For more details about the parent company, visit webuildgroup.com.

Webuild, the new group born in 2020 from Salini Impregilo, is a leading global player in the construction of large, complex projects for sustainable mobility, clean hydro energy, clean water, green buildings, supporting clients in achieving sustainable development goals (SDGs). The Group is the expression of 115 years of engineering experience applied in 50 countries on five continents with 70,000 direct and indirect employees from more than 100 nationalities. Recognized for five years by Engineering News-Record (ENR) as the world leader in water infrastructure (such as dams, hydraulic tunnels, water and wastewater management, and water treatment and desalination plants), it ranks since 2018 among the top 10 in the environment sector and it is also leader in sustainable mobility (especially metro and rail lines, in addition to roads and bridges).

A signatory of the United Nations Global Compact, the Group’s expertise is displayed in projects such as the M4 metro line in Milan, Grand Paris Express, Cityringen in Copenhagen, Sydney Metro Northwest, Red Line North Underground in Doha, Line 3 of the Riyadh Metro and the high-speed railways in Italy. Other projects include the new Genoa Bridge and the Gerald Desmond replacement bridge in Long Beach, California, the expansion of the Panama Canal, the Snowy 2.0 hydroelectric power station in Australia, the Rogun hydroelectric dam in Tajikistan, the Anacostia River and Northeast Boundary tunnels in Washington, D.C. and the Al Bayt 2022 World Cup stadium in Qatar. In 2020, the Group’s total order backlog reached €41.7 billion, with 89% of the backlog of construction orders involving projects that support the SDGs set by the United Nations. Webuild, subject to direction and coordination by Salini Construttori SpA, is headquartered in Italy and is listed on the Milan Stock Exchange (Borsa Italiana: WBD; Reuters: WBD.MI; Bloomberg: WBD:IM).