A Crossroads Community That Lost Almost Half Its Population In 1856

There’s not much left at Crawford’s Tornado Graveyard in Cedar Hill these days, but that doesn’t mean there isn’t a lot to see.

In fact, it might best be envisioned by closing one’s eyes and imagining what was once a small but busy community. Then, in a single event, most of it was wiped out, including almost half of the few people who called it home.

“At that time it was definitely just a crossroads community. About 20 people were living,” said Geri Klauck, historian and treasurer of the Cedar Hill Historical Society, doing business as the Cedar Hill Museum. “About nine people were killed in the tornado, six from one family.”

That would be the William C. Hart family.

The small community featured a general store, livery stable, blacksmith, and a few other things that made it home. But, as history has shown, tornadoes don’t respect homes.
Information on the City of Cedar Hill websites tells that on Tuesday, April 29, 1856, the violent tornado hit. It took lives, killed livestock, damaged much property and reportedly left only two structures standing. However, with a resolute pioneer spirit, survivors went about the daunting task of restoring order to their shattered community.

Among the survivors was Robert Crawford. He was a teacher and pastor of Cedar Mountain Church, believed to be the first congregation in the area. Crawford owned land adjacent to the church site which was destroyed by the tornado. He donated four acres to church trustees to be designated as a free and indiscriminate public graveyard.

As the land was deeded a free and public graveyard in 1856, it is possible that others were buried there. However, no evidence or record of burials after the tornado are known to exist.

The cemetery is located in the vicinity of North Cedar Hill Road and Pioneer Trail. For its specific location, see Deed Records of Dallas County. However, as previously mentioned, there isn’t much to see there currently, though Klauck said that might change.

“I suspect what was there 165 years ago were crosses that have long since disappeared,” Klauck said. “The history is what is important.”

Klauck said the only historical records have come from stories in newspapers that were passed down. She added that ground penetrating radar did prove that people were buried there.

“I love random history, so I did more research and made the short trek from Pioneer Street to the graveyard during the winter, before the annual volunteer cleanup, and it was very difficult to find. The volunteers provide an invaluable service each year as they do their best to clear the overgrowth and maintain the historical site so that people can find it,” said Ashley Kevin Derrick, who moved to the area in 1994 and only discovered the graveyard in 2018.

“This piece of history is significant because it represents Dallas County’s first integrated graveyard (one of the graves is believed to be that of a black resident at the time), and it was dedicated before the Civil War. It’s a sobering experience to stand near the graves and imagine how, in the midst of devastation, a local pastor declared that the land be used for the indiscriminate burial of the victims of the tornado.”

Derrick added that she believes more volunteers are needed to help with the annual cleanup.

“Very few people know about the graveyard, even fewer have visited it, and the number of annual cleanup volunteers is shockingly low,” she said. “We need our community to take up the cause of maintaining this vital piece of history so that the legacy of inclusion our city had in the 1850s will not be lost forever.”

In fact, the graveyard, which is only 40 feet wide and 40 feet long, is now located on private property. The city may be looking at some trails in the future that could take some folks by the site.

“You would get fairly close by. Right now there’s nothing to see,” she said, adding that the Cedar Hill Historical Society has talked about putting some markers for the nine people believed to be buried there.

But while the site itself doesn’t have much to see, Klauck said the City of Cedar Hill itself is evidence of the resilience of the people who survived. 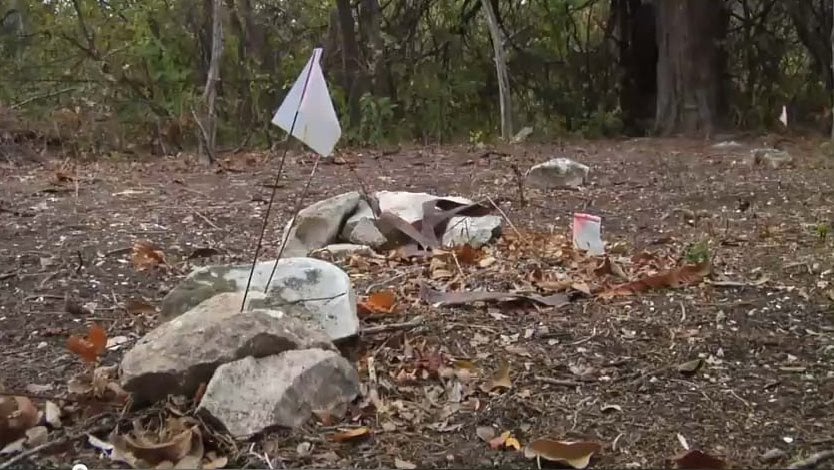 “I think it shows the stamina and perseverance of settlers in the area,” she said. “This was a major catastrophe, and they rebuilt. Life goes on.

The Cedar Hill Historical Society published a book entitled “Gone With the Wind: the 1856 Cedar Hill Tornado.” It is available at the library or online. Also, anyone wishing to do their own research can do so at the museum Mondays from 10 a.m.-noon.

“I think it’s important for young people to know what’s gone on in the past – even adults,” Klauck said. “It may not be their history, but it’s history.”