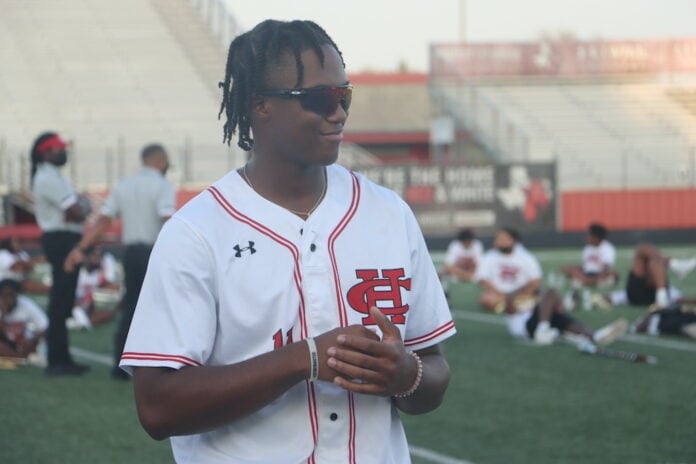 Tavion Vaughns Excited About His Future At OU

Most of it revolves around football, but at least one Cedar Hill High School senior is looking at it from a baseball perspective.

The official announcement came out this summer that OU and UT would join the SEC in 2025 – which would be Vaughns’ junior season in Norman.

He wins either way. If it happens sooner than 2025, he’s in the SEC as a freshman. If the Sooners stay in the Big 12 through 2024, Vaughns and his teammates will get a chance to play in the Big 12 Tournament at Globe Life Field in Arlington – home of his favorite MLB Team – the Texas Rangers.

Either way, Vaughns will be part of a group hoping to restore the OU Baseball Program. The Sooners won National Championships in 1951 and 1994 but have only qualified for the NCAA Tournament twice since 2013.

“OU just felt like home,” said Vaughns, who chose OU over Texas Christian University in Fort Worth “Every time I went there for a showcase, I always played well and was never nervous. All of the coaches are phenomenal.”

Before he heads north on Interstate 35, Vaughns – who has started for Cedar Hill since his freshman year – has unfinished business as a Longhorn.

Cedar Hill, which won a district championship in 2018 when Vaughns was an eighth grader, competed in several games last spring and won four of them.

“It starts with me – I need to be more of a vocal leader,” Vaughns said. “Head Coach (Travis) Collins has taught me a lot as a hitter — to be more disciplined. Character-wise, he’s taught me to be a leader and a better teammate.”

In 27 games last season, Vaughns hit .512 with a .548 on base percentage and 23 base hits, including seven doubles and two triples.

Vaughns was ready to lead the Longhorns as a sophomore in 2020 when the season was canceled (for the most part) due to the COVID-19 Pandemic.

Finishing Strong As A Longhorn

“That 2020 team could have gone really far,” Vaughns said. “I’m very excited to see what the year has in store for us.”

While he spent most of his time at home that spring, he worked out with his personal trainer.

“I still put in the work, although we couldn’t be out as much,” Vaughns said.

As a junior, Vaughns took his classes virtually. So he recently returned to in person classes for the first time since March 2020.

Vaughns is a lifelong Longhorn, having started Kindergarten at Bray Elementary in the summer of 2008. He attended Collegiate Academy before coming to Cedar Hill High School.

“Baseball started to get pretty serious pretty early for me,” Vaughns said. “Baseball has always been my dream sport.

The Next Level Looks Bright

Collins is confident that Vaughns has a bright future at the next level.

“Tavion is and has been a great player for us since his freshman year,” Collins said. “He has all the baseball tools necessary to be successful at the collegiate level and beyond. More importantly, he is an outstanding young man, makes phenomenal grades and his work ethic is amazing. He will stay after practices and get extra work here and then go do more baseball specific lessons and strength and conditioning training at nights. He’s a team leader and handles all of successes with humility, and an uncommon drive to get better.”

He competes in AAU Baseball in the offseason and has traveled to several places for baseball tournaments, including Arizona, Georgia and New York.

Vaughns’ long term goal is to become a sports broadcaster. He will study Communications at OU.

He said that CHISD has given him a strong foundation for the next chapter of his academic and athletic life in Norman. Vaughns has taken both Advanced Placement and Dual Credit classes.

“The athletic and academic experience here at Cedar Hill has been top tier,” Vaughns said. “I’ve really enjoyed it here.”