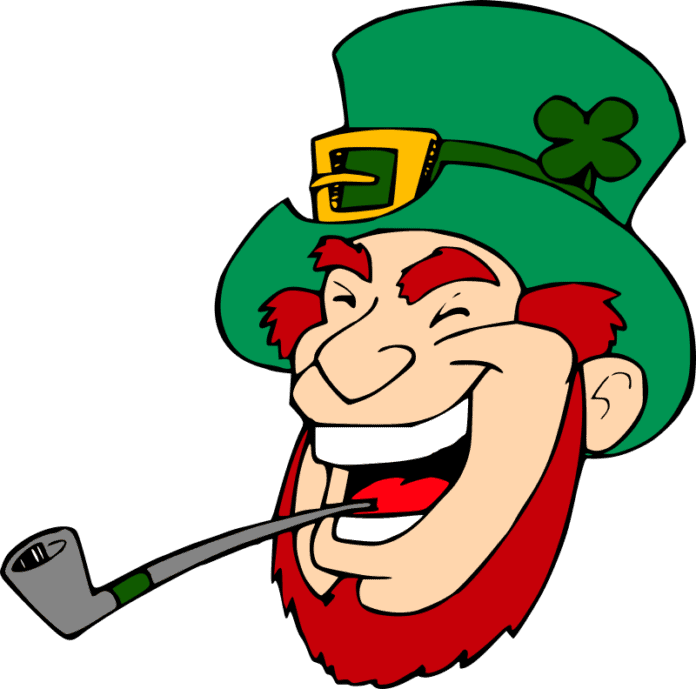 The Irish have always been known for their storytelling. The following story is true. Well, at least it’s as true as any other typical story told by a legitimate Irish historian.

The grass is high in the pasture that slopes toward the lake to the rear of my property. Late one night, as I looked out my bedroom window into a moonlit night, I could see the tall, brown winter grass moving. It wasn’t the wind causing the movement. Earlier that very same night, I had heard voices and singing coming from the direction of the lake.

In the early morning hours, two days before Saint Patrick’s Day, I slipped from the warmth of my bed, crept out the back gate, and moved slowly toward the sound of music and smells of campfire smoke in the narrow glen in the back of the house. Lying on my stomach, I crawled for 15 or 20 feet to the edge of a clearing. Numerous small fires were burning in that clearing. Gathered around those fires there appeared to be nearly 100 small, manlike creatures. They were dressed in greenish garb, and wore pointed green hats. In the tiniest of voices they sang the songs of the old country. The gentle breeze that lounged in the grass brought the smells of burning wood and Irish whiskey. Small bursts of laughter were heard as well as the sounds of fiddles and harmonicas.

I couldn’t believe my eyes or ears. I now had physical proof that leprechauns do exist. But I had no camera and no one else was with me. Even if I swore an oath in public about what I saw, no one would believe me. My downfall had started years ago, when I reported about a talking squirrel. Since then, my reputation was a little tainted. But I wasn’t worried. Even if I told the biggest lie in the country there was still a good political career ahead of me.

Snuggled down there in the damp grass I devised a plan. I would set a trap for a leprechaun. Once captured, I would force him to tell where he kept his gold. If he wouldn’t talk, I would hold him for ransom. If his pals refused to pay the ransom, I would join a touring circus and charge admission for people to view the only known leprechaun in captivity.

The next day I got a shoebox, a narrow six-inch long tree branch and some string. I went back to the previous night’s location. There I tied the string onto the branch and placed it on the end, underneath the shoebox to hold it up. I let the string out and unrolled it out into the high grass. I took a position at the end of the string; ready to pull it once my Irish quarry went under the shoebox.
I baited the trap with fake gold coins that were really chocolate candy, a bowl of Lucky Charms Cereal, and a large order of Burger King French fries. Hours passed, and finally darkness settled in.

Just after midnight, as the moon gathered herself over the glen, I heard something coming. I could see small, lighted torches moving like a long snake toward my position. The movement was really hundreds of leprechauns swaying to the beat of pipes and drums. They settled in around the shoebox trap. They built their fires, passed out their brew and commenced singing. Many were sitting on the box, but none had ventured into the trap.

When I awoke it was morning. I found myself tied up with string and a shoebox over my head. Finally, after I got that darn box off my head and untied myself, I noticed gold coin chocolate wrappers, an empty cereal bowl and a shredded French fry container next to where I was resting. But also, next to a nearly deceased little fire that was barely smoking, lay a fuzzy velvet green hat. It had a dark green shamrock attached to the brim. Inside the inside hatband was a tiny piece of paper. On the paper was drawn a miniature map. But I’ll save that for another story.

Durhl will be out of the office for a while. At least until he returns from Ireland.

Durhl Caussey writes a column read coast to coast. You may reach him at this paper or dcaussey@sbcglobal.net.