Steve Young, a longtime comedy writer for the David Letterman Show, stumbled upon an obscure industry, the American industrial show, in 1993. While looking through record collections for a show segment called “Dave’s Record Collection,” he purchased an album from a GE musical.

Young started collecting these little known recordings that touted the virtues of everything from cars to burgers to bathrooms to silicon. His interest in the secretive industry became both hobby and passion. He eventually met many of the songwriters, directors and stars of industrial shows.

Such famous stars as Florence Henderson, Chita Rivera, Hal Linden, Martin Short, and Bob Newhart supplemented their incomes with industrial shows, often appearing in four or five a year. Young discovered that during their “golden age” Industrial shows usually cost much more than Broadway shows to produce. And the performers were paid very well, too.

Composers like Sheldon Harnick and Jerry Bock (Fiddler on the Roof) also composed industrial shows. So did Sid Siegel, who wrote over 250 industrial shows including Young’s favorite, “The Bathrooms Are Coming.” Five time Tony® Award winner Susan Stroman told Young she perfected her craft directing industrial shows, along with other Broadway luminaries like Bob Fosse.

In 2013, Young and co-author Sport Murphy published “Everything’s Coming Up Profits: The Golden Age of Industrial Musicals.” The hardcover edition is available on Amazon for $37.

Following the book’s success, and after meeting and becoming friends with many of the former performers, directors and creatives of industrial shows, Young started work on a documentary. “Bathtubs Over Broadway” has received glowing critical praise since its release on Focus Features last April. The doc even received a rare 100% rating on Rotten Tomatoes.

Bathtubs Over Broadway Heads For Dallas

Finally coming to Dallas, “Bathtubs Over Broadway” runs Jan. 4-10 at the Texas Theatre, 231 W. Jefferson Blvd. in Oak Cliff. Anyone who loves musical theatre will be enthralled by this behind-the-scenes look at big-budget industrial shows. Watching performers sing and dance about their love of a bathroom (“where I can cream and dream”) is unforgettable.

The golden era of Broadway-style musical shows promoting products for corporations like Ford, McDonald’s, and Xerox ended after the ’80s. Thanks to Steve Young and his deep dive into the hidden world of industrial shows, we now have an opportunity to appreciate these professionally produced musicals. They may have only been seen by a small, select audience of auto manufacturers, plumbing suppliers, or tractor salesmen, but during their golden era they were bigger than Broadway. 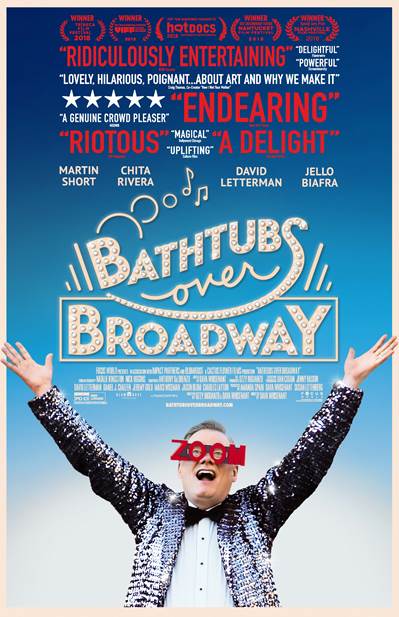