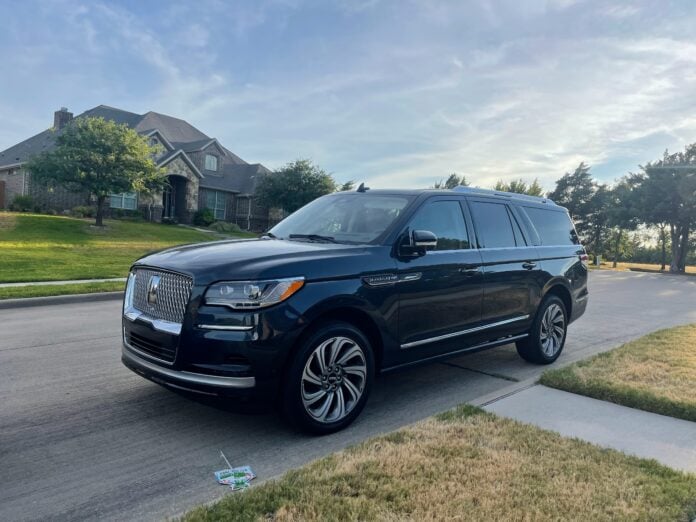 I’m happy to say I have been testing automobiles so long I can remember the launch of the very first Lincoln Navigator in 1997 (1998 model year). I had a Canadian drive partner who, I must admit, scared the daylights out of me as he shot around mountain curves at speeds even I considered unsafe. The good news was that the initial model handled those curves like a true champion and we came back to the hotel safe and sound.

Today’s 2022 Lincoln Navigator model has so much more in terms of safety and comfort equipment one would hardly consider it a descendant from the same family. The space inside was comfortable for everyone traveling, right up to the full complement of our family and Kristin’s brother’s family of four as well.

Yup, seven people, including her almost six foot tall brother Brian (who sat in either the second or third row through a large number of trips) fit wonderfully and comfortably. Why so many trips? Well, you see, our friends at American Airlines cancelled his family’s return trip to South Caroline at least three days in a row (maybe four, I lost track!)

So, we had to drive to the airport on numerous occasions to take them all there and later return to pick them up and bring them back to our house. After the 2nd trip we began to feel like it was Groundhog Day, but the adults would turn the massaging seats on and listen to the Revel® Audio System making the stress melt away.

With all those trips to the airport, I should point out that not only did the vehicle comfortably seat 7 people, but it also held the luggage for a family of four. There used to be a time when large SUVs could carry people but came up short with providing enough room behind the third row for their suitcases.

The MSRP on the Navigator tops out on my test model at a tad over $100k, but the base Navigator is only priced at $77,635. Those wanting one will be pleasantly surprised by the mileage we achieved, which never went below 16 mpg. 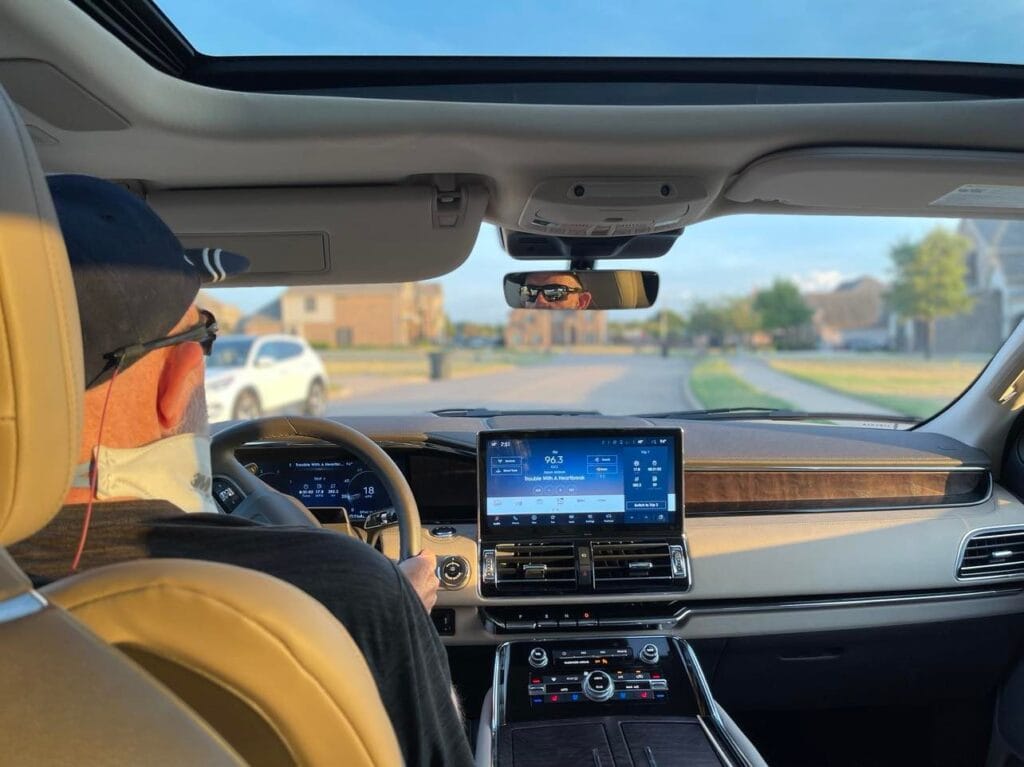 Our model included a number of special features including Lincoln’s new semi-autonomous driving mode—called Active Glide. This is a new system which allows for true hands-free driving. Engaging Active-Glide is simple. One first touches the button on the steering wheel to engage cruise control, which I am assuming everyone is familiar with. Then, the button right above the cruise button will engage Active-Glide. This will allow the vehicle to drive on the highway on its own without driver input UNLESS there is a problem.

No, you can’t just go to sleep and ignore the road nor conditions around you. The system itself will be constantly monitoring the road and the screen on your dash will along with beeping will alert you of any problem. Hands-Free Blue Zones include more than 130,000 miles of dedicated highways across North America in the Lincoln GPS mapping system.

We always recommend staying alert even when Active-Glide is engaged.

Our test model also had an enhanced security system with a special perimeter alarm with an anti-theft system designed to protect against the theft of contents and accessories from the vehicle. The owner can arm and disarm it with the key fob. The owner’s phone can also be programmed to function as a key.

We enjoyed the Revel® Audio System immensely, thinking it may very well have been the best audio we have heard in a vehicle to date.

My test car was not even a top of the line model. That distinction goes to a Black Label L, the “ultimate Lincoln.” The MSRP is on that is $121,210, including the destination fee.

For a vehicle this size and with this power (our model had a twin-turbocharged 3.5 liter V6 with 440 horses and a torque level of 510 lb. ft.), that is quite remarkable. The SelectShift 10-speed automatic transmission had to help with that mpg level. We never felt any jolts or bumps in the changing of gears with every aspect of every ride being as smooth as if we were sitting in a lounge chair of our living room.

Lincoln’s Adaptive Suspension with Road Preview monitors body movements and vehicle motion, as well as steering, acceleration, and braking activities, via 12 sensors – including a forward-facing camera – that read the road 500 times per second and automatically prompt adjustments up to 100 times per second to mitigate any unpleasant impacts. Bottom line: even the worst roads are no match for the 2022 Lincoln Navigator.

The ride was quiet, even with four children along, which is a feat in itself. And who says kids don’t appreciate the finer things in life? Our 14-year-old daughter loved the second row massaging seats and that she was able to control the feature herself from her own seat. The massaging feature on our front seats included door mounted controls as well as being able to turn them on from the touch screen.

Our model also had ventilated seats, which is very much appreciated since the temperature rarely dipped below the century mark during any of our jaunts around the metroplex or to the airport and back! A lot of vehicles have such a feature in the front, but not all that many will accommodate those “in the peanut gallery” with such important features.

The list of onboard features in this Navigator is very long including speed sign recognition, a wireless charging pad, a special place to put your key when in the vehicle, a very large center compartment, a head-up display, special parking sensors, adaptive suspension and – great for this especially hot summer in Texas – tri-zone air conditioning. There have been many instances when our kids have said “this vehicle was not designed for Texas,” when relegated to any rear row. In the Navigator, they were happy, even in the third row.

Sharing this video because the Navigator is really something you should see for yourself:

Readers would be well advised to visit a dealership when they have a spare day to have a representative go over all the features, because I am certainly missing some. In these difficult financial times, good financing rates are still available on the Navigator including 1.9% APR for 36 months, 2.9% APR for 48 months, 3.9% APR for 60 months and 5.9% APR for 72 months. Your own personal credit will determine what rate you might qualify for.

I was so impressed with the Navigator that if we were in the market for a new vehicle, I would be heading to a dealership this week to test the waters on purchasing one for our family! My brother-in-law even said, if the Navigator was in his budget it would replace their aging minivan, making family road trips enjoyable again.