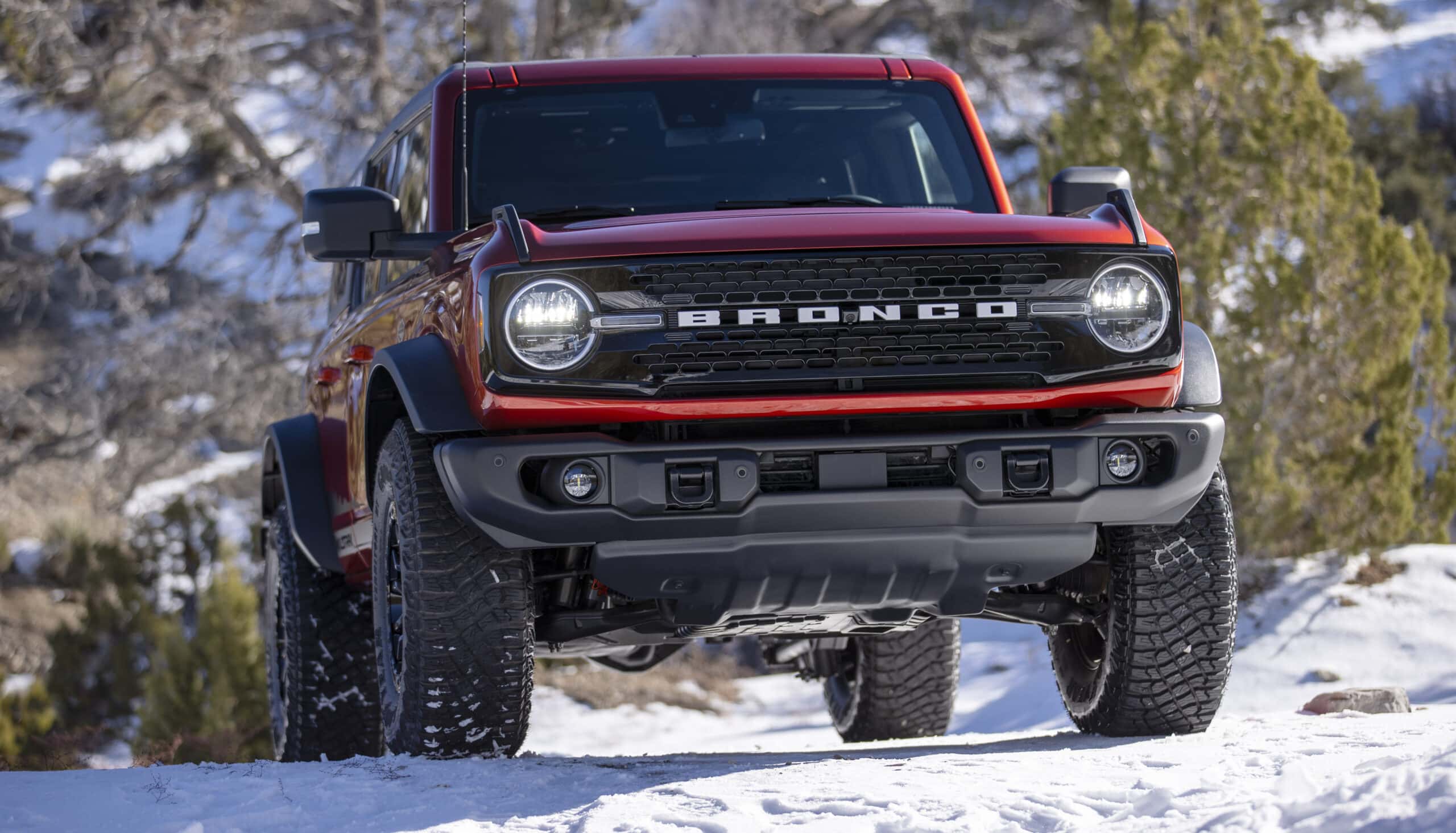 The attractive young brunette had a bounce in her step and a broad smile on her face as she approached me in the health club parking lot.

This caught my attention because even when I was much younger, attractive young women rarely approached me with bounces in their steps and smiles on their faces. Ok, that’s a lie.

“I love your truck,” she exclaimed, nodding toward the brilliant red 2022 Ford Bronco from which I was extracting my gym bag. “It is so cool.”

Yep, that covers it. The Bronco, Ford’s GOAT (Goes Over Any Terrain) answer to the Jeep Wrangler, is indeed cool. End of review. See you next week.

Looking like a box with a slightly smaller box strapped atop and with black trail sights bolted to each front fender, the Bronco is attractive in a muscle-bound, square-jaw sort of way. Ford calls the paint on our four-door tester “Rapid Red.”

On a slightly more serious note, her reaction was a superbly focused synopsis of a vehicle you might be able to buy if Ford ever figures out how to fulfill all the orders it has. Now and then a spare one makes it to the lot of a dealer, who immediately slaps on a supplemental window sticker best perused in proximity to a defibrillator.

When Ford rolled out the new Bronco last year it marked the reappearance of a nameplate missing from the lineup for a quarter-century. When it was discontinued in 1996, the Bronco had long since failed to compete with Wrangler as a champion of boulder-filled pathways.

The first-generation Bronco (1966-78) was designed to serve as an off-road vehicle. Conceived by Donald N. Frey, who also dreamed up the Mustang, it rode on a chassis unique to the model. Targeted at the Jeep CJ-5, the compact-sized vehicle sparked Ford marketing to coin the term “Sports Utility.”

The early Bronco was a halo vehicle, achieving success in Baja racing and – briefly – as a funny car dragster. Only once in its first 11 years of production did sales eclipse 25,000 units. During the same time, Pontiac sold up to 96,000 GTOs a year. The Chevrolet Blazer, Jeep Cherokee, and International Scout II soon cut into Bronco’s market share.

In 1978, the Bronco moved into the full-size SUV segment as an adaption of Ford’s F-series pickups. O.J. Simpson was caught driving one of these.

In ’82, Ford introduced a compact version, the Bronco II. That two-pronged approach was revived when Ford decided to bring Bronco back to life for 2021.

The current Bronco is based on the same body-on-frame, rear-wheel-drive midsize pickup as the Ford Ranger. The Bronco Sport shares a compact, front-wheel-drive unibody platform with the Escape SUV and Maverick pickup. Other than a few styling cues, there are no similarities between the Bronco and Bronco Sport.

The similarities between the old and new Broncos end at the name and intended market. The latest iteration is more competent off-road, more comfortable on-road, and more sophisticated from bow to stern.

A wise man once told me that if you take on a competitor, you don’t need to be as good. You need to be twice as good. Having abandoned the lightweight off-road field to Wrangler for a quarter-century, Ford re-entered with a vehicle that is at least 50 percent better.

Both are amazing off the beaten path and only a professional could say which is better climbing stones and fording raging rivers. That’s a big deal. Ford says that more than half its orders are for the Sasquatch edition, which comes with 35-inch tires, higher clearance, and front and rear electronic-locking hubs.

On the other hand, anyone who draws a breath can tell that the Bronco is eminently better on highways and city streets. The ride, as expected, is on the firm side, but not too much. The feel would appeal to Goldilocks, or even a brunette – just right. Seats are more supportive and amenable to long drives.

To be sure, there is still plenty of wind noise, which is to be expected of a vehicle with removable doors and roof, but the Bronco is much quieter than the Wrangler. Indeed, we were able to crank up some Rock ‘n’ Roll and drown out the wind and road noise.
Handling feels secure. Body lean is surprisingly well contained. Broncos are beefy, with curb weights ranging from 4,400 to 4,800 lbs., and they sit high, with ground clearances ranging from 8.4 to 11.7. Still, the vehicle feels well planted.

Steering is pleasantly linear and confidence-inspiring. Thanks to a multi-link setup up front, road imperfections are absorbed well. Now and then a pothole reminds that there is still a live axle with coil springs in the rear.

The base engine returns an EPA-estimated 20 mpg. The EPA said the 2.7-L delivers at best 19 mpg, but different wheel and tire configurations can affect that. The best we could get out of our Outer Banks version with the 2.7 was 16.8 highway, 14 in town.

Save for the Hemi© model, all of Wrangler’s available engines deliver better fuel economy, so the Bronco will make sure you pay your oil tithes more regularly than the ones at church.

Starting at $30,975, the Bronco comes in six primary trims: Base, Big Bend, Black Diamond, Outer Banks, Badlands, and Wildtrak. All are available with either two or four doors, and the difference is huge. Two-door Broncos have a 100.4-inch wheelbase, and four-door models 116.1. The difference profoundly affects ride quality and interior volume.
Two-door models get a 16.9-gallon fuel tank, four-door models hold 20.8 gallons.

There are three option groups, mid, high, and lux

Do the math and that works out to 36 different models before one considers things like tow packages and an expansive list of dealer-installed options, from lighting packages to a rear folding table.

Our Outer Banks tester had a list price of $41,450. The bigger engine, which ran like a scalded cat and had a rousing engine note, added $1,895. The lux package gave us a 12-inch touchscreen, 360-degree cameras, a kickin’ sound system, exterior lighting, wireless charging, and more, added $3,590. Contrast-stitched leather seating boosted the price by $2,195. Toss in a towing package, storage bags for doors and tops, roof rails, and a few other goodies, and we were at $52,860.

I doubt any of that would matter to the nice young lady. After giving my ride a close inspection, she hopped into a black Mercedes SUV and sped off.