Nissan has completely redone its 2017 Armada. Powered by the same 390-horsepower 5.6-liter Endurance V-8 and seven-speed automatic transmission available in the Titan half-ton and XD pickups, this flagship SUV is the largest and most powerful model in the manufacturer’s portfolio.

The eight-passenger Armada comes in three trim levels — SV, SL, and Platinum and in both two- and four-wheel drive configurations. It gets a fuel economy of 14 mpg city, 19 mpg highway, and 16 mpg combined (for two-wheel-drive models — four-wheel drive models are reduced by one mpg across the range).

Its rugged body-on-frame construction brings a heralded balance of strength, durability, and utility, as well as the ability to tow up to 8,500 pounds. The redesigned body features an aggressive stance with bold V-motion front grille and standard LED low-beam headlights with halogen high beams and LED daytime running lights. 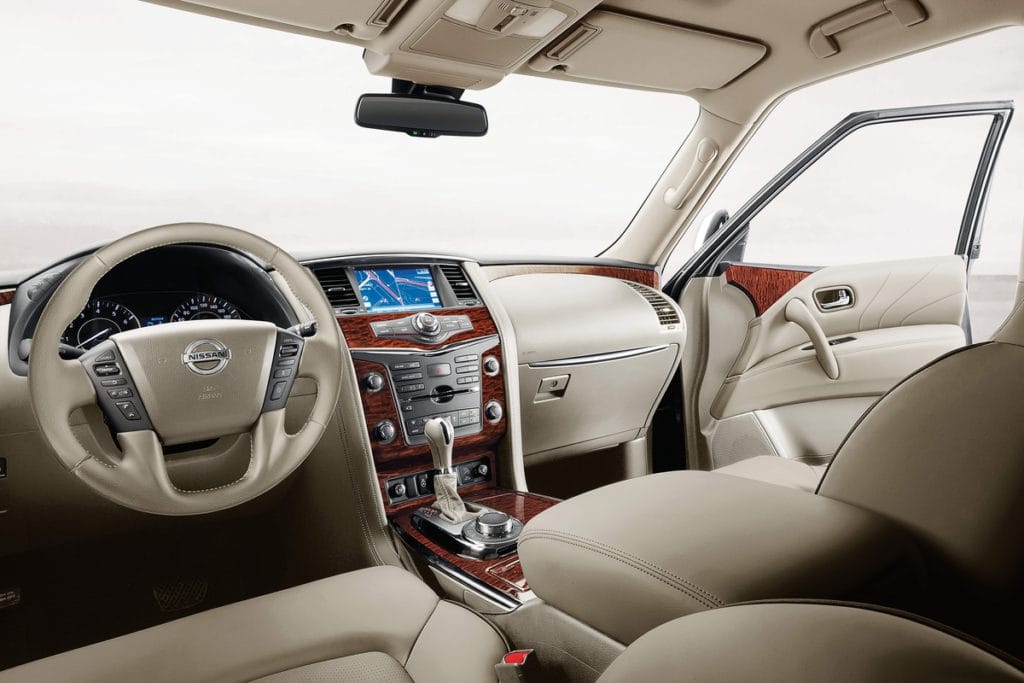 After more than 30 years in the marketplace, the Pathfinder remains one of Nissan’s best known and most popular vehicles. Redesigned with a freshened exterior look, a more powerful engine, and enhanced safety and technology, the seven-passenger 2017 Nissan Pathfinder is offered in four trim levels — S, SV, SL, and Platinum — and both two- and four-wheel-drive configurations.

Outside, the updated appearance incorporates the latest Nissan signature design elements, including the new “V-Motion” grille and boomerang-shaped headlights with LED daytime running lights. Enhancements to the Pathfinder’s interior focus on convenience and connectivity, and include an 8.0-inch touchscreen monitor in the middle of the instrument panel that provides intuitive interaction and control of a variety of driver-selectable vehicle systems and settings – including standard NissanConnect with voice recognition for audio, Bluetooth, and vehicle information.

Under the hood, Pathfinder’s new 3.5-liter V-6 engine is mated to Nissan’s third-generation Xtronic CVT transmission with D-Step Logic Control, which simulates shifts for more natural-feeling acceleration. Horsepower increases to 284, and torque is now rated at 259 lb.-ft.; maximum towing capacity is now rated at 6,000 pounds. And, despite adding more horsepower and torque over the previous generation, the newest Pathfinder’s fuel economy is estimated at 20 mpg city, 27 mpg highway and 22 mpg combined (for 2WD models).

In addition, standard Hill Start Assist helps prevent loss of control when starting and driving away on a steep incline (on both 4WD and 2WD models), while standard Hill Descent Control (4WD only) helps by adjusting speed and brake support when traveling slowly down steep grades and over rough terrain.

This truck is both rugged and soft and is available in an all-new Crew Cab configuration. The bold and aggressively-designed 2017 Nissan Titan, often called a “tweener,” because of its cross-category size that position it in the soft spot between traditional heavy-duty and light-duty pickups has been award-winning since its significant remodel last year. It competes with the Ford F-150, Chevy Silverado, GMC Sierra, and Toyota Tundra.

Whether you select the half-ton Titan or the flagship XD, powerful engine choices make the newest pickup a heavy-duty hauler with the drivability and affordability of a light-duty player. Choices start with a powerful 5.0-liter Cummins Turbo Diesel V-8 mated to an Aisin six-speed automatic transmission, to create 310 horsepower and 555 lb.-ft. of torque, with a maximum towing of 12,314 pounds and a payload of 2,091 pounds. Also available is a 5.6-liter Endurance V-8 engine mated to a heavy-duty seven-speed automatic transmission; it produces 390 horsepower and 394 lb.-ft. of torque. This powertrain offers a maximum towing capacity of 9,390 pounds and maximum payload capacity of 1,610 pounds when properly equipped. A V-6 engine will join the lineup at a later date.

The Titan half-ton has the same aggressive style of the Titan XD, but is built on a completely separate chassis and is about a foot shorter in wheelbase (139.8 inches versus XD’s 151.6 inches). The Titan lineup offers three cab configurations (King Cab, Single, and now a Crew Cab), two frame sizes, three bed lengths, and a variety of trim levels ranging from S, SV, SL, and Platinum Reserve, to an off-road-oriented Titan PRO-4X model; all are available in two- or four-wheel-drive configurations, except for the PRO-4X model, which comes exclusively as a 4×4.