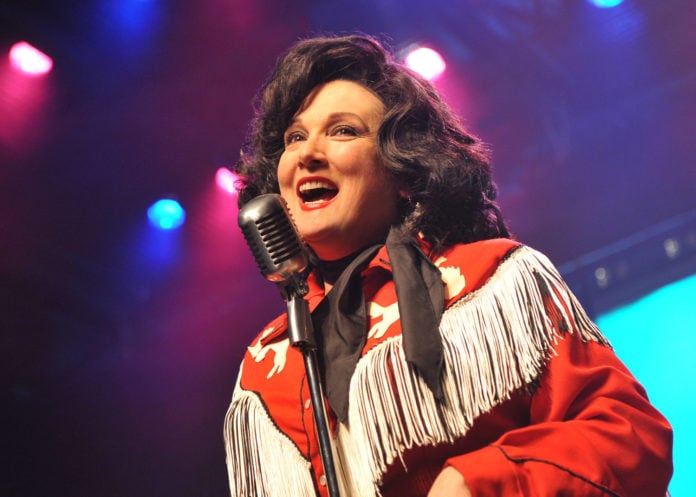 “A Closer Walk with Patsy Cline” In Garland

Julie Johnson stars as America’s favorite country music sweetheart in Dean Regan’s musical tribute, “A Closer Walk with Patsy Cline.” Co-starring Steve Barcus, the musical will be presented by the Plaza Theatre and Mark Bell, at the Plaza Theatre in Garland November 11, 12, 13 and 18, 19 and 20, 201

This production is sanctioned by the Patsy Cline Estate. Tickets are $25, available by phone at 972-205-2790 or online at www.GarlandArtsBoxOffice.com. Performances will be Friday and Saturday nights at 7:30 p.m., with matinees Saturday and Sunday at 2:30 p.m.

A loving tribute to country music’s most enduring superstar, the musical journey traces the legendary singer’s rise from her hometown in Winchester, Virginia to the Grand Ole Opry, Las Vegas and Carnegie Hall. Patsy Cline defined the term “crossover hit” by dominating country, blues, pop and gospel charts simultaneously in the 1950s and early ‘60’s.

Featuring 21 of Patsy’s greatest hits, the musical tribute includes Walkin’ After Midnight, Sweet Dreams, I Fall to Pieces, Crazy, She’s Got You, Seven Lonely Days and the title song, A Closer Walk with Thee. 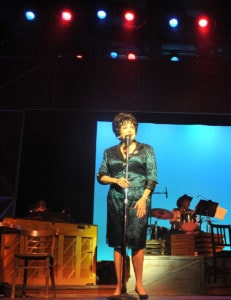 Born Virginia Patterson Hensley September 8, 1932 in Virginia, Patsy was always spunky and devoted to music. She quit school at 15 to work in a drug store and help support her single mother and her younger brother and sister. In return, her mother dedicated her spare time to helping Patsy’s career, and drove her to Nashville when she was only 16 for her first Grand Ole Opry audition. Patsy was never shy about self-promotion and impressed everyone the moment they heard her.

Ironically, her musical talent was never really rewarded until Walkin’ After Midnight, which was recorded 10 years after she began singing professionally. Her incredible musical rendition of this song on the Arthur Godfrey Talent Scouts in 1957 not only won the contest, but finally set her on the road to the acclaim she deserved. It was followed three years later by the memorable I Fall to Pieces. Then came Crazy (written by Willie Nelson), She’s Got You, Leavin’ on Your Mind, Sweet Dreams, and Faded Love. Her last single release was A Closer Walk with Thee.

She realized her lifetime ambition of joining the Grand Ole Opry in 1960 and won 10 awards at the WSM Country Music Festival. In the early 1960s Patsy’s life began settling down-just as her career began to pick up. Two children, a dream home, and a stack of hit records were finally hers, but she would not be able to enjoy them long. Patsy Cline died in an airplane crash March 5, 1963, while hurrying back to her family after a benefit concert in Kansas City.

Patsy’s enduring musical legacy is witnessed by the fact that she is the number one juke-box play in the world. Her Greatest Hits album has sold over 9 million copies, and has been in first place for over 200 weeks of her 700 weeks on Billboard’s “Top Country Catalog Albums.” On March 1, 1995, Patsy was memorialized with a Grammy Lifetime Achievement Award, and on August 3, 1999, she was inducted into the Hollywood Walk of Fame.

Julie portrayed Mama in the first national tour of the Broadway Musical MEMPHIS. She was honored to play Mrs. Lovett in a concert version of SWEENEY TODD at The Morton Meyerson Symphony Center in Dallas. Julie starred opposite Sally Struthers in ALWAYS, PATSY CLINE at Casa Manana in Fort Worth and has portrayed Patsy Cline in eight productions of A CLOSER WALK WITH PATSY CLINE with co-star Steve Barcus.

Julie also starred in a new musical LOOK HOMEWARD, HONKY TONK ANGEL with music and lyrics by Larry Gatlin. She performed with G W Bailey (The Closer) in the Off-Broadway premiere of ROADSIDE by Tom Jones and Harvey Schmidt.

Other credits include: Broadway-Hal Prince’s CANDIDE; Off-Broadway-DAS BARBECU (Drama Desk Nominee, Theatre World Award), Angel in THE RINK (workshop); Regional: Dolly in HELLO DOLLY, Lyric Stage, Irving,  Mrs. Potts in BEAUTY AND THE BEAST at Bass Hall in Ft. Worth,  Miss Mona in THE BEST LITTLE WHOREHOUSE IN TEXAS at Bass  Hall, Mae West in Dirty Blonde at Theatre Three,  Miss Trixie in PAPERMOON at the Goodspeed Opera House and Walnut Street Theatre in Philadelphia,  Mae West in DIRTY BLONDE at Theatre Three, Dallas,  The Mama in OPAL at George St. Playhouse, the Godmother in THE PLEXIGLASS SLIPPER at Lyric Stage plus leading roles in LUCKY GUY, HEARTBEATS, CHESS, BLITHE SPRIT, CRIMES OF THE HEART, NUNSENSE, BABY,WESTSIDE WALTZ, HAYFEVER and Magenta in THE ROCKY HORROR SHOW.

Julie is the voice of Baby Bop on the BARNEY AND FRIENDS series. Movie credits include, PURE COUNTRY with George Strait, THE APOSTLE with Robert Duvall. Julie has also appeared on episodes of AS THE WORLD TURNS.

Julie’s CD’s ALL GROWN UP…SO FAR, and MORE THAN HALF WAY are available at the Plaza Theatre following each performance. Julie was born in Whitewright, Texas and received a Bachelors Degree from Austin College in Sherman, Texas. Julie says her finest production to date is her wonderful son, Trey!