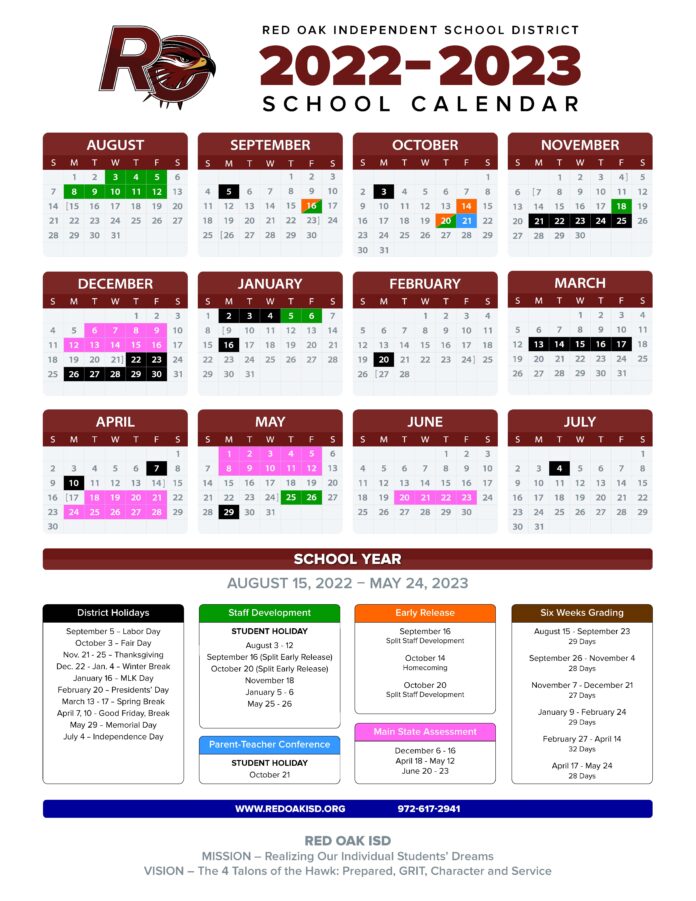 (RED OAK, TX) — On March 28, 2021, the Red Oak ISD School Board approved the calendar submitted by administration for the 2022-2023 School Year. The final calendar looks considerably different than the one sent to staff, students, and parents for feedback because of changes made based on the input received and review of area ISDs released calendars.

“We truly poured over the input from parents, staff, and even students. The primary concern was the implementation of HB4545 to help close the gap for students who did not meet standards on the STARR exams the year before. Next year, instead of 4-5 days of intervention for only those students, we will embed intervention into other opportunities such as summer school, Talon Time, and before, after and even during school,” stated ROISD Superintendent Brenda Sanford.

“The second element we really drilled down to was time teachers have with all students. We feel that the priority should always be on instructional time in the classroom in order to meet the needs of all students,” said Sanford.

Initial survey approval was down from the previous year – with only 67% favorable compared to 74% the year before (which was done before HB4545 and the Academic AID week was introduced). We also saw an increase from 5% to 11% unfavorable. We had 476 individuals take the survey – 66% parents, 26% staff, and 8% students.

“After the survey results, we really went back to the drawing board and looked at what each day meant for student learning – each staff development day, holiday, or break was scrutinized with an intentional focus on putting student learning first,” said Sanford.

“We also evaluated the impact on our employees. We have staff consistently dedicated to moving the academic needle for every student,” stated Sanford. “We have also been very intentional in providing increased benefits and pay raises to our staff. We have increased insurance contributions, retirement incentives, given staff loyalty payments, and look forward to releasing next year’s salary plans soon with raises and step increases for all employees!”

“We know some prefer to start mid-week after the long summer break, but to balance grading periods and semesters, and increase student instruction days earlier in the year, we will start on a Monday this year,” added Sanford.

“We have some unique days in the fall because of UIL travel limiting bus options – we can’t run routes and get the team and support programs to games at the same time,” said Sanford. “Also, drivers have limits to hours they can drive within 24 hours.”

The main reasons for changes: