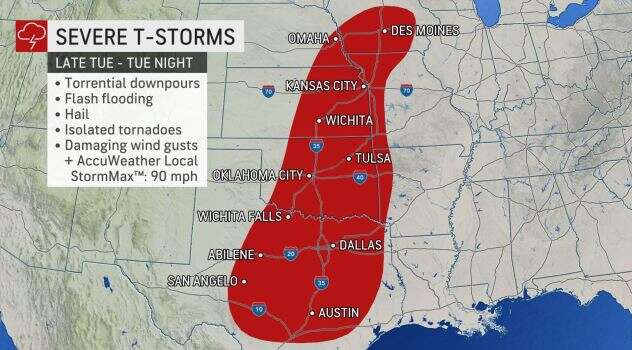 AccuWeather Global Weather Center – March 29, 2022 – A storm system is predicted to sweep across the nation this week, bringing wintry impacts to the Upper Midwest and Great Lakes and all facets of severe weather to the South Central and Southeastern states.

This next storm, which has already delivered beneficial rain to the Southwest, is expected to push eastward from the Rocky Mountains and into the Plains Tuesday as it pulls moisture from the Gulf of Mexico into unseasonably warm air across the south-central U.S.

Areas from central Texas to southeastern Nebraska and southwestern Iowa are advised to remain on alert through Tuesday night. All types of severe weather are possible, from hail and damaging wind gusts to even isolated tornadoes. The threat of severe weather and downpours will continue traveling eastward Wednesday and Wednesday night into areas from eastern Texas to the Florida Panhandle and as far north as southern Illinois. Severe thunderstorms are likely to impact some of the same areas that were slammed with severe weather just last week on March 22, and experts are warning residents to be prepared for more dangerous storms.

“A major concern about this outbreak is that severe thunderstorms will likely continue into the overnight hours, which can be especially dangerous,” said Longley, who advised those in the region to keep a pair of shoes, a flashlight and charged electronic devices nearby when they head to sleep each night.

Potentially severe thunderstorms are expected to arrive by Wednesday morning for cities like Little Rock, Arkansas; Memphis, Tennessee; and Cape Girardeau, Missouri, while other locations including New Orleans will likely wait until the afternoon. Just last week, a New Orleans suburb took a direct hit from an EF3 tornado.

Storms are forecast to speed into Nashville and Birmingham, Alabama, during the late hours of Wednesday. More than 23 million are at risk for some type of severe weather Tuesday, while the number grows to more than 55 million Wednesday.

Both Tuesday and Wednesday are expected to have the threat of nighttime tornadoes. Forecasters say anyone planning to be out in the elements might want to reconsider travel plans as flooding on roadways can be incredibly difficult to see at night and conditions can often change in an instant.

“Portions of central and northern Texas, as well as Oklahoma and Kansas, can be in the bull’s-eye of the isolated tornado risk,” Gilbert added. These thunderstorms, severe or not, can also produce torrential downpours that can trigger flash flooding and reduced visibility on roadways.

More than 23 million are at risk for some type of severe weather Tuesday, while the number grows to more than 55 million Wednesday, according to the National Weather Service’s Storm Prediction Center. The SPC has issued a moderate risk for severe weather Wednesday, which is the second-highest risk category for severe thunderstorms issued by the center. More than 4.3 million live in the area covered by a moderate risk.