Red Oak was able to take care of business at Dallas Sprague Stadium. It might have been a cold night, but the Hawks of Red Oak were red hot. Kimball was not able to slow down Red Oak at all. The final score 48-13 indicated a decisive victory.

Red Oak started off with the football, moving the ball down the field on a 14 play drive that ended with a powerful 13 yard touchdown run by Zach Sanders (10 att 67 yds 2 td). Unstoppable, Sanders carried a couple of Kimball Knights into the end zone with him.

On the next drive, quarterback Joshua Ervin (184 yds 3td) threw a rope to the explosive receiver Coby Cavil (7 rec for 72 yard 2td) for a 20 yard touchdown. Ervin was not done for the night, as he was able to complete another touchdown pass for 24 yards to LaKelsey Johnson (3 rec 48 yds 1td). Johnson cut up field and used his blazing speed to help Red Oak take a commanding 20-0 lead in the second quarter.

Red Oak’s menacing running back C.J. Palmer was able to inflict pain on whoever tried to tackle him. The crowd was in for a treat as Palmer rushed for 189 yards on 24 carries and two touchdowns. Palmer scored on a 36 yard touchdown run when he broke past the first level and then utilized his speed to score. On Palmer’s second touchdown, he used his power to drag a would be tackler to the end zone. 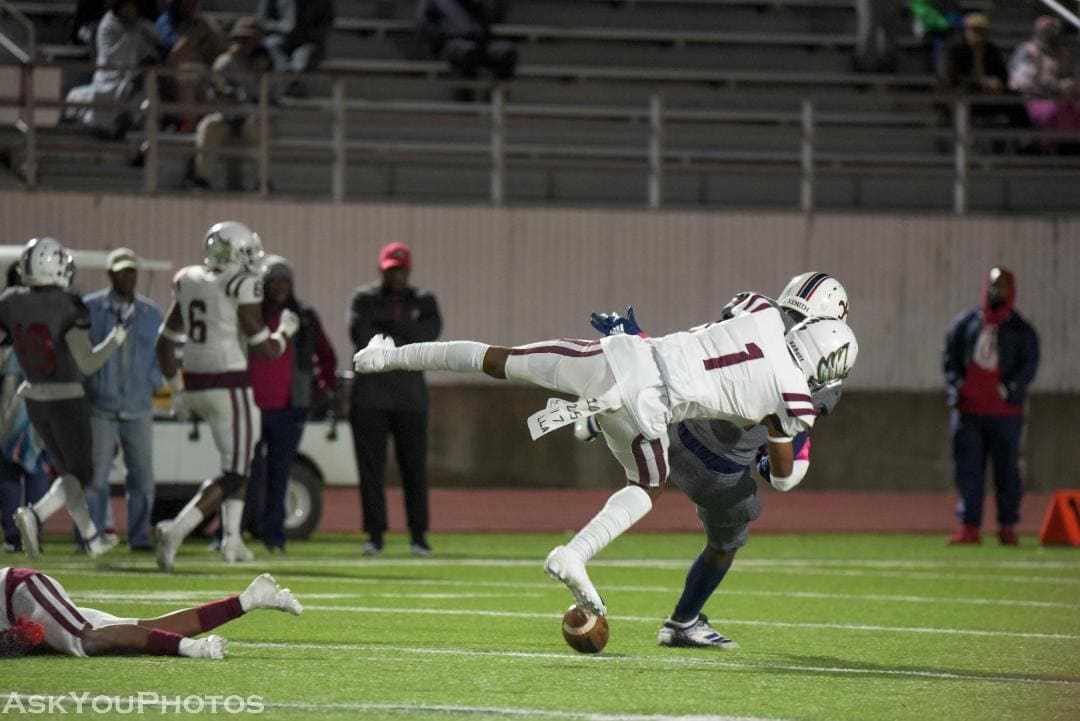 The Hawks team defense was dominating all game long. They were able to hold the Kimball Knights to negative 17 yards. The passing attack did a little better, but they could only muster up 161 yards. Red Oak created two interceptions and one fumble. Cater Lincoln had two interceptions for touchdowns but both were called back. Another was totally negated from the books because of a flag on the Hawks. Cornerback Kevaris Hall made a monster strip hit that was recovered by Cory Cavil.

Red Oak’s head coach Chris Ross told his team that they will be the first team to win district since 1982. Hawk fans, buckle up, because this ride is not over yet. The Hawks will play their next game at Wilmer Hutchins vs Adamson at 7:30pm.

All photos by John Askew of Ask You Photos.