Severe Weather In Ellis County Left Many Without Power

DESOTO – The storms that came through Dallas and Ellis Counties last night didn’t choose favorites. While the local weather channel came on television offering one warning after another, a tornado was photographed making its way across 635 to the north.

In the southern part of Dallas and Ellis County the emergency sirens were going off in just about every city. In my own backyard we discovered a downed tree in Red Oak after the second batch of storms came through in the early morning hours.

Beginning at around 9 p.m. the sky was looking very ominous as the clouds rolled in, and the sirens blasted. On the street where the newspaper office is in Desoto, a power line was still blocking Marilyn Avenue this morning.

City of DeSoto Communications Manager Matt Smith said “All went very smooth. DeSoto had no damage reported other than a downed tree in a residence on Cripple Creek. I’m told that our crews were able to remove that without any problems. It was a good team effort between DeSoto and our Best Southwest Partnership Neighbors. We kept in constant communication and we routinely posted cautions and warnings from the National Weather Service and Code. Our caution postings actually went up a couple of hours before the storms entered our area and continued past 2 a.m.”

DeSoto did briefly activate the outdoor warning sirens in the Southern portion of the city as a precaution due to the proximity of the tornado warning and subsequent tornado activity well to the south.

Smith also said, as a reminder, the outdoor warning sirens are designed to warn people who are outside in a storm to take shelter inside and seek current weather information from a reliable weather service such as the National Weather Service.

“This is one big reason why we encourage those who have not yet done so to sign up for DeSoto’s Code Red emergency weather alert system. Code Red provides residents who sign up with instant targeted warnings from the National Weather Service. They can learn more about Code Red at www.desototexas.gov/codered,” Smith added.

The alarms sounded in Glenn Heights too. That city that saw its share of tornado damage not too many years ago during the holiday season.

Glenn Heights City Manager David Hall said, “We activated our sirens, but there was no damage.”

Midlothian damage in parts of the city. Clyde Melick, Assistant City Manager said that the city is currently in the process of assessing the damage. Power outages impacted schools in Midlothian ISD and classes were canceled today. Shortly after 3 pm, notifications went out that power had been restored and MISD will resume tomorrow.

“We did get high winds and from reports we know there was some damage to property,” Melick said. “We don’t have any more details at this time.”

Damage But No Injuries

Residents in Midlothian provided more details of storm damage. Kay Wiggs who lives in the downtown area reported “I know around Highway 67 and 9th street there were high winds and my power was out for about two hours.”

The Lighthouse Church in Midlothian experienced significant damage to their building. They’re thankful no one was hurt. After posting photos on Facebook they shared that while the building may be gone, the church is more than a structure.

Wilmer’s City Manager Dr. John Hubbard said high winds and down trees were the only big problems in that city.

In Ferris, roofs were blown off some buildings. High wind damage was apparent Monday morning, and electricity was still out at noon.

Mansfield residents posted pictures of hail and many speculated roofs would need to be replaced. Most of Dallas was under severe weather or tornado warnings until Monday morning. Yet when the sun rose today, the weather was beautiful in the wake of a destructive storm.

UPDATE:National Weather Service has confirmed: 2 brief tornadoes occurred in Ellis County Sunday evening. One near Midlothian – rated EF-1 with 100 mph winds. The other was in Ferris – rated EF-0 with winds up to 85 mph. 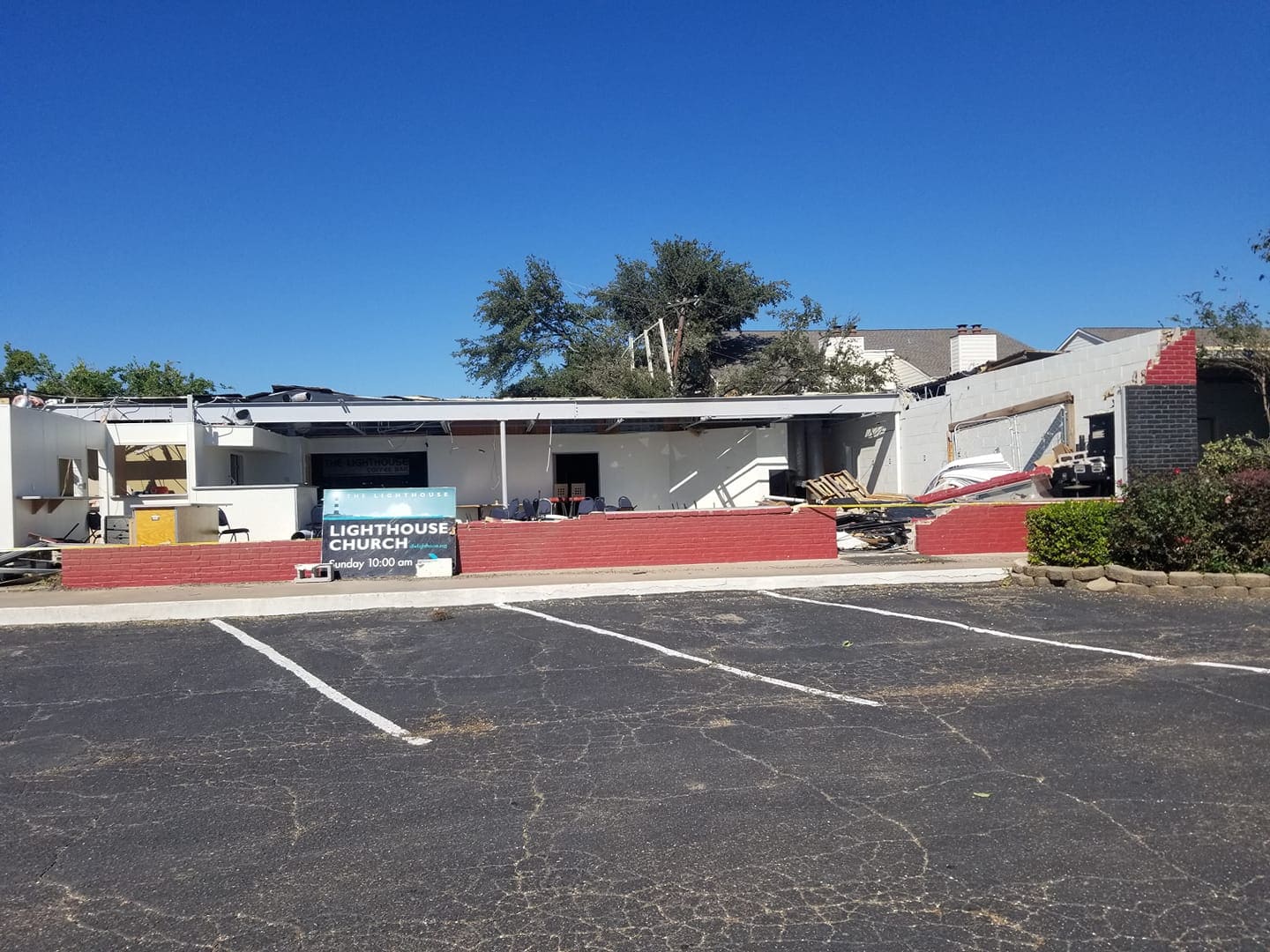