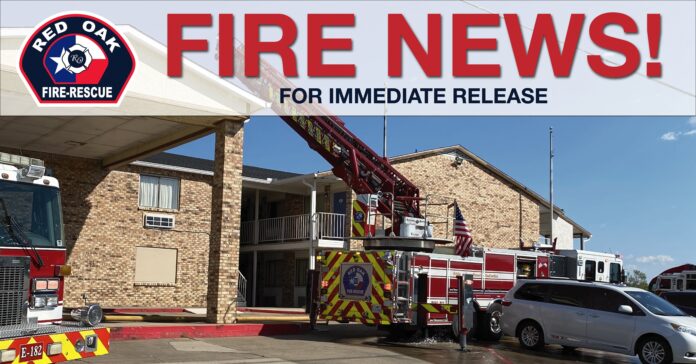 No Injuries At Motel 6 Fire,  Thanks To Quick Response By Red Oak Fire Rescue

Red Oak Fire Rescue responded this afternoon at 3:25 pm to a reported structure fire at the Motel 6 located in the 200 block of S I-35E where a two-story motel was found to have a fire on the second floor above the office area. Motel workers heard the fire alarm and quickly noticed smoke in the office area. The Battalion Chief was the first fire unit on scene and noticed smoke coming from a second story window above the office area. The initial arriving engine company made entry on the second floor to an apartment used by employees where they located the fire in the kitchen and quickly extinguished the fire.

All occupants were evacuated without incident or injury with the assistance of Red Oak Police Department.

The fire was contained and placed under control in about 30 minutes after the initial engine company arrived. Ovilla and Waxahachie Fire Departments were dispatched to assist at the scene. Desoto Fire Department provided back fill coverage at Fire Station 181 while crews worked the scene. Property damage and contents is estimated at around $10,000. Fire investigators from Red Oak Fire Rescue investigated the cause and origin of the fire which was determined to be items left on the stove.

Once it was determined to be safe all hotel guests were able to return to their rooms. Great job Red Oak Fire Rescue.