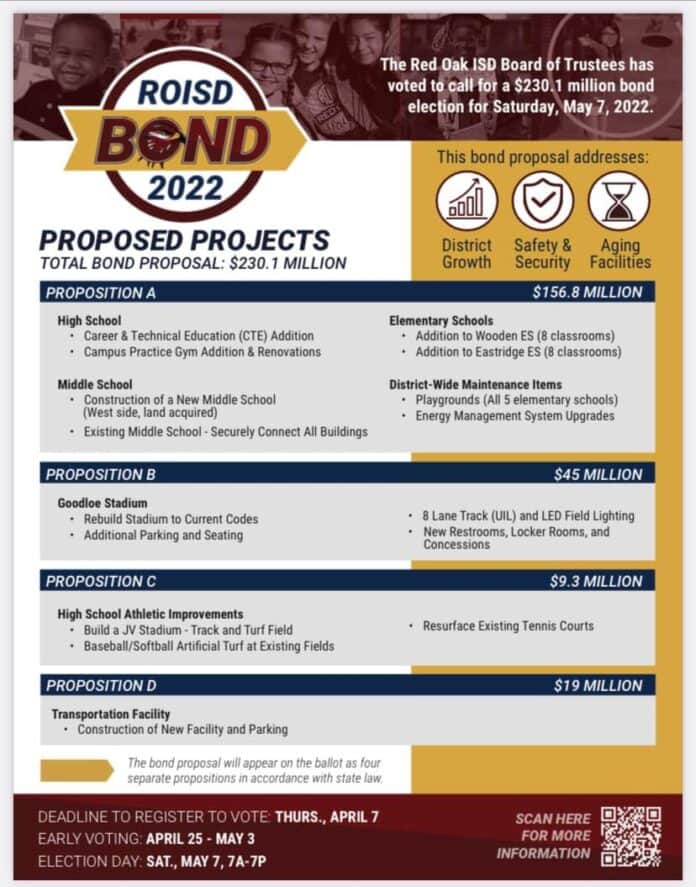 A major decision looms ahead of folks in Red Oak. A school district bond in the amount of $230.1 million is up for election on May 7.

Nearly all of the schools in the ROISD are close to or at full capacity, officials note.

Among the uses of the funds, should the bond pass, they say are:

As always, there are those in favor and those in opposition. Focus Daily News gave groups leading the charge for both schools of thought (yes, pun intended) to vocalize their logic.

Yes group, led by Bryan Bell, parent and leader of Red Oak H.E.R.E. (Hawks Expanding Resources for Everyone), also former committee chair for ROISD Citizen’s Facility Planning Committee Bell said the group is in favor of the package because Red Oak is at a turning point.

“With all the development and growth that is going on in the communities that ROISD serves, we have to do something that elevates the crowding we already have in the schools and prepare for the growth that is coming,” he said. “This includes creating classroom space, repairing a crumbling stadium, making improvements to athletic areas and making sure the transportation department can get our kids to school.”

Bell said that while they banter with the opposition on social media, there have been no formal conversations for a compromise.

The group is using a variety of techniques to get their message out. These include 500 yard signs out in the community, as well as some larger signs, sharing on social media, most important, Bell said, they are getting out into the neighborhoods through block walking, showing up to community events, and stopping and talking to any and all groups.

“We also host events where people can come together, ask questions, discuss the bond, and get information,” Bell said.

Bell said there is no one single item his group feels is most important in the package. They believe the entire bond package is important.

“All four Propositions are tied into creating well-rounded and career-ready graduates of Red Oak ISD,” he said. “Time in the classroom, as well as in athletics, robotics, or any other extracurricular activity is essential to the development of a child’s abilities in academics, leadership, teamwork, and citizenship.

“Keep in mind that when the Citizens’ Facility Planning Committee developed this package and presented it to the board, they understood that voters may agree with some parts and not with others. We are asking people to vote yes for all four props, but if you do not support one, you can still support the others.”

Bell stressed that the latest numbers from the school district indicate there can be a total of $206 million bond approval without any increase to the interesting and sinking (bond) tax rate. He added that if a person is 65 years or older with a homestead exemption, their property taxes cannot go up, no matter the results of this election, unless they make a significant improvement to their home.

The It’s OK to Vote NO group, led by activist Amy Hedtke, a Waxahachie resident who has a history of opposing bond elections

Hedtke and her group have a simple message in opposing the entirety of the bond package, “It’s Ok to vote no, Red Oak!” Their main sources of distributing their message have been through Facebook posts, blockwalking and posting signs that read “Vote no on bond$,” emphasizing their reasoning with a dollar sign replacing the “s” on the word bond.

Their biggest problem, Hedtke said, is that this is a property tax increase, something she has vehemently fought in Red Oak and other areas for some time, never mind that she is not a resident.

“Taxes have been too high for decades. If the local taxing entities can’t proactively rein in their spending, cut administrative bloat, and pare down programs to core-curriculum to meet their Article 7 purpose, then it is left to the community to reject more spending and debt till they get their tax burden decreased,” Hedkte said. “If all four propositions pass, the debt level will swell to almost half a billion dollars that the children will have to pay off.”

Hedtke argued the legal bond proposition doesn’t even bind the district to the proposed tax increase.

“It flat out authorizes a tax ‘without limit as to rate or amount.’ And that’s not a gofundme to donate your own portion of taxes, but an authorization to take money from your neighbors,” she said.

Hedtke also emphasized this bond package is full of pork spending. She said the district would have better success if they had packaged this as just a middle school bond and kept it specific in the bond order verbiage.

“I hope residents will vote this down on May 7, and look forward to seeing the turnout at the polls,” she said

Whether you vote yes or choose to vote no, we encourage all of our readers in Red Oak to vote and be involved in the decisions impacting the future of your community. More bond information can be found on the Red Oak ISD website.