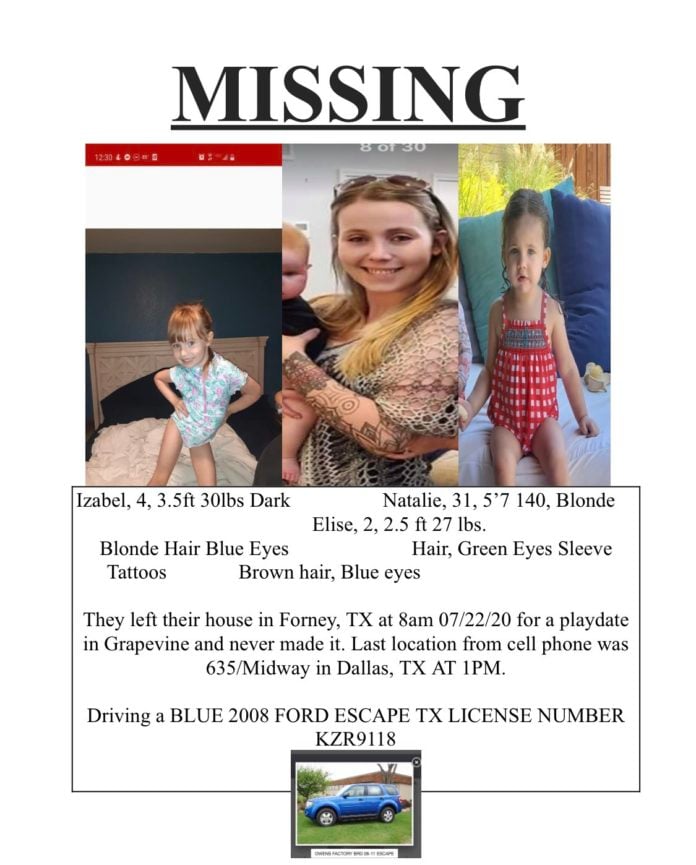 Farmers Branch-July 23, 2020 – On July 22, Natalie Chambers, 31, and her daughters, Izabel 4, and Elise, 2, were reported missing according to the Kaufman County Sheriff’s Department.

Police say Natalie and her daughters left their Forney house around 8 a.m. Wednesday for a playdate in Grapevine, but they never arrived.

This morning, at approximately 10:11am Farmers Branch Police Officers were dispatched to the area of 13300 Midway Road at the request of the Kaufman County Sheriff’s Office to assist in attempting to locate a missing person, Natalie Chambers, and her two children ages two and four. Natalie’s car, blue Ford Escape, was found in the old Freed’s Furniture store parking lot.

Tragic update this morning. The bodies of Natalie Chambers and her two children, Izabel and Elise, were discovered in their vehicle in a Farmers Branch parking lot. https://t.co/qsxxJAvaJZ

Upon arrival at the location, responding officers located Chambers’ vehicle, blue 2008 Ford Escape, in the parking lot of 4300 LBJ Freeway. Officers approached the vehicle and discovered that the three occupants of the vehicle were deceased. Farmers Branch Police Detectives are conducting an investigation that is still ongoing at this time. At the moment, cause of death is unknown.

NBC DFW had live coverage of the parking lot and the vehicle was towed away in the last few minutes.