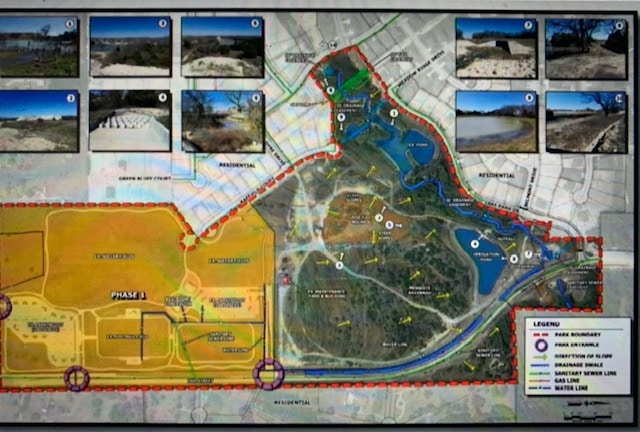 Midlothian- The most pressing issue the City Council has been looking at in recent weeks has been the Community Parks projects. At the June 23 City Council Meeting this came to the forefront with the very first speakers (Nikki Carpenter and a gentleman) during the public forum.

“The reason why we came today is that we really wanted to talk about the Community Park, Phase 2, he stated. “Our community has a very vested interest in getting the Community Park Phase 2 completed. We are all behind the two million that’s already there and adding the additional five million in sales tax.” He continued that council should have a petition that 287 residents have signed in support of Phase 2. “It’s more than a place for children to play,” he added.

“We all know what’s going on in today’s society. There are more opportunities for children to have engagement with diversity and opportunities in playing,” he continued. “I think this will be of great benefit.” 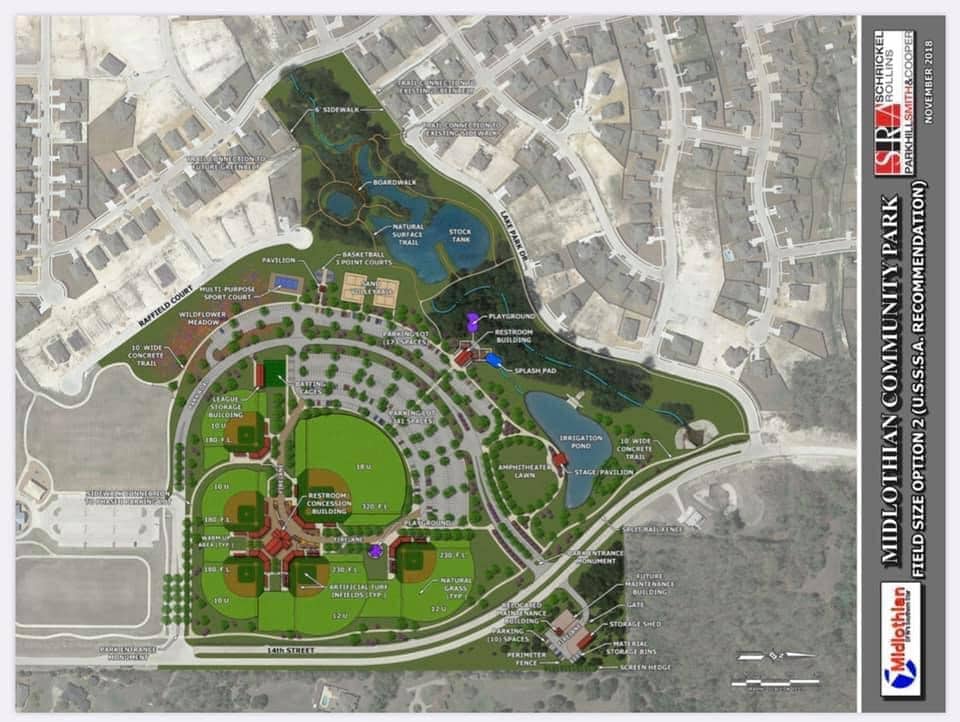 Ms. Carpenter said that she not only talked with neighbors but also kids. One child not only spoke with her, but also wanted to sign a petition. Kids told her they wanted a big splash pad, because they were told that’s what they were going to get. “They want this park so bad. It’s really sad that they are staring at a pile of dirt.”

There were a number of items in the overall $18.4 million project (City Council Item 2020-201) which were presented as time sensitive and needing to be passed at the Tuesday meeting. Clyde Melick, Assistant City Manager presented these as stamped and stained concrete for $336,794, decorative concrete in tree islands for $99,253, a modular concrete block wall ($109.216, an original baseball restroom for $353,209 and an original playground restroom bid at $278,764.

When asked which of these Melick considered most important, he said: “I think the stamped and stained concrete and the original baseball restroom. Those are the two features that are really going to be prominent in this. That baseball restroom is going to be a focal point. The stamped and stained concrete is going to set us above – apart from everything else.”

Clark Wickliff stated “I feel that the stamp and stained concrete would put us over the top, but we would get more use out of the multi-purpose courts and sand volleyball … don’t get me wrong, the top section is what’s going to make it much classier, but, at the end of the day, it’s a park. We are not trying to look that good.”

A Packed Park Regardless of the Economy

Alan Nix then addressed the Council saying “No matter what happens with this economy, that park is going to be full … and truthfully, maybe six months down the road we can look at adding basketball courts, we can add volleyball courts. We can add all those things into the project as it goes. Now, if you can just look at the things that are really time sensitive. Then, we can move forward and look at the things that are not time sensitive … come back, and let 4B look at it.”

Mike Rogers responded that he had received many calls with discussions on focusing on what the community could use. “Folks felt that some of the courts were being omitted. They were concerned that we could get into amenities that would be pretty, but not nuts and bolts of what people could put to use.”

Mayor Reno asked ACM Melick if the time sensitive issues had to be done immediately and Melick replied they do. The prices will go away if not done at that meeting. Ted Miller replied “We need to make sure we vote tonight, and we don’t drag this thing out any longer.”

After ticking off some of the items, City Manager then stated “At this point we have $353,000 (the baseball restroom)… then we start picking the things at the bottom.

A Long and Difficult Process

“This has been a long and difficult process,” Mayor Reno said. “I see three points I would like to make. Financial, services to the citizens, and what I call quality of life in Midlothian … going forward, we are going to have to moderate our behavior … we need to be mindful of the budget.” The mayor then called for a motion.

Mayor Pro-Tem Coffman moved “… accept the proposed contract for $18.4 million dollars with the addition of returning the original design of the baseball restroom for $353,209, to also include the multi-purpose court for $89,992, include the sand volleyball courts at $137,111, and also include the court lighting for $109,872.” After seconding, the motion passed unanimously.

There have been over ten meetings since April of 2019 concerning the downtown master plan. The Downtown Plan is intended to provide an overall strategy and guidelines for what future development could look like in the area. This includes addressing the design of the building form, streets, public spaces and branding strategies. The ultimate goal of this document is to present an innovative, yet realistic vision and strategy for strengthening Downtown Midlothian as an economic driver for the community.

Public input was sought through the Midlothian Wine Walk, the Advisory Committee, Stakeholder interviews, an online survey and through a public open house by invitation. “Our goal was to see what people wanted in their downtown.” One of the aspects in the plan is a new city hall on 8th street across the street from the current one. The plan calls for downtown to expand outward several blocks. Kimmel Park would be brought into the downtown area.

Some aspects of the plan can occur in a shorter term (1-3 years),whereas others will be much further down the road. For instance, upgrading parking in front of the existing city hall with food truck hook-ups could occur within the first three years. A bicycle and pedestrian facility on Railway Avenue connecting Margie Webb Park, the activated rail year and the development south of Main Street to the rest of downtown is projected to be possible within four to six years. The most expensive part of the plan, reusing the existing City Hall to include dining, nightlife and other uses is not foreseen until between seven and ten years.

The public hearing on the plan was closed by unanimous vote. Mayor Pro-Tem Justin Coffman said “We got a lot of feedback from the community so I feel that this is an accurate representation of the voice of Midlothian citizens.” He then made a motion to approve it as submitted, which passed by unanimous vote.