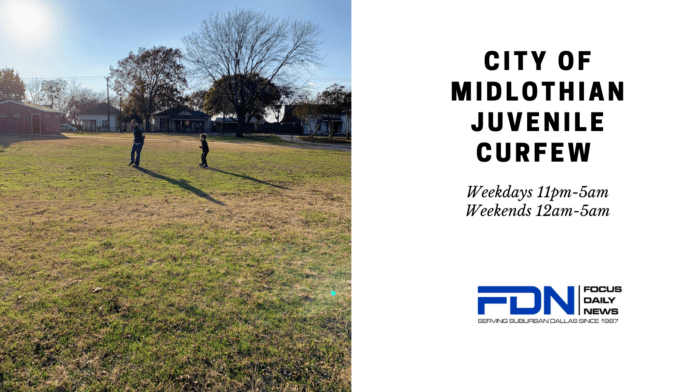 Juvenile Curfew In Midlothian Applies To Minors Under 17

MIDLOTHIAN – The agenda item came before the Midlothian City Council this week because of the Sunset Law. According to Midlothian Police Chief Carl Smith it is actually a tri-annual event brought before council for public hearing to ensure council is aware of the city’s juvenile curfew.

The ordinance is normally presented every February for approval.

The public hearing was heard and approved unanimously to continue the ordinance for a curfew for minors under 17 years of age. This prohibits any unsupervised or random movement of juveniles during the night from the hours of 11 p.m. to 5 a.m. on weekdays with weekends from midnight to 5 a.m.

Staff said this ordinance is necessary to “prevent harm to the juvenile as well as deter crimes otherwise committed by juveniles.”

This ordinance has been in effect for a number of years and Smith said “we talk about the conjunction of increased activity at night to our parks and this ordinance is designed – and we are working with our city attorney to modify our park ordinance – to mirror the timeframe that the parks would be closed.”

This means if someone is in the park after closed hours, officers would be able to make immediate contact due to the curfew since this would be a violation of the ordinance.

“We believe this ordinance has value and we continue to see its value at night,” Smith said. “Many of this past year’s contacts were repeat offenders and actually people we have validated were involved in criminal mischief.”

Midlothian Mayor Richard Reno asked Chief Smith how many contacts per months the Police Department sees in the parks.

Smith said it varies from year to year, but in the past year they had about two to three contacts after midnight. He said that number was increasing as the population of Midlothian increases.

Smith added, “We are seeing camera views that show juveniles walking through the park at 2 a.m. and 4 a.m. in the morning and we see those kinds of increases. We also get a lot of camera views from local neighborhoods of teenagers late at night and especially in areas where we see burglary of vehicles and attempted burglary of vehicles and mischief.”

The chief concluded the ordinance is just one more tool that gives officers the chance to keep crime down in the city.