Enjoy sports and all the thrills (and sometimes heartbreak) that comes along.

Enjoy life even more, because, while we can typically anticipate to a degree when the sporting event will end, it’s not so with life.

Mansfield Tigers head football coach Daniel Maberry is an example of this. Much like some of the games he coached, his life was up and down in his final couple of years as he battled lymphoma, eventually succumbing to the disease Feb. 4 at the age of 47.

For a coach, 47 is often when one is preparing for the pinnacle of a career, not the end of life. It’s an age considered young by virtually everyone in the field, a profession in which it is not uncommon to coach well into one’s 70s – or even 80s.

Daniel Maberry, from all indications, understood that while coaching football was a passion, life was, well, life. Of course, you give your best to both – and he was a good coach – but you can walk away from coaching without success and move into something else. There are no options on walking away from life without success.

Lived life to the fullest

He also understood that, as cliche as it sounds, we do indeed have just one life. It’s a shame, perhaps even a dishonor to our maker not to enjoy it to the fullest – which he did.

“He loved to laugh. He lived that to the end,” said Mansfield Athletic Director Philip O’Neal, a good friend to Maberry. “He came to work last week and he was upbeat and positive, still laughing.

“I’ll always remember what an incredible attitude he always had, no matter the circumstances. Joy was at the center of his Christian beliefs. He would always say, ‘I’m full of joy’ – and he was.”

Though I never got to know Maberry, really, I know he was loved by a lot of folks for more than just winning football games. When the community found out about his illness after he was diagnosed in January of 2018, they rallied to raise almost $100,000 to help the family.

It’s a lot easier to battle even the mightiest football powerhouses on the field than it is to fight cancer on a coach’s salary.

Coach put up a fight

But he did fight it, and it even went into remission for a short time. Unfortunately, like football teams, cancer can sometimes make a comeback, and so it did with Maberry, running out the clock this week.

Through it all, Maberry did his best to keep coaching, to keep mentoring young men, encouraging them to take on more than just a football opponent, but to challenge the world. His time on the sidelines became more and more limited in his final two seasons, but they nonetheless knew they could count on him to be their biggest fan – and always be their leader.

That was true for the Mansfield community as well.

“He was an inspiration to me, being there for his family and students any time he could. He allowed the public into his fight,” said Mansfield School Board member and former board president Raul Gonzalez. “There is no telling how many cancer fighters Coach Maberry inspired to keep trying to stay with their families like he was fighting to do.”

Gonzalez knows that battle all too well. He defeated prostate cancer 15 years ago.

“I have prayed with many others that Daniel Maberry would have the same outcome, but like too many it was not to be,” Gonzalez said. “He will always be remembered in MISD’s Colors for Caring, along with so many who are dealing with cancer. God rest him and bless his family.”

Daniel Maberry was loyal and patient. He came to Mansfield in 2002 and spent 14 years as an assistant football coach and track coach before being promoted from offensive coordinator to head football coach. Once he got the job, he proved he was the right choice, leading the Tigers to a 21-5 record in his first two seasons at the helm, including back-to-back district championships with a 14-0 record.

Players got the credit for winning, he took blame for losses

And, as O’Neal noted, when his teams won the players got the credit. When they lost, he would say it was him who had to do something better next time. That’s simply what good coaches do, that’s how they get even the smallest players without enough strength to push out a loose brick to run through a solid wall.

“Because he loved them, they loved him back,” O’Neal said. “Players know when you’re genuine, and he was.”

Some might say Maberry lost his greatest battle to cancer. Perhaps a better way to remember him is to say he took on life and all its challenges and not only came through victorious, though it was a shorter contest than many others had (not all sporting events are long, either, remember), bringing others along with him for the win.

Services for Daniel Maberry will be at 2 p.m. Monday, Feb. 10, at Mansfield ISD Center for Performing Arts, 110 Debbie Lane in Mansfield. 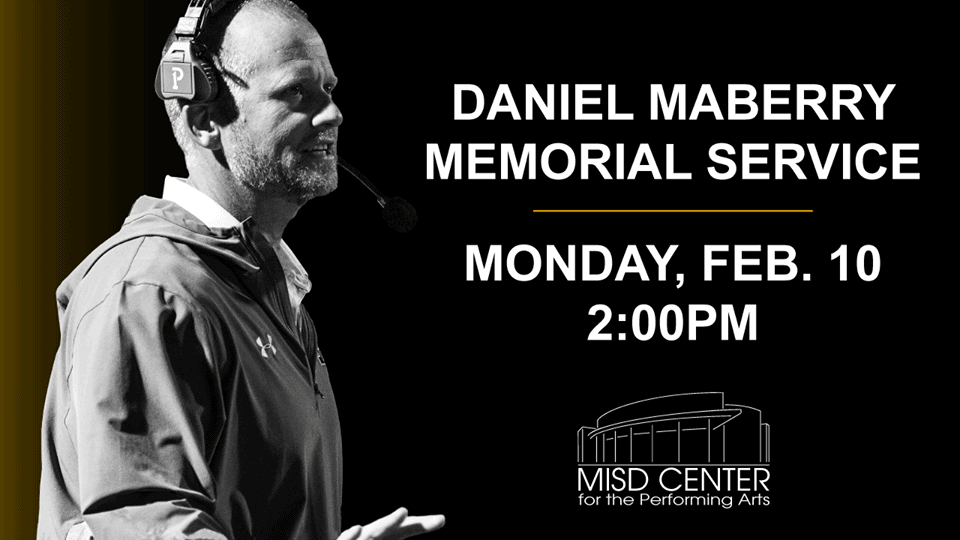