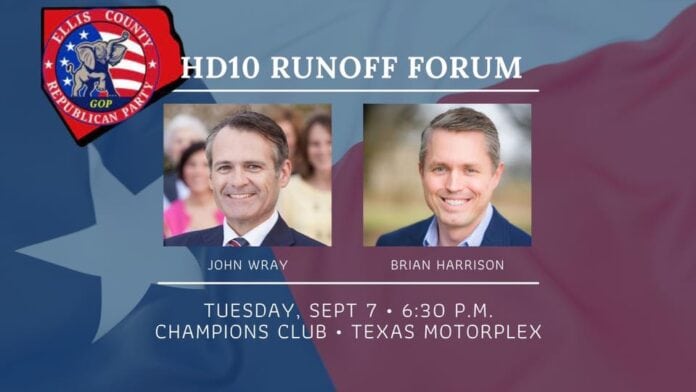 ELLIS COUNTY – It was a poor turnout Tuesday for the District 10 special election. There are 122,520 registered voters in Ellis County, but only 10,783 cast their vote for a seat that was vacated due to the former representative’s departure for Washington DC. Overall,  only 8.80% voted in the special election this week.

Republican Kevin Griffin had 851 votes or 7.90%, Clark Wickliffe 342 votes or 3.18% and Susan Hayslip, who had dropped out asking her supporters to throw their votes to Harrison came in with 32 votes or 0.30%.

Harrison, who most recently served as President Trump’s Chief of Staff at the Department of Health and Human Services had said early on that his main objective, if he heads to Austin, will include getting back to pre-pandemic economic growth and job opportunities.

“I will fight policies that lock down our economy and that discourage people from working. As the Chief of Staff at HHS who oversaw Operation Warp Speed, I am uniquely suited to make the case against mask and vaccine mandates,” Harrison said. “We also need to employ new tactics, like COVID treatment centers. One of the core pillars of Operation Warp Speed which has been largely ignored by the liberal press was therapeutics. These successful therapeutics save lives, which is why we need to quickly stand up treatment centers, in order to help prevent people from being hospitalized.”

He said a second challenge he hopes to overcome is the border crisis.

“Biden is now flooding Texas with thousands of COVID infected illegal immigrants and putting the lives of Texans in jeopardy. Given my knowledge of the precise policies and authorities, I can help Texas combat Biden’s reckless and purposeful open border actions,” Harrison said.

Wray said his main objectives if he wins the seat include assisting with passing Republican priority legislation during the Special Sessions. He’ll also carrying local values and concerns to Austin for the Re-Districting Special Session during November.

“For the 2023 Regular Session of the Legislature, I want to continue my history of fighting for border security, lower property taxes, and fighting the High Speed Rail,’ Wray added. “I also support other Republican priority legislation, such as support for the Second Amendment, fighting for the unborn, opposing mask mandates, opposing over-reach and abuse of executive power as experienced during the pandemic, banning the teaching of CRT in public schools, and lowering government regulations.”

Ellis County GOP will have a candidate forum on September 7 at Texas Motorplex in the Champions Club at 6:30.

The date for the special run-off election for the District 10 seat has not yet been announced.