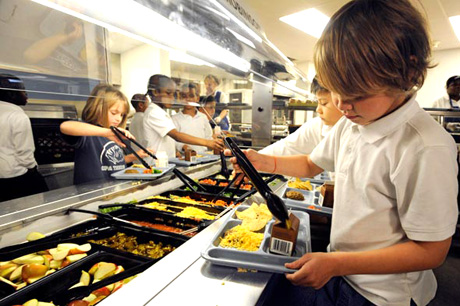 Giddings, D-DeSoto, authored the bill on May 9. She broke down what some schoolchildren are experiencing in Texas lunchrooms to lawmakers.

HB 2159 would make it unlawful for schools to single out students who have no money in their lunch account.

“In many school districts, if the child’s account has no money, their lunch is taken [and] it’s thrown in the trash, often in the face of that child.”

Unfortunately, the measure never made it to the floor, due in part to maneuvering from the House’s Freedom Caucus led by Republican Jonathan Strickland of Bedford.

A House rule, which can be used when lawmakers are debating bills on the local and consent calendar, allows a representative to give an opposition speech for ten minutes or allows five representatives to band together against a bill. If either of these happens, the bill will be knocked off of the calendar to be taken up at another time.

Bills on the local and consent calendar are placed there because they have a limited effect for some specific local area or because they are deemed to have the consent of the chamber to move forward.

” … to take the action that has taken place on this floor today, on this bill for hungry children, was unconscionable,” said Giddings during a prepared statement before the entire Texas House. “Some of the children this bill intended to help are from families just above the poverty line … Whatever the circumstance, we should not want these children to go without lunch.”

During a dramatic plea, Giddings painted a picture before lawmakers what a child as young as four may endure.

“Now, the hot meal is thrown into the trash, and the student is given the equivalent of this milk, these crackers, and this cheese [holds up items.] And I ask you, how humane is that? And would you want that to happen to your child? What message are we sending that child? A message that you don’t matter, that you have no value, that you have no worth.”

Giddings read statements from teachers not only in North Texas, but statewide, who have observed their students being shamed because they couldn’t afford lunch. An ardent protector of children, Giddings informed fellow lawmakers that this behavior wouldn’t stand.

“Members, we can do better for our children. They deserve better. And I personally believe that the hottest places in Hell are reserved for those who harm our children,” Giddings concluded. “And I think we’ve harmed our children today.”

This comes on the heels of a proverbial slap in the face to school children statewide. Constituents have discovered that this tactic wasn’t a onetime occurrence. In fact, Freedom Caucus members called the measure ‘an unfunded mandate’ and blocked the bill two weeks in a row. Rep. Strickland, Bedford, even threatened to call for a point of order on its subsequent attempts to be amended to a senate bills.

“I’ve received threats and snide remarks ever since bill went down,” said Strickland via twitter.
Keller resident Shane Hardin tweeted, “Might have been the only time in history that @RepStickland has been against anything relating to lunch.”

And there has been more of the same.

After Giddings’ plea was released on YouTube, educators and parents statewide rallied to her cause. Consequently, Feeding Texas CEO Celia Cole has partnered with Giddings to launch a grassroots effort to fund the lunch accounts of children in need.

“After my speech on the House floor, we were overwhelmed by the tweets, Facebook posts, emails, letters, and calls to my office. Most indicated they were not aware of this harmful practice that is so devastating to our children. Almost universally, the question asked was “what can I do to help?” We have communicated with over 200 individuals and associations who are committed to doing their part for our children. As a result, I am delighted to partner with Feeding Texas to launch an extraordinary campaign to raise money for unpaid lunch accounts of children in need.”

All Texans will have the opportunity to contribute directly to the fund at feedingtexas.org/schools.

“We applaud Representative Giddings and all who helped push this important issue into the legislative spotlight,” said Celia Cole, CEO of Feeding Texas, the statewide network of food banks. “We owe it to their efforts to continue raising awareness and supporting schools that treat hungry children with dignity and compassion.”

Giddings launched the initiative on Tuesday, May 23, at the state capital.

“Research indicates one of the primary impediments to learning is hunger. We can eliminate the pain of hunger in our schools,” said Giddings. “Our children do not need heroes … they just need compassion.”

Surprisingly, this week Strickland says he supports the Feeding Texas campaign and will make a donation.