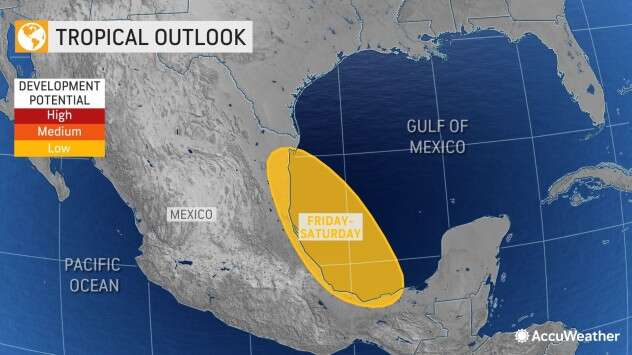 The disturbance is likely to find its way into the southwestern Gulf of Mexico by Thursday night.

AccuWeather Hurricane Center – August 17, 2022 – An area of disturbed weather over Central America could become the Atlantic basin’s next tropical depression or storm over the southwestern Gulf of Mexico by this weekend. As the system moves along, portions of South Texas and the Rio Grande Valley may be hit by another round of heavy rain about one week after a tropical rainstorm struck the region, AccuWeather meteorologists warn.

The system was producing a mass of clouds, showers and thunderstorms over the northwestern Caribbean as of Wednesday. Meteorologists say steering breezes could carry this feature on a northwestward path through the end of this week.

The track will take the system over portions of Nicaragua, Guatemala, Belize, Honduras and southeastern Mexico through Thursday. Interaction with land and hilly terrain is likely to prevent development in the short term, but downpours produced by the system can lead to dangerous flash flooding and mudslides in parts of the region.

The disturbance is likely to find its way into the southwestern Gulf of Mexico by Thursday night.

“Should the system stay over warm waters of the Gulf versus crawling along the coast of Mexico from Friday through Saturday, it could have enough time to organize, strengthen and reach tropical depression or storm status,” AccuWeather Meteorologist Matt Benz said.

AccuWeather meteorologists have given this tropical disturbance a low chance of developing into a more organized system from Friday to Saturday.

Land interaction will again be part of the formula for the system’s development chances. “If the disturbance takes a path that hugs the northeast Mexico coast, then it may be enough to deter significant strengthening,” AccuWeather Hurricane Expert Dan Kottlowski said. “But, if the storm forms over open waters in the southwest Gulf, there is a chance for rapid strengthening to occur.”

The forward speed of the disturbance is another factor. If the system moves too fast while over the Gulf, it may not have time to organize.

Even if this system fails to become a tropical depression or storm, a batch of showers and thunderstorms is likely to travel into parts of South Texas from Sunday to Monday. “The downpours can bring another boost in terms of drought relief to South Texas, but may also stir more trouble in terms of flooding,” AccuWeather Senior Meteorologist Heather Zehr said. A tropical rainstorm that originated over the western Gulf stopped just short of becoming a tropical depression prior to making landfall in Texas this past Sunday. That storm brought 5-10 inches of rain to the southern part of the state into Monday.

“Even though there will be about a week between storms, there is still a significant risk of renewed urban and low-lying area flooding with this next threat by early next week,” Zehr said.

Beyond Sunday and Monday, long-term track possibilities of this emerging tropical system range from a trip northwestward along the Rio Grande River to a more northward venture into central Texas next week. These possibilities depend on if the system is able to gain enough strength and then maintain some organization days after moving inland.

Much of central Texas could use a soaking rainfall, while areas farther northwest along the Rio Grande will face a higher flood risk as a result of the tropical rainstorm that moved through earlier this week. From June 1 through Aug. 16, San Antonio has received less than an inch of rain, compared to a normal of about 6.50 inches for the period.

Nearly 70% of the Lone Star State was in extreme drought with nearly 30% in exceptional drought as of last week’s United States Drought Monitor report. However, conditions in South Texas may have improved slightly in the wake of the recent tropical rainstorm.