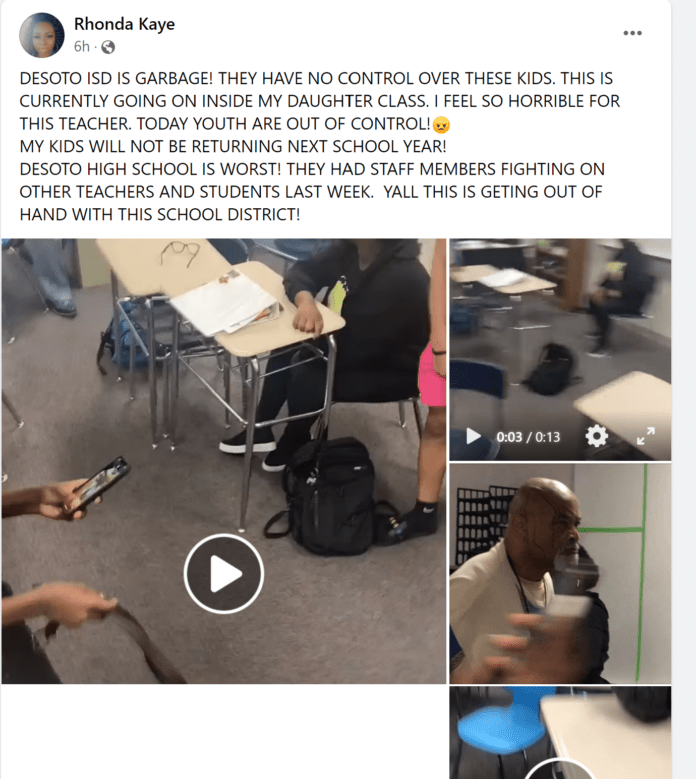 A disturbing video filmed on Wednesday, March 9, of chaos in a classroom shows what appears to be a teacher (adult) throwing chairs at a student.

The video was taken at DeSoto West by a student in the classroom, and posted on the Facebook page of parent Rhonda Kaye, Owner and CEO at Ascendancy Home Solutions and mother of four. The video can be viewed at https://www.facebook.com/rhonda.johnson.3517

Her post included four videos and her statement in bold capital letters reads:

“DESOTO ISD IS GARBAGE! THEY HAVE NO CONTROL OVER THESE KIDS.

THIS IS CURRENTLY GOING ON INSIDE MY DAUGHTER CLASS. I FEEL SO HORRIBLE FOR THIS TEACHER. TODAY YOUTH ARE OUT OF CONTROL!

MY KIDS WILL NOT BE RETURNING NEXT SCHOOL YEAR!

DESOTO HIGH SCHOOL IS WORST! THEY HAD STAFF MEMBERS FIGHTING ON OTHER TEACHERS AND STUDENTS LAST WEEK. YALL THIS IS GETING OUT OF HAND WITH THIS SCHOOL DISTRICT!”

The video shows a man, possibly a substitute teacher, throwing a chair at a student reportedly after the student had already thrown a chair and hitting him in the head, causing him to bleed. Screaming from students in the classroom can be heard on all four posted videos.

Within a few hours, over 60 comments were made on the Facebook Post – many about parents who should be instructing their children at home to respect their teachers. It had been shared over 6,000 times at the time this article was written.

Tiffanie Simon, a mother of three, was quick to point out she’s been dealing with problems in the DeSoto School system as well.

“The thing about it – it’s not just the middle and high schools. It’s even in the elementary schools. It’s so easy for people to say it’s the parents … but there is this climate in this district. I don’t know where it trickled down from, but there is no accountability for the students’ unruly behavior.”

She adds, “Let’s find a solution! There is a fundamental problem.” She believes the new, “re-direction” approach makes no sense. “The students who exhibit injurious behavior face no consequences. You can’t just call parents every day, then send the troubled student back into the classroom. There must be disciplinary action. They don’t suspend kids anymore. The students know they are not going to be sent to alternative school or suspended, so they act out. In large part, they aren’t doing this at home.”

She adds, “If you allow this type of behavior in elementary, with no consequences, and then into middle school and then high school – it’s no wonder you’ve got students throwing chairs. They’ve never been adequately disciplined.”

She points out that in the first week of school there was a giant brawl at DeSoto High School. She thinks part of the problem is the teacher shortage. “New teachers with no experience don’t know how to manage bad behavior in a student.”

Another issue is the outright disorganization at the schools. Her second grader had to wait until after noon on the first day of school to be assigned to a classroom. “It was a disaster at the school. By the time he got into a class, it was after lunch time.” She said he has been shuttled around from class to class all year and had 15 different teachers in the first semester.

One problem that is hanging over DeSoto ISD is the lack of a permanent superintendent. The most recent superintendent, Dr. Weaver, resigned last year, and the school district was left searching for a new one.

Ms. Simon says, “I attend the Town Hall Meetings and hear of millions upon millions of education funds coming into the district and more money on top of that through extra grants, so there should be way more extracurricular activities for the students, but there isn’t. Where’s our money going? Where are my school tax dollars going? Is the district wasting it on stupid stuff?”

Ms. Simon points out that the district is quick to point out the success of the sports teams but, “Our children have a LONG way to go – sports have little to do with academics. My child is in 2nd grade – he won’t be playing a high school sport for almost ten more years. He needs an education.” The DeSoto ISD website has “Together We Win” as it’s motto.

She worries for the safety of her son. “The problems in DeSoto are so much so much bigger than that – what’s stopping kids from bringing guns to school? Or Knives? And why are we getting to a point where these kids are getting so riled up they’re throwing chairs at teachers? Are there no security or police officers in the hallway?”

She says when there is an altercation or a fight, female teachers and coaches are “suddenly coming out of the woodwork to help stop it. But the kids causing the trouble don’t get expelled.”

She noted that recent Town Hall meetings only had about 30 people attend. Part of that issue is parents who want change don’t know where to go to get it. And the behavior that could get a student suspended – or expelled – isn’t clear.

From Good to Bad

Ms. Simon moved into the DeSoto district last fall from Cedar Hill and says, “The Cedar Hill District made sense. We were in the school system there since Kindergarten, and never had any trouble at school. The kids did virtual for three weeks last year and then were in school for the entire rest of the year. There were no outbreaks of illness, no problems.”

Since the move, however, it’s been all bad. “But it’s so drastically different in DeSoto. It’s like there’s an elephant in the room that nobody wants to address. They’ve been closing the schools down, funneling kids into different schools. The ISD split the elementary schools up now and some parents must go to multiple elementary schools for their children, who are all in elementary. Imagine going to three different schools!”

There are currently 3,000 unaccounted for children in the DeSoto District, according to Ms. Simon, who believes they are being bussed out. “And they can’t retain any Caucasian students – those are going to private schools their parents are paying for.”

Ms. Simon said she attended schools in Keller when she was a young student, and only 2% of her school was minority. “I faced racism, but I also got an education. If a student acted badly, they were sent home or on to an alternative school so the rest of us could learn.”

She said, “We’ve got to start at Ground Zero in DeSoto, what’s happened now just is not working.”

Her two other children are in pre-school with seasoned teachers who have experience, so there’s no problems they can’t handle. “New teachers have no experience with these real-life situations, children coming from one-parent households, maybe living in poverty.”

And she says there are students coming to DeSoto schools from south Dallas and Lancaster who are being allowed in. School districts get paid per student, usually by attendance at 10 a.m. This is another concern, creating more issues for inexperienced teachers with a student population in flux.

Ms. Simon remembers, “When I grew up you had to live in your school district to go there. You couldn’t attend a school just because your mama could drive you out there.”

Now she’s trying to figure out how to get her son into a safer school district.

“The Desoto Police Department has been made aware of several videos circulating social media involving a teacher and several students from DeSoto West.

We would like to make our citizens aware that all sides of the incident are currently under investigation. In response to the videos, tomorrow there will be a larger police presence at Desoto West to prevent any further incidents. The safety and security of our children is our top priority.

Tomorrow is scheduled to be normal school day. Please follow your normal school routine as you would any other day unless told otherwise by DeSoto ISD.”