DESOTO—Top 5 BBQ — which had gained prominence as not just one of the most beloved restaurants in DeSoto, but in the state, is in trouble. The barbeque purveyor was a hit with A-list entertainers such as Jay-Z and Beyonce, as well as Justin Timberlake, David and Tamela Mann, and Fred Hammond request its catering whenever they perform in Dallas.

The restaurant, since it began selling food out of a trailer in 2013, had been even a bigger hit with the DeSoto community, especially DeSoto High School, where Top 5’s owner, 38-year-old Kendon Greene, formerly worked as a security guard.

Greene and Top 5, over the years, have employed students from DeSoto High School and the district’s alternative education program (DAEP), fed students for free as a way of further serving the community surrounding them and named meals after loyal customers.

If there’s a need to be met, a way he can help improve someone else’s life, Greene has been up front and center.

But because of unfortunate circumstances, including his father, Pastor Kenneth Greene, 64, suffering a massive stroke, from which he is still recovering; the poor heart condition of Kendon’s son, Kameron, 9, who has special needs; the recent loss of his father-in-law; and about $120,000 in loans and other mounting bills, Kendon Greene was forced to suspend Top 5’s operations indefinitely in the first week of March.

“The bills just never stopped coming in,” says Greene, who also mentions having to shell out thousands of dollars for major maintenance work in both the facility Top 5 rented on Pleasant Run Road, next door to Wing Stop, and the more recent one on Hampton Road, near its intersection with Pleasant Run.

The time frame Greene references in which they were out of operation before they moved into their most recent location was from July 27 to Oct. 5. On Oct. 6, Top 5 was back in operation again. But by that time, the damage was done. It could never recover from its financial hit.

About three weeks ago, Greene’s wife, Davetta, created a page for donations, http://www.gofundme.com/savetop5, set up to help Top 5 regain its financial footing and re-launch. The amount Top 5 is trying to raise on the website is $50,000, at least. At press time, $16,000 had been donated.

While Greene’s family was consumed with surviving medical woes on one end and grieving the death of a loved one on another, Top 5 continued its downward spiral financially.

Asked whether there was anyone outside of his family who could’ve stepped in to run the restaurant in his absence, Greene says one employee comes to mind but that person’s training was limited.

Greene has since made that employee, Drew Bobbitt, general manager. Bobbitt is now better-groomed to take over at the helm, in case of an emergency, when Top 5 resumes with its operations.

When University of North Texas student-athlete Bryce English, who was a student at DeSoto High when Greene worked there, heard about Top 5’s struggles, his knee-jerk reaction was to launch a “Save Top 5” campaign on social media.

Community Launches Campaign To Save Eatery

“As soon as ‘KG’ (Greene) told me the whole story about what was going on with Top 5, about it having to be shut down due to insufficient funds, I decided to go ahead and do a (video) documentary, going out and finding people in the community of DeSoto and at the high school where he was a security guard at and seeing what positive words of encouragement they had for him,” says English, a 2015 graduate of DeSoto High.

“He and I talk all the time,” English says. “The power and the words of encouragement and the guidance he’s given me throughout my time in high school and in college, to this day, I have been able to do the same thing for other students or high school students who come to me for advice.

“All the advice he’s given me, I’m able to give right back to the same people who are in the position I was in,” English says.

English, who is pursuing a Bachelor’s degree in business, is just one of many youths whose lives Greene has touched in a profound way.

“When I first started Top 5, my whole vision was not even to have a restaurant. I really wanted a trailer to give young black and Latino entrepreneurs who couldn’t afford to start a franchise an opportunity to get their businesses started,” Greene says. “I wanted to be able to say to them, ‘So, now you’re a business owner.’”

Greene’s heart for youths compelled him to provide them with much more than lip service.

“We took pride in looking at these ‘knuckleheads’ and giving them a chance to help them turn their lives around. Did we get to help all of them? No, but we watched Simba, Keenan, I can go on down the list of names (of kids) we’ve seen mature over the years,” Greene says as he proudly talks about the many young people he employed at Top 5 BBQ while they were troubled students at DeSoto High School.

Top 5 BBQ was named one of the top 50 barbecue spots in Texas by Texas Monthly; the No. 8 best barbecue place in Dallas-Fort Worth by D magazine; and the best barbecue eatery by the Dallas Observer. Top 5 BBQ continues to have a presence on Facebook, Instagram and Twitter. Greene has plans to re-launch operations out of a newly acquired trailer in a month. 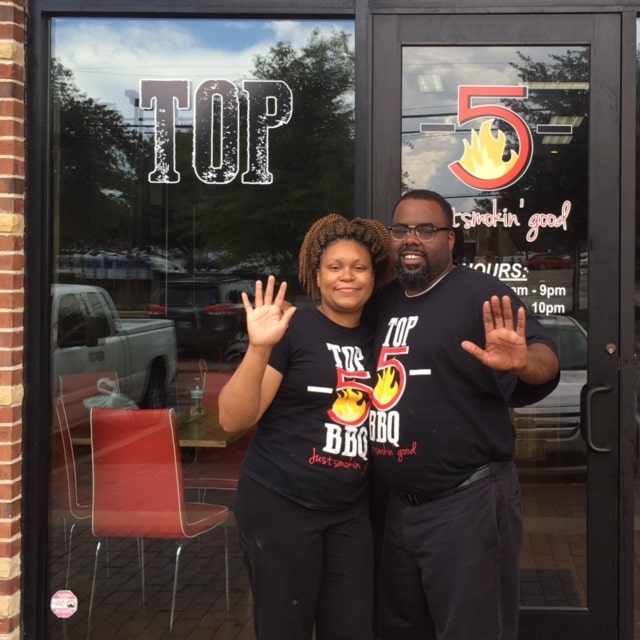