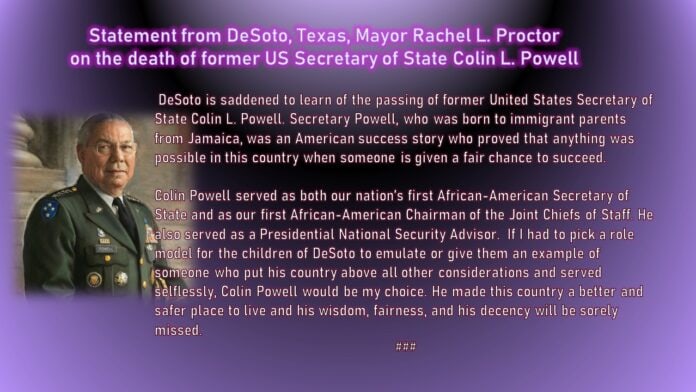 Statement from DeSoto, Texas, Mayor Rachel L. Proctor on the death of former US Secretary of State Colin L. Powell

DeSoto is saddened to learn of the passing of former United States Secretary of State Colin L. Powell. Secretary Powell, who was born to immigrant parents from Jamaica, was an American success story who proved that anything was possible in this country when someone is given a fair chance to succeed.

Colin Powell served as both our nation’s first African-American Secretary of State and as our first African-American Chairman of the Joint Chiefs of Staff. He also served as a Presidential National Security Advisor. If I had to pick a role model for the children of DeSoto to emulate or give them an example of someone who put his country above all other considerations and served selflessly, Colin Powell would be my choice. He made this country a better and safer place to live and his wisdom, fairness, and his decency will be sorely missed.