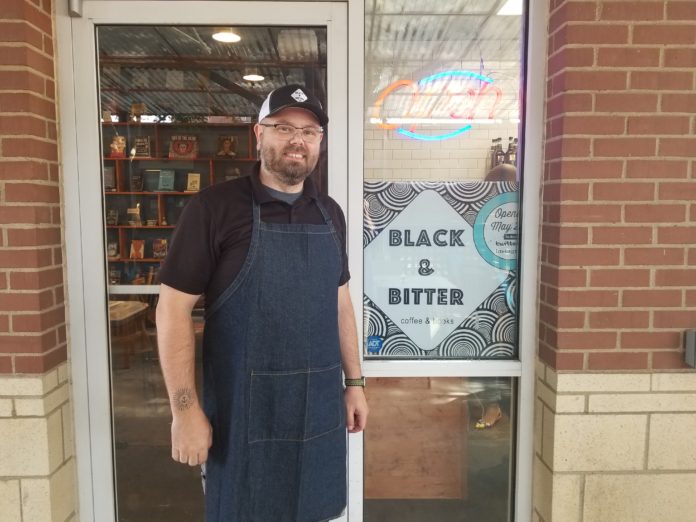 The cozy coffee shop was carved from the neighboring Rice Pot in the building owned by Developer and City Councilman Monte Anderson. A side patio offers an additional seating and lounge area.

Kaeser says the coffee shop uses the “roasting expertise of Counter Culture Coffee from Durham, North Carolina. We are striving to build a community-driven space where several neighborhoods will feel right at home. We are partnering with the Duncanville Outreach Ministry to donate a portion of our sales monthly, giving back to the community. We’re also using biodegradable plastics and straws to be environmentally conscious.”

After stopping by to meet Bryan and a few of his employees, I can personally vouch for my cup of delicious dark roast coffee. It was made exactly the way I asked, with milk and honey. Since I’m trying to diet (again) I didn’t try any of the yummy-looking muffins and sweet rolls on display.

Kaeser spent 20 years in retail management and five in restaurant management. He owned Dallas Beer Kitchen on Greenville Ave. prior to opening his new concepts in Duncanville. A Kansas City transplant, Kaeser and his wife live in Cedar Vista near Duncanville with their Boxer mix, Peanut.

“Mudhook is a burger and craft beer mecca with a full bar,” Kaeser said. “My expertise from running Dallas Beer Kitchen in Dallas will lend itself to fantastic American food. There will be a lively atmosphere for the nighttime crowd in Duncanville. Our approximate opening date for Mudhook is by the end of July, but will be pending construction,” he added.

Menu items at Mudhook will include made from scratch burgers, such as those topped with thick slices of bacon and cheese. Specialty sandwiches, onion rings, and hand-cut fries are also on the menu. Burgers and sandwiches like his grilled chicken club with avocado and pesto (popular at DBK) will use buns and sourdough bread from Village Baking Company in Dallas.

The bar will have 12 beer taps, offering eight craft and four domestic beers. It will also feature a large outdoor patio.