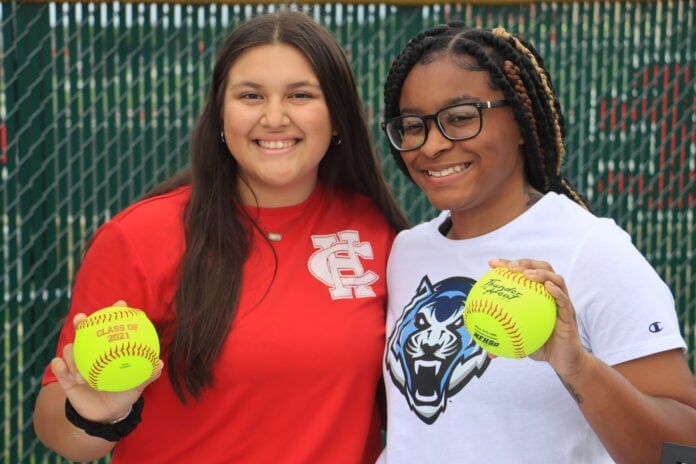 Ready For Their Next Chapter

They’ve experienced several ups and downs – from going to the playoffs as freshmen in 2018 to the cancellation of much of their junior season due to COVID-19 in 2020. They had three head coaches in four seasons, and they were leaders on a 2021 team that won four district games and nearly defeated a team ranked in the Class 6A Top 10.

Now, Pacheco and Parram are ready for their next chapter, as they prepare for their final varsity game. They will host Mansfield – either tonight or Monday – depending on the weather.

“They are amazing, and they’ll both make a huge impact at the college level,” said Cedar Hill head softball coach Jennifer Davis, a 2004 CHHS Graduate who played college softball at UTEP.

She realized that being just under 100 miles away would be easier than being a thousand miles away.

“It will be nice to come back some weekends and visit my family and friends,” Pacheco said.

Davis said she’s confident that Pacheco, who earned district victories over DeSoto (twice), Duncanville and Waco on the mound this season, will have an opportunity to play NCAA Division I Softball after two seasons at TVCC, which is 26-12 so far this season.

Parram, an outfielder and leadoff hitter, verbally committed to Langston, an HBCU in Oklahoma, last fall but changed her mind.

She said that Lincoln is a better fit. The Blue Tigers compete in the Mid-America Intercollegiate Athletic Association (MIAA) against schools from Missouri, Kansas, Nebraska and Oklahoma.

Most of Lincoln’s players are from Missouri, so Parram will be one of the team’s first recruits from Texas.

She has family nearby, as her parents moved to Cedar Hill from the St. Louis area approximately 20 years ago.

“I’m looking forward to playing at Lincoln, but I’ll miss my friends and family,” Parram said.